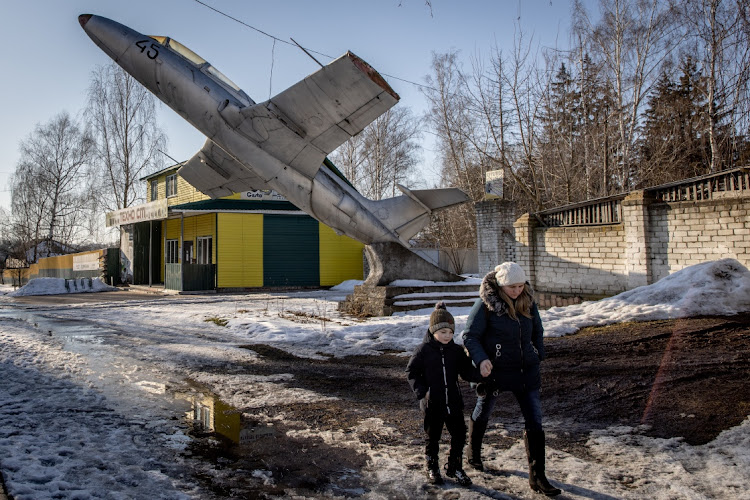 A woman walks underneath a military plane set as a monument to a former military base at a town on the outskirts of the Three Sisters border crossing between, Ukraine, Russia and Belarus on February 14, 2022
Image: Chris McGrath/Getty Images

The teens, tweens and adults of Gen Z are turning to TikTok and Instagram to hash over the tensions between Russia and Ukraine, some appealing to a leader they call “Vladdy Daddy” to refrain from starting a war.

TikTok videos have also become a source for researchers tracking Russia's build-up of more than 100,000 troops near its border with Ukraine, though Moscow denies Western accusations that it is planning to invade its neighbour.

Social media users left thousands of comments on Instagram posts from unofficial Russian President Vladimir Putin accounts in recent weeks. A Meta Platforms spokesperson said they are not aware that Putin has any official presence on Facebook and Instagram.

The nickname “Vladdy Daddy”, which can also have sexual connotations, became popular on the internet about 2016 according to meme database Know Your Meme.

Generation Z, considered by researchers to be people born from the late 1990s to the early 2010s, includes Hanka, a 12-year-old in Slovakia who learned of the meme through TikTok and posted “Vladdy daddy please no war..." in the comments on one of the accounts.

Others left comments such as “Mercurys in retrograde Vladdy this isnt you...”

“Me and my friends were playing truth or dare and they dared me to type that,” Hanka, who asked only to be identified by her first name, said in a phone interview.

But the meme drew criticism on Twitter from Lena, 16, who lives in Poland.

“I don't think that people that live far away and see it only as a meme or as a joke should be joking about it, because it's a serious situation,” Lena, who asked to be identified only by her first name, said in a phone interview.

TikTok did not respond to a request for comment on whether there was any evidence of co-ordinated behaviour to mislead people about the trend.

Many of the messages and videos do not say where they are being posted from.

TikTok is one of the most popular social media platforms in Russia, with a monthly reach of more than 40 million people, according to research company MediaScope.

FROM DANCE TO POLITICS

TikTok has seen explosive growth in recent years. While the app owned by Chinese tech company ByteDance was known in its earlier days for teens' viral challenges and dance trends, it has increasingly become a destination for political content.

“It's just interesting the way that TikTok kind of connects younger audiences to politics and world events,” said Nina Jankowicz, a researcher who works with the UK-based Centre for Information Resilience to verify open source content about the crisis. “No other platform really has done that to the same degree.”

But she believes the online engagement is unlikely to generate offline action, such as large scale protests.

Videos explaining the Russia-Ukraine crisis have also been circulating, some from the West and others that appear to be from Russia.

Myca Hinton, a 21-year-old student at Fordham University in New York who posts news and commentary videos on TikTok, has received thousands of views on her videos about the crisis. She hopes they will help high school students better understand what they learn in school and inform college students who might not watch TV or have newspaper subscriptions.

Hinton said she tailors her language to a younger audience, adding puns and easy-to-understand words.

“I think that TikTok has definitely played a huge role in where we get our information or where we sort of formulate our opinions, just because that is the app that everyone's on right now,” said Hinton, who posts under the handle @mycahinton.

Russian-language videos explaining the crisis have also been posted, in addition to videos purportedly showing military equipment on the move.

One user, Maxim, with 29,000 followers and who uses the handle @novosileckij, has racked up almost 1 million views for an explainer video expressing doubt that Russia will actually invade Ukraine.

For open source researchers, TikTok videos posted by users in the region have also been used to track military equipment.

Michael Sheldon, a research associate at the Atlantic Council's Digital Forensic Research Lab, says through TikTok he has been tracking military equipment from Russia. This was one of the first military build-ups where the app was a major source for his research, Sheldon said.

“TikTok is one of the main games in terms of visual information collecting on the build-up,” Sheldon said, adding that about 80% of his open source analysis of the build-up was coming from TikTok.

The U.S. State Department declined to comment on whether it has used TikTok videos from bystanders in tracking the build-up.

Jankowicz said that young people in Russia risk their futures when posting on social media, citing arrests over Facebook and Instagram posts. Russia has put pressure on major social media companies through fines and slowdowns to remove banned content.