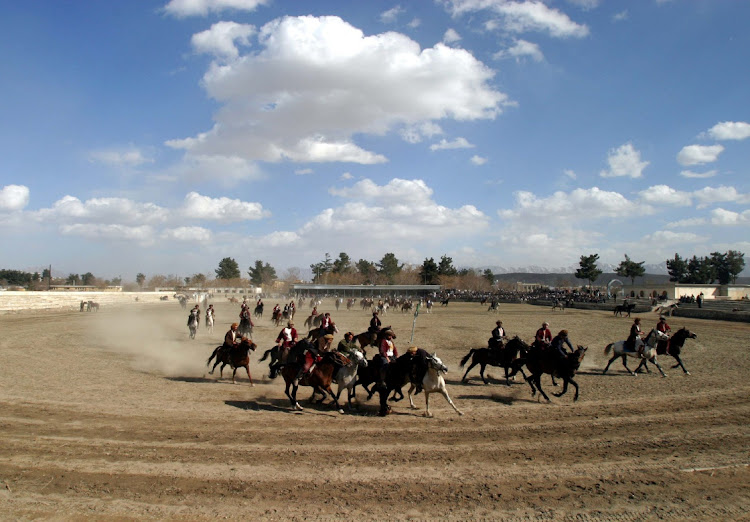 A knockout match was played last week between the Kandahar and Badakhshan provincial teams in front of about 5,000 Afghans, including members of the Taliban.
Image: REUTERS/Ahmad Masood/File Photo

Dust rises as men spur their horses onto a field, signalling the start of another game of buzkashi, Afghanistan's often-violent national sport designed to showcase the riders' horsemanship and warrior spirit.

Buzkashi, which translates roughly as “goat pulling”, has been played for centuries across Central Asia. Similar to polo, the sport involves two teams trying to accumulate points by propelling a headless goat carcass to the scoring area. These days, fake goat carcasses are used.

Amid foreign invasions, civil wars, insurgent attacks, and more recently, the resumption of Taliban rule, Afghans have always gathered to cheer on their favourite “chapandaz”, as the riders are known.

National league matches resumed on Feb. 24 for the first time since the Taliban took over in August last year.

A knockout match was played last week between the Kandahar and Badakhshan provincial teams in front of about 5,000 Afghans, including members of the Taliban.

Previous games were often shadowed by fears of attacks, and players faced threats from people in their own province if they played for another provincial team.

But the Taliban's harsh crackdown on crime has eased the minds of many, including Gulbuddin Ismail Khail, captain of the Kandahar team, last year's league champion.

“We had a good year last year, but this year is even better, because people are cheering for all teams with a calm mind,” said the 37-year-old, who is from Balkh province, but has chosen to play for the Kandahar team, which won the match.

For fans, the game's significance will weather the country's current crisis, just as it has outlasted previous wars.

“Although there is a lot of poverty and unemployment in our country, we still came from Balkh province to watch this game, because we are very interested in the sport,” said audience member Abdul Saboor.