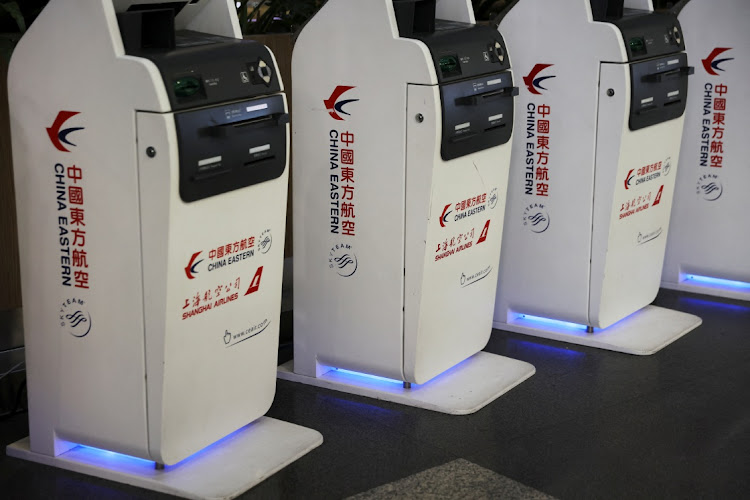 There were 132 people on board -- 123 passengers and 9 crew -- and the plane went down in a mountainous area near the city of Wuzhou, according to the Civil Aviation Administration of China.

China Eastern said it will ground all of its Boeing 737-800 jets starting Tuesday. An emergency telephone assistance line for family was set up and the carrier expressed deep condolences to passengers and crew members onboard.

China Eastern’s website, mobile app and some of its social media platforms were turned to black and white in a sign of mourning.

Flight MU5735’s sudden descent was interrupted briefly when it actually climbed, according to data posted by FlightRadar24. 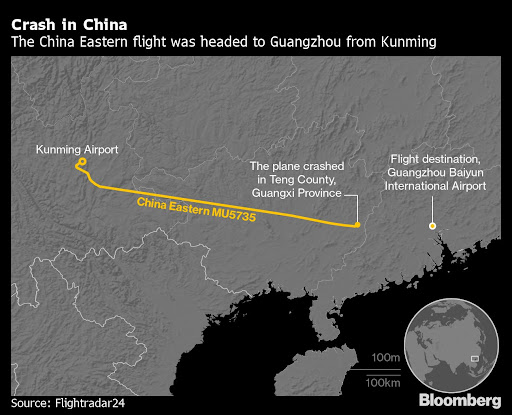 The plane was headed easterly when at 2:20:59pm it began a sudden plunge that would have likely flung objects and any unbelted passengers violently to the ceiling. It went from level flight to a descent rate of almost 31,000 feet per minute in about five seconds.

But after about 45 seconds, the descent became less steep and for a few moments the jet climbed by more than 1,000 feet. It went from 7,425 feet up to 8,600 feet in about 10 seconds, according to the FlightRadar data, which is based on data transmitted by the plane. Just as the earlier dive would have flung items to the ceiling, the climb would have created huge gravitational forces, pinning people in their seats.

The climb was short-lived. The jet resumed its dive seconds later, plunging again at about 31,000 feet per minute. The last position recorded on the FlightRadar track was at 2:22:36pm, about a minute and 35 seconds after it began.

It’s not clear what would have triggered such an extreme maneuver. The jet turned to the right and left slightly during the descent, but remained on a mostly easterly heading.

China has a strong record when it comes to aviation safety, with fatal commercial aircraft crashes unheard of in recent years and airlines operating millions of flying hours without incident.

The nation’s last fatal crash was in 2010, according to Aviation Safety Network, when a Henan Airlines Co. Embraer SA jet carrying 96 people crashed in Yichun in the northeast, killing 44.

China’s worst aviation disaster was back in 1994, when a China Northwest Airlines Tupolev Tu-154 crashed after taking off from Xi’an in Shaanxi province en route to Guangzhou. All 160 people on board died.

Crashes Tend Not to Be Design Issues (8:48pm Beijing)

The leading causes of commercial air transport crashes tend to be maintenance issues, pilot error or sabotage, not a manufacturing or design issue, Cowen & Co. analysts led by Cai von Rumohr wrote in a note Monday.

“And for a plane that is seven years old and has been in commercial service since 2015, it seems less likely, although not impossible, that the cause would be a design or manufacturing issue,” according to the report, which noted that because the plane went down in a wooded area as opposed to over the ocean, it should be easier to recover the cockpit voice recorder.

The cancellation rate for China Eastern flights is running at around 82% for the remainder of Monday and Tuesday, local media reported. The carrier’s app would also appear to show that all flights from Beijing are canceled this evening.

Tickets on flights from Kunming to Guangzhou, the route of the crash, weren’t available for purchase.

Family members of the passengers are being settled at Terminal 1 at Guangzhou Baiyun airport, many crying uncontrollably.

A cargo driver with the surname Li was driving on the highway from Nanning, Guangxi’s provincial capital, to Wuzhou when he saw an aircraft in free fall.

“I was about two to three kilometers away, I couldn’t hear the sound but the black smoke was there, it looked like an explosion,” Li told local media. He said the whole incident only took a few seconds and by the time he was shooting with his phone, he could only capture smoke.

“It was so horrible, I only just realized later on there were more than 100 people on the flight.”

The Federal Aviation Administration said in a statement that it is aware of reports of the crash and is ready to assist in investigation efforts, if asked.

The Boeing 737-800 NG model that crashed is considered one of the safest aircraft ever made. The single-aisle jet is part of the NG, or Next Generation, era that preceded the 737 Max, which was subjected to a global grounding after two deadly crashes.

The NG has one of the best safety records among all aircraft, with just 11 fatal accidents out of more than 7,000 planes delivered since 1997, according to aviation consultancy Cirium. The China Eastern jet involved was about six years and 10 months old, according to FlightRadar.

Read more: Boeing 737 in China Crash Has Good Safety Record, Unlike the Max

“I wouldn’t expect today’s crash to have any bearing on the Max return to service in China,” aerospace industry analyst John Strickland said.

Prior to Monday, there had been 22 hull losses -- aircraft damaged beyond repair -- with a total of 612 fatalities, according to the Flight Safety Foundation’s Aviation Safety Network.

Flight MU5735 was traveling at an altitude of 29,100 feet at 2:19 p.m. local time when it went into a steep decline, according to FlightRadar24 tracking data. The aircraft then fell at speed more than 25,000 feet in less than three minutes to an altitude of just 3,225 feet when tracking data ended.

China Eastern will ground all of its its Boeing 737-800 passenger flights from Tuesday, Chinese media outlet Yicai reported, citing sources. The carrier has 102 of that particular variety of jet.

Videos of where the plane apparently crashed showed a significant fire in a green, heavily wooded area. The jet appeared to land on the side of a hill near what looks like a stone building of some kind. Guangxi is famed for its unique terrain, with the northeast of the province home to sheer limestone peaks known as karsts.

The plane crashed near the city of Wuzhou on Guangxi’s border with Guangdong. It was headed to Guangdong’s capital, Guangzhou.

China Eastern Airlines passenger jet has 'accident', 133 passengers on board

The jet involved in the accident was a Boeing 737 aircraft.
News
3 months ago

The crash comes at a bad time for Boeing, which is preparing for the re-entry of its 737 Max into commercial service in the country, a lucrative aviation market. Bloomberg News reported earlier this month that Boeing had flown a Max to its completion and delivery center in Zhoushan, China, for the first time since the model received recertification.

China was the first major aviation market to ground the Max three years ago after the second of two fatal crashes that killed 346 people in total, and one of the last to see its return. The market is so large that Boeing’s plan to further ramp up production depends on the resumption of deliveries to China.

Boeing shares were down as much as 8% in premarket trading in New York.

President Xi Jinping said the country should step up all rescue efforts after the crash and urged officials find a reason for the incident as soon as possible.

The British Airline Pilots Association (BALPA) says on Twitter that its thoughts are with those affected by the crash. “With rescue efforts ongoing, we ask the media to allow space for the operation and allow authorities to undertake accident investigation without speculation,” General Secretary Martin Chalk adds.

The last fatal crash involving Shanghai-based China Eastern was in 2004, when an airliner bound for the financial center crashed in Inner Mongolia, killing 53 people on board and two people on the ground. That was the worst aviation accident in China in 30 months at the time.

The last major incident at the airline was in June 2013 when an Embraer SA jet skidded off the runway while landing in Shanghai, according to Aviation Safety Network.

China Eastern is one of the country’s three major carriers, along with Air China Ltd. and China Southern Airlines Co.

China Eastern released a statement confirming the facts of the crash and adding details of an emergency assistance phone line for family members.

China Eastern’s website, mobile app and some of its social media platforms were turned to black and white in a sign of mourning.

Eyewitness videos posted to social media showed a forest fire on a mountainside at what was purported to be the crash site. China Central Television said the blaze that was triggered by the crash has now been put out.

The China Civil Aviation Authority, or CAAC, confirmed the crash in a statement on its website. CAAC said there were 123 passengers and nine crew on board.

The regulator said it dispatched working group to the scene and initiated an emergency response.

It’s unclear whether there will be a media briefing or further communication from the regulator. Link to statement (in Chinese) here.

Two die in 'horrific' crash on the N1 in Joburg

Two people died early on Sunday morning in what rescue paramedics described as a “horrific” motor vehicle collision on the N1 in Johannesburg.
News
3 months ago

A man suffered a fatal heart attack after he crashed his SUV into a concrete structure in Umhlanga on Monday.
News
3 months ago

At least two people have been confirmed dead in an accident involving a fuel tanker and a long distance bus.
News
3 months ago