Ukraine appeals to Russia over Mariupol as humanitarian concerns grow 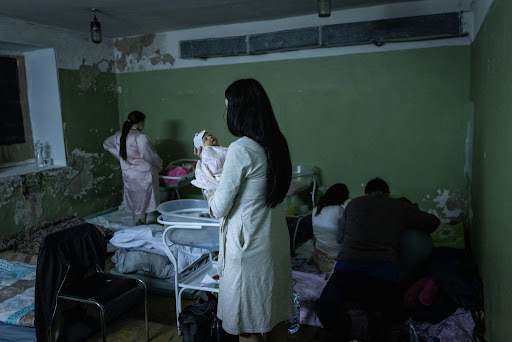 Ukraine appealed to Russia on Tuesday to allow humanitarian supplies into Mariupol and let desperate civilians out of the besieged city, which President Volodymr Zelenskyy says has been devastated by Russian bombardment.

Officials in Mariupol said the port city on the Sea of Azov, which has a peacetime population of 400,000, has no food, medicine, power and running water.

Mariupol’s plight highlights what an international aid official in Ukraine said was a breakdown in the country’s humanitarian system.

“There is nothing left there,” Zelenskyy said of Mariupol in a video address to the Italian parliament.

As he was speaking, the city council said Russian forces had dropped two large bombs on Mariupol but gave no details of casualties or damage. Reuters could not independently verify the report. Russia did not immediately comment on it.

“Again it is clear the occupiers are not interested in the city of Mariupol. They want to level it to the ground and make it the ashes of a dead land,” the council said in a statement.

EXPLAINER: How could Russia's Putin be prosecuted for war crimes in Ukraine?

US President Joe Biden has publicly called Russian President Vladimir Putin a war criminal, but legal experts said a prosecution of Putin or other ...
News
4 months ago

Russia denies targeting civilians and blames Ukraine for the repeated failure to establish safe passage for civilians out of Mariupol. Ukraine defied an ultimatum for the city to surrender by dawn on Monday as a condition for Russian forces to let civilians leave safely.

“We demand the opening of a humanitarian corridor for civilians,” deputy prime minister Iryna Vereshchuk said on Ukrainian television on Tuesday.

Vereshchuk said Mariupol was the main focus of government evacuation efforts, and that Russian forces were allegedly preventing humanitarian supplies reaching residents of the occupied southern city of Kherson. She gave no details.

“We know most municipalities in areas seeing the most intense fighting don’t have more than three or four days worth of essentials like food,” Gordon, who is in Ukraine, said in a statement issued by Mercy Corps.

“The reality is that the humanitarian system is entirely broken down. We are not seeing a high-functioning, co-ordinated international aid effort covering the whole of Ukraine, like we often see in other conflict zones.”

Only a few thousand civilians have managed to flee Mariupol, including a convoy witnessed by Mercy Corps.

“The cars are all taped together with duct tape and plastic, packed with seven or eight people in each car. Many of the cars display ‘child’ signs on windows in the hope this would prevent them being attacked,” he said.

“Some have belongings strapped to the roof but many have nothing and you can tell people had to leave everything behind.”

Russia calls its actions in Ukraine a “special military operation” to disarm the country and protect it from “Nazis”. The West calls this a false pretext for an unprovoked war.

Capturing Mariupol would help Russian forces secure a land corridor to the Crimea peninsula, which Moscow annexed from Ukraine in 2014.

Pope says 'slaughters and atrocities' are committed daily in Ukraine

Pope Francis, continuing his implicit criticism of Russia, called the conflict in Ukraine an unjustified "senseless massacre" and urged leaders to ...
News
4 months ago

Ukrainian President Volodymyr Zelenskyy said peace talks are Russia’s “only chance” given the growing number of countries imposing sanctions against ...
News
4 months ago