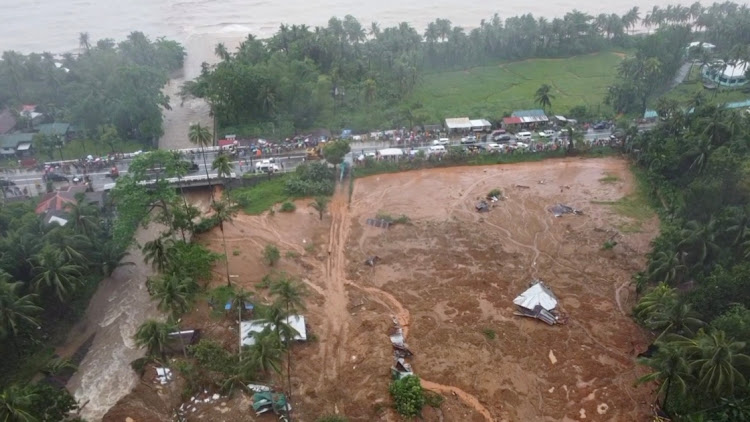 A general view shows damages after a landslide caused by tropical storm Megi, that hit Philippines' eastern and southern coasts, in Baybay city, eastern province of Leyte, Philippines, in this still image taken from a video April 11, 2022.
Image: Video taken with a drone April 11, 2022. Courtesy As You Wish Photography/via REUTERS

The Philippine military pledged on Thursday to keep up search and rescue efforts after tropical storm Megi ripped through central areas this week, burying many under landslides and killing at least 123 people.

Megi was the first cyclone this year to hit the Philippines, an archipelago of more than 7,600 islands that sees an average of 20 tropical storms a year.

Eighty six of the casualties were in Baybay, a mountainous area prone to landslides in Leyte province, where 236 people were also injured, the city government said in a report.

“The search, rescue and retrieval operations will continue,” a Philippine Army infantry unit in Baybay said on Facebook.

Aerial photographs and video from the local government showed collapsed slopes, burying coconut plantations and houses in dirt and mud. In one area, rescuers had to use rubber boats to reach a landslide.

Philippine authorities on Wednesday struggled to distribute aid to tens of thousands of displaced people sheltering in evacuation centres after ...
News
3 months ago

Megi, which made landfall on Sunday with sustained winds of up to 65 kilometres (40 miles) per hour and gusts of up to 80kph (49mph), has since dissipated.

The district of Kantagnos had been “greatly devastated”, an army engineering and construction battalion on Leyte said on Facebook. “Homes and livelihoods have been damaged, families and individuals are missing and communication have been unstable,” said the post.

More than 162,000 displaced residents are sheltering in evacuation centres, while a further 41,000 are living with relatives, government data showed.

Megi's destructive path has revived memories of other deadly storms in the Philippines.

In December, category 5 typhoon Rai ravaged the central Philippines, with the death toll reaching 405 and nearly 1,400 injured. Typhoon Haiyan, one of the most powerful tropical cyclones ever recorded, killed 6,300 in 2013.