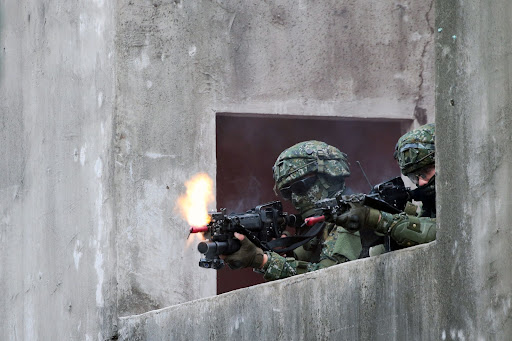 A television news channel in Taiwan apologised after erroneously reporting on Wednesday that China had launched an invasion outside the capital Taipei.
Image: Bloomberg

A television news channel in Taiwan apologised after erroneously reporting on Wednesday that China had launched an invasion outside the capital Taipei, triggering alarm online.

Taipei-based Chinese Television Systems (CTS), a TV network partially owned by the Taiwanese government, ran a ticker along the bottom of the screen at 7am local time on Wednesday, saying China had attacked several areas in New Taipei City.

“New Taipei City has been hit by a Chinese communist guided missile. Ships in Taipei port have exploded, damaging facilities,” the graphic read.

“Banqiao Station is reported to have been set on fire by explosives placed by special forces.”

The station issued an apology live on air a few hours later. They said the chyron had been prepared for a disaster-prevention video produced for the New Taipei city fire department a day earlier, and was broadcast on Wednesday due to a production error.

The ministry of national defence had asked municipal governments to include the Chinese invasion scenario in a video as part of an annual drill, Huang De-ching, commissioner of the New Taipei city fire department, said by phone.

“This is for the drill of national defence mobilisation and disaster prevention,” he said.

“The defence department asked us to include the scenario of a China attack. We have that scripted in the start of the video.”

With much of the world’s attention focused on Russia’s invasion of Ukraine, fears have grown among some analysts that China may make good on its long-held threat to take control of Taiwan by force if peaceful means fail. While there’s no sign an invasion is imminent, particularly in a sensitive political year for Chinese President Xi Jinping, Beijing has steadily upped its military, diplomatic and economic pressure on Taiwan in recent years.

Last year, the People’s Liberation Army more than doubled its flights into Taiwan’s air-defence identification zone to almost 1,000 sorties. China has also regularly blasted Taiwan for strengthening ties with the US.

CTS is currently deliberating whether to issue a more detailed statement on the broadcast, a spokesperson for the company said via telephone.

Shanghai reported a record number of symptomatic Covid-19 cases on Saturday and other areas across China imposed restrictions as the country kept up ...
News
3 months ago

'You cannot show your tears to anyone': Ukrainian ambassador to SA Liubov Abravitova

Tears well up in Ukrainian ambassador to SA Liubov Abravitova’s crystal blue eyes when she speaks about the atrocities being committed by the Russian ...
Politics
3 months ago