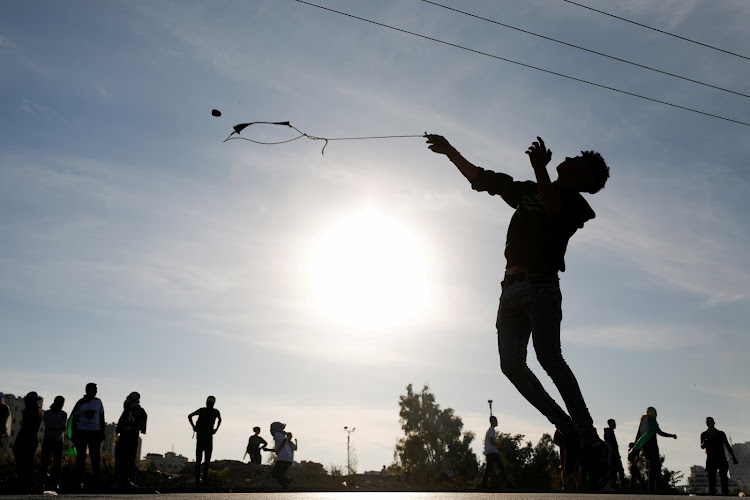 A man swings a slingshot as Palestinians clash with Israeli troops during a protest near Ramallah in the Israeli-occupied West Bank. A member of the executive committee of the Palestine Liberation Organisation this week urged Palestinians to step up their struggle in the face of the latest settlement projects. File Photo.
Image: Mohamad Torokman

Israel on Thursday approved the building of 4,427 new homes in its settlements on occupied West Bank land where Palestinians seek statehood, a watchdog group said about the plans that have drawn US criticism.

Peace Now, an anti-settlement group, provided the figure after a meeting of Israel's Higher Planning Council, which convened to ratify the construction. At the meeting, 2,791 homes received final approval and 1,636 received an initial nod, the watchdog said.

There was no immediate government statement, but responding on Twitter to Peace Now's tally, Israel's nationalist interior minister, Ayelet Shaked, called it “a festive day for the settlement of Judea and Samaria” — biblical names for the West Bank.

Last week, Shaked announced the plan to approve the new homes, and the Biden administration voiced its “strong” opposition in response.

Asked on Thursday about the housing council's decision, a US Embassy spokesperson referred Reuters to remarks made by the state department after Shaked spoke last week.

“Israel’s programme of expanding settlements deeply damages the prospect for a two-state solution,” the state department said on Friday, referring to a vision of a Palestinian state alongside Israel. Talks on that goal stalled in 2014.

In the West Bank city of Ramallah, Bassam al-Salhe, a member of the executive committee of the Palestine Liberation Organisation, urged Palestinians to “step up their struggle in the face of these settlement projects”.

He also called on the international community “to take deterrent action against Israel to compel it to stop settlement and its aggression against our Palestinian people”.

Most world powers deem Israel's settlements — on land it captured in a 1967 war — as illegal. Israel disputes this, citing security needs and biblical, historical and political connections to the territory.

No date was immediately given for construction of the homes that would expand 22 of Israel's 132 government-backed settlements in the West Bank.

SA concerned about developments in Jerusalem

The SA government on Sunday condemned the increased violence and heightened tensions in Jerusalem, particularly at the Al Aqsa Mosque, and the ...
Politics
3 weeks ago

Israeli forces killed at least two Palestinians on Thursday, the Palestinian health ministry said, in clashes that erupted during a raid in the ...
News
1 month ago

Israel announced on Tuesday that it approved registration as West Bank residents for some 4,000 Palestinians who have been living for years in the ...
News
7 months ago