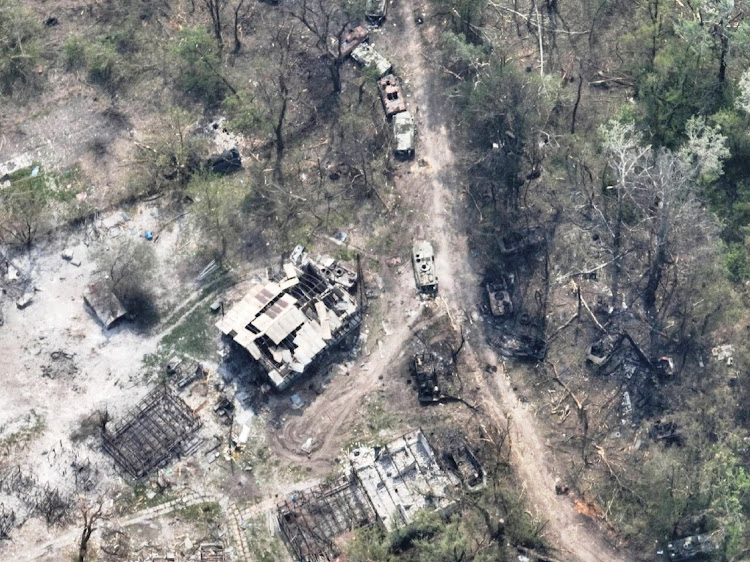 An aerial view of destroyed buildings and burnt vehicles on the banks of Siverskyi Donets River, eastern Ukraine, in this handout image uploaded on May 12, 2022.
Image: Ukrainian Airborne Forces Command/Handout via REUTERS

Four Democratic lawmakers have sent letters to the CEOs of YouTube, TikTok, Twitter and Facebook-owner Meta asking them to archive content that could be used as evidence of Russian war crimes in Ukraine, NBC reported on Thursday.

The letters were signed by the leaders of the House Oversight and Foreign Affairs committees, Carolyn Maloney and Gregory Meeks, and two subcommittee chairman, NBC reported.

International relations and co-operation minister Naledi Pandor has slammed the UN Security Council, saying it has failed the world in the war between Russia and Ukraine.

Delivering her department's budget speech, Pandor tore into the Security Council, saying it had proved that it cannot be relied upon to preserve peace and security.

Russia could cut gas supply to Finland on Friday -newspaper

The paper did not specify where the warning would have come from and Reuters was not able to verify the information.Finland's President Sauli Niinisto and Prime Minister Sanna Marin on Thursday said Finland would apply to join the Western defence alliance NATO "without delay", prompting Russia to vow a response.

On May 5, the Finnish government said it was prepared for the possibility of its eastern neighbour cutting off gas delivery in response to Finland's refusal to abide by Russian demands for gas payments to be made in roubles.

When Pavel fled his home region of Kherson in southern Ukraine he set his sights on reaching Portugal, where his sister-in-law lives — but like increasing numbers of his compatriots escaping the war, he took the long way round.

Too frightened to head west out of the Russian-controlled region and across the conflict's front line, he and his wife and baby daughter skirted it by travelling east into Crimea and then north through Russia, eventually entering the EU via Estonia — a detour of more than 3,000km.

Finland's entry into the NATO would be historic, Pentagon spokesman John Kirby told MSNBC in an television interview on Thursday, adding it would not be difficult to integrate the country into the military alliance.

Ukraine's Kalush Orchestra looks set to ride a wave of public sympathy to win the Eurovision Song Contest when performers take to the stage in the Italian city of Turin on Saturday night.

The bookmakers have made it the clear favourite for the annual contest, which normally draws a television audience of close to 200 million, based on the plight of Ukraine following Russia's invasion in February.

"I would like to see Kalush Orchestra as winners but not because of the war," said Maryna Utkina, who was attending the semi-finals in Turin this week.

"I want to see Kalush Orchestra as winners because of the song, because the song is really beautiful, it's really special," added Utkina, who is from Ukraine but has lived in Italy for three years.

The band takes its name from the Western Ukrainian city of Kalush. It finished second in the country's national song contest but replaced winner Alina Pash after controversy over a visit she made to Crimea in 2015, a year after it was annexed by Russia.

Russia has been excluded from the contest this year.

Italy are hosting after winning last year with Maneskin's rocky "Zitti e Buoni" (Shut Up and Behave).The contest is decided by a combination of votes by the official jury and viewers from participating nations.

Eurovision fans, converging on Turin for an event that combines glitz, energy and a fair dollop of eccentricity, are not put off by the likely influence of politics on the outcome.

For the head of the French OGAE Eurovision fan club, it's part of a long tradition.

"Eurovision has always been political. There's always been a story between Eurovision and geopolitics in terms of votes," Stephane Chiffre said. "But it's also culture, sharing - those are the values of Eurovision which we love."

Finland is expected to announce on Thursday its intention to join NATO with Sweden likely to follow soon after, diplomats and officials said, as Russia's invasion of Ukraine reshapes European security and the Atlantic military alliance.

NATO allies expect Finland and Sweden to be granted membership quickly, five diplomats and officials told Reuters, paving the way for increased troop presence in the Nordic region during the one-year ratification period.

In the wider Nordic region, Norway, Denmark and the three Baltic states are already NATO members, and the addition of Finland and Sweden would likely anger Moscow, which says NATO enlargement is a direct threat to its own security.

British Prime Minister Boris Johnson said on Thursday he did not believe a windfall tax on global energy firms was the right way forward and he wanted to ensure the government did not deter investment by energy companies.

A spike in oil prices due to the war in Ukraine has helped major oil firms book billions of pounds in earnings this year, prompting calls from some politicians for a windfall tax to help families facing cost of living pressures.

“I don't like them. I didn't think they're the right thing. I don’t think they’re the right way forward,” LBC Radio quoted Johnson as saying when asked if he would rule out a windfall tax.

Soft drinks bottler Coca-Cola HBC AG said on Thursday it will evaluate all options for its Russian operations and have a smaller presence in the country, focusing on local brands, after US beverage giant Coca-Cola suspended operations there.

The bottler, which counted Russia as one of its biggest markets, said it was still in the process of implementing the decision by Coca-Cola.

Hundreds of Western companies have either withdrawn or suspended operations in Russia since the country invaded Ukraine in February while Western governments have imposed sanctions.

Ukraine grain exports halve so far in May - farm ministry

Ukraine's grain exports have more than halved so far in May from the same period a year ago, although at just under 300,000 tonnes they are similar to the whole of March, the first full month of Russia's invasion, agriculture ministry data shows.

The country exported up to 6 million tonnes of grain a month before Russia invaded the country in February.

The ministry data showed on Thursday Ukraine has exported 46.17 million tonnes so far in the 2021/22 July-June season, versus 39.65 million a season earlier.

Senior agriculture officials have said Ukraine exported up to 300,000 tonnes of grain in March and 1.09 million tonnes in April.

Ukraine, a major agricultural producer, used to export most of its goods through seaports but has been forced by Russia's invasion to export by train via its western border or via its small Danube River ports.

The Russian military's failure to seize the Ukrainian capital was inevitable because in the preceding years they had never directly faced a powerful enemy, according to a former mercenary with the Kremlin-linked Wagner Group who fought alongside the Russian army.

Marat Gabidullin took part in Wagner Group missions on the Kremlin's behalf in Syria and in a previous conflict in Ukraine, before deciding to go public about his experience inside the secretive private military company.

He quit the Wagner group in 2019, but several months before Russia launched the invasion on Feb. 24 Gabidullin, 55, said he received a call from a recruiter who invited him to go back to fighting as a mercenary in Ukraine.

He rejected the offer, because, he said, he did not agree on principle with the Kremlin's invasion of Ukraine.

The UN Human Rights chief said on Thursday that a thousand bodies had been recovered in the area of the Ukrainian capital Kyiv in recent weeks, adding that many of the violations it is verifying since the Russian invasion may amount to war crimes.

"The scale of unlawful killings, including indicia of summary executions in areas to the north of Kyiv, is shocking," Michelle Bachelet told the Geneva-based Human Rights Council via a video address.

The Human Rights Council will decide on Thursday whether to task investigators with an official probe into the events that occurred in Kyiv and other regions in February and March.

Russia denies targeting civilians and calls its actions in Ukraine since Feb. 24 a "special military operation" to disarm the country and rid it of what the Kremlin calls anti-Russian nationalism fomented by the West. Ukraine and the West say Russia launched an unprovoked war of aggression.

Requests via the Velke Kapusany border point were around 512,056 megawatt hours (MWh) per day, down from 856,922 MWh per day earlier on Thursday, the data showed.

Ukraine keeps up counterattack to north of Kharkiv, Britain says

Ukrainian forces are keeping up a counterattack to the north of the second largest city of Kharkiv and recapturing several towns and villages toward the Russian border, Britain said on Thursday.

Russia has reportedly withdrawn units from the area and the forces are likely to redeploy after replenishing the losses to the eastern bank of the Siverskyi Donets river, the British defence ministry said in a regular Twitter bulletin.

On Wednesday, Ukraine said it had pushed back Russian forces in the east to recapture Pytomnyk, a village on the main highway north of Kharkiv, about halfway to the Russian border.

Four days after his return from the International Space Station, German astronaut Matthias Maurer described how he and the rest of the crew dealt with the news of Russia's invasion of Ukraine.

Inside the hospital on Ukraine's frontline

This hospital in the small Ukrainian town of Bakhmut receives queues of ambulances and treats those wounded in the conflict with Russia.

The consequences of the war in Ukraine will still be felt in 100 years, German Chancellor Olaf Scholz said.