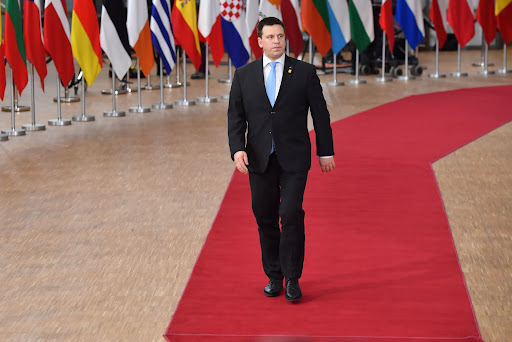 Estonian prime minister Kaja Kallas, a Baltic leader who has been an outspoken antagonist of Vladimir Putin, narrowly avoided a government collapse after she challenged her coalition partner Yuri Ratas to call a confidence vote.
Image: Bloomberg

Estonian prime minister Kaja Kallas, a Baltic leader who has been an outspoken antagonist of Vladimir Putin, narrowly avoided a government collapse after she challenged her coalition partner to call a confidence vote.

Juri Ratas, a former premier who leads the junior partner in Kallas’s alliance, had introduced a 300m euros (about R4.99bn) family benefits package without the consent of Kallas’s Reform Party. The prime minister accused Ratas of issuing an “ultimatum” and demanded he put the matter to a parliamentary vote that could bring down the government.

“Be a man about it, hold a vote of no confidence against me,” Kallas told reporters in Tallinn on Thursday, accusing Ratas and his Centre Party of trying to manoeuvre its way into a new coalition.

Ratas, who led a previous government with a far-right coalition partner, effectively backed down, telling public broadcaster ERR that he wouldn’t seek to topple the government.

But the spat left the governing coalition in the Baltic nation of 1.3-million teetering.

Kallas, 44, has moulded herself as a leader tough on defense issues since taking office in January 2021, a reputation that’s helped her popularity soar since Russia invaded Ukraine. Putin has “gone all in”, Kallas told Bloomberg Television in an interview in March.

“He either wins, or he loses,” she said. “So it’s up to everybody to make sure that Putin doesn’t win this war.”

The spat was a new low for Kallas’s coalition, which has been buffeted by infighting. The alliance’s status remains uncertain, Ratas indicated, saying that Kallas had “appeared” to call off the coalition with her comments. A spokesperson for Kallas’s Reform Party said the coalition still stands.

Polls show Ratas’s party wouldn’t fare well if a new election were held. While support for the parties had been even as recently as February, Kallas’s Reform Party on Wednesday stood at 33%, with the centre Party behind at 17%, according to pollster Norstat.