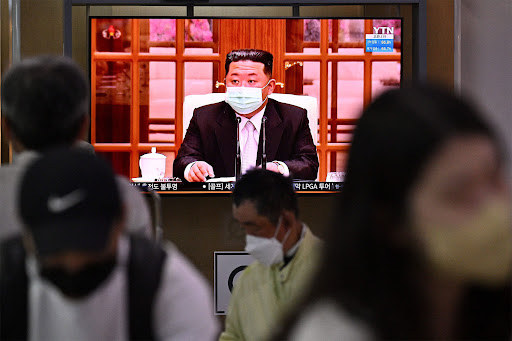 “After more than two years of flat-out denying that there were any Covid cases in the country -- with no vaccines, no outside help, and an already poor public health system -- Kim can’t suppress reality any longer”
Image: Bloomberg

North Korea revealed Friday a widespread outbreak of a fever that spread “explosively” across the country since the end of April, resulting in 350,000 cases and six deaths — including one that tested positive for Covid-19.

The news came a day after the state for the first time said it had a Covid-19 case within its borders, which prompted leader Kim Jong Un to order a lockdown of major cities and call for stringent measures to stop the virus. On Thursday alone, North Korea had 18,000 new cases of fever and as many as 187,800 people are being isolated and treated, the official Korean Central News Agency said.

North Korea, which has shunned Covid-19 vaccines, didn’t explicitly say the new infections were from the coronavirus, but the public health crisis has dominated its state-controlled media over the past day. While experts long doubted that North Korea managed to keep out the pandemic that has swept the world since early 2020, Kim’s move this week to publicly acknowledge the outbreak suggests cases are too widespread for authorities to control.

“It’s possible that Kim can no longer act as if Covid-19 does not exist in the country,” said  Soo Kim, a policy analyst with the Rand Corp. who previously worked at the Central Intelligence Agency.

“After more than two years of flat-out denying that there were any Covid-19 cases in the country — with no vaccines, no outside help, and an already poor public health system — Kim can’t suppress reality any longer,” she said.

During his visit to the state facility, Kim Jong Un reiterated the importance of putting all cities under lockdown. “It is the top priority to block the virus spread by actively locking down areas and isolating and treating persons with fever in a responsible manner,” Kim Jong Un said according to KCNA, vowing his party would “victoriously lead the epidemic-prevention war.”

“It is the most important challenge and supreme tasks facing our party to reverse the immediate public health crisis situation at an early date, restore the stability of epidemic prevention and protect the health and wellbeing of our people,” leader Kim said at the state’s emergency epidemic prevention headquarters.

Until Thursday, Kim’s regime had denied it had any Covid-19 cases, a claim doubted by experts in the US, Japan and other countries. It has also refused vaccines from the outside world, with reports saying planned shipments have been put on hold because North Korea was unwilling to follow rules by Covax, a body backed by the World Health Organisation.

Shortly after letting the public know of Covid-19 within its border, North Korea put on a display of its military might, firing three, short-range ballistic missiles into waters off its east coast.

In August 2020, North Korea said it was pushing ahead with the development of a vaccine against the virus, but has given scant mention of vaccines since then. Any Covid-19 outbreak in North Korea, if widespread, could potentially be devastating given the country has an antiquated healthcare system and likely no vaccines. A recent United Nations report said North Korea and Eritrea are the only two countries in the world that have not administered vaccines.

The administration of new South Korean Presidential Yoon Suk Yeol, who has pledged to take a tough line on Pyongyang for its security threats, said it was open to providing humanitarian assistance and vaccines to its neighbour.

Still, North Korea should be able to keep the public in order. It maintains one of the most repressive systems on the planet, with a slew of political prisons for those who fall out of line or dare to question the legitimacy of its leaders. The regime was able to weather a famine in the 1990s that some estimates said killed as many as 3.5 million people over a number of years.

The North Korean leader’s decision to fire off missiles hours after saying Covid-19 had entered the state gives an indication of his priorities, Soo Kim said.

“The admission of Covid-19 cases is probably motivated less by his concerns for the population’s health than a need to skirt blame and responsibility for poor state management,” she said.