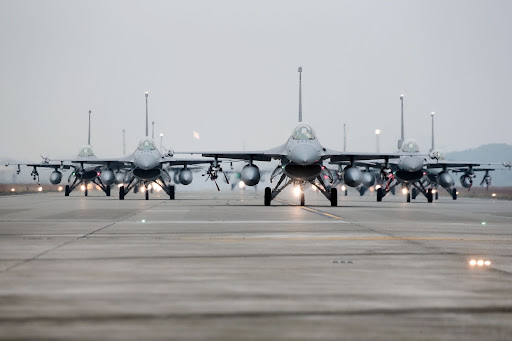 After a period of frosty relations, a meeting between President Joe Biden and Erdogan in Rome in October saw a shift in tone, and last month the two administrations launched a “strategic mechanism” to enhance economic and defense cooperation.
Image: Bloomberg

The Biden administration has asked Congress to approve the sale of weapons and equipment upgrades to Turkey’s fleet of American-made F-16 fighter jets, a sign of thawing relations between the NATO allies as the Russian war in Ukraine drags on.

The informal reviews submitted to Congress include the proposed sale of Sidewinder missiles, Amraam missiles and software and hardware updates to F-16 cockpits already in Turkey, according to people familiar with the matter. Turkey’s arms purchase is expected to exceed $500 million, according to one of the people, who asked not to be identified in advance of a formal announcement.

A State Department spokesperson said in an email that the US values its relationship with Turkey and that its continued ability to operate in conjunction with other NATO members remains a priority. The proposed sale was reported earlier by the Wall Street Journal.

After a period of frosty relations, a meeting between President Joe Biden and Erdogan in Rome in October saw a shift in tone, and last month the two administrations launched a “strategic mechanism” to enhance economic and defence co-operation.

Now, Turkey has asked the US government for permission to buy new F-16 fighters, also built by Lockheed, as well as upgrading those it already has, a request still under consideration.

Turkey has sought a middle ground towards the war in Ukraine. The government in Ankara has been reluctant to burn its bridges with Russian President Vladimir Putin — in part fearing a rupture would put Turkish forces deployed in Syria at risk of attack by Russian-backed Syrian government troops. But it has supplied Kyiv with lethal Turkish-made armed drones and shut its straits and air space to Russian military ships and aircraft.