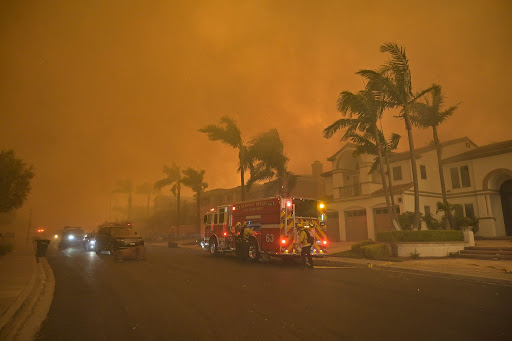 The fire has consumed at least 195 acres in Laguna Niguel, about 55 miles (89 kilometers) southeast of Los Angeles, the Orange County Fire Authority said in a tweet.
Image: Bloomberg

A wind-driven wildfire destroyed at least 20 homes in a wealthy town in California’s Orange County, laying bare how a historic drought has left the region under constant threat of blazes.

The fire has consumed at least 195 acres in Laguna Niguel, about 55 miles (89 kilometres) southeast of Los Angeles, the Orange County Fire Authority said in a tweet. Evacuations remain in place in certain areas, Lisa Bartlett, an Orange County supervisor said during a press conference Thursday. About 900 homes remain under evacuation orders.

“What we saw today is not something we’re used to seeing this time of year or even during these types of conditions,” Orange County Fire Authority Chief Brian Fennessy said Wednesday.

The cause of the fire is under investigation, county officials said Thursday. Edison International’s Southern California Edison said it had detected “circuit activity” on one of its power lines on Wednesday afternoon near the start of the Coastal Fire, according to a report filed with state utility regulators. Edison was down as much as 4.1% on Thursday.

Southern California Edison spokesperson Reggie Kumar said the company submitted its report to the California Public Utilities Commission so the commission can conduct its own investigation. The California PUC didn’t immediately return a request for comment.

The blaze, called the Coastal Fire, started near a water treatment plant Wednesday and then quickly moved upslope, pushed on by high winds, Fennessy said. The initial 911 emergency call came in at 2:44pm local time and the caller said the fire was still only about 50 feet by 50 feet.

One firefighter was injured Wednesday and was taken to a hospital for further evaluation, a county fire official said Thursday. The Orange County Fire Authority doesn’t yet know how much of the fire has been contained.

Gale warnings are up just off the California coast through Friday as winds are expected to reach about 35 miles per hour, the National Weather Service said. Onshore, a wind advisory is in place across towns north of Los Angeles. In the area around the fire, winds could reach about 25mph under sunny and dry conditions, the weather service said.

The blaze is one of three currently burning across California, according to the state Department of Forestry and Fire Protection, commonly known as Cal Fire. The two others are the House Fire near Fresno and the Moonlight RX fire in the Plumas National Forest in Northern California. So far this year, 1,561 fires have scorched 6,718 acres (2,719 hectares).