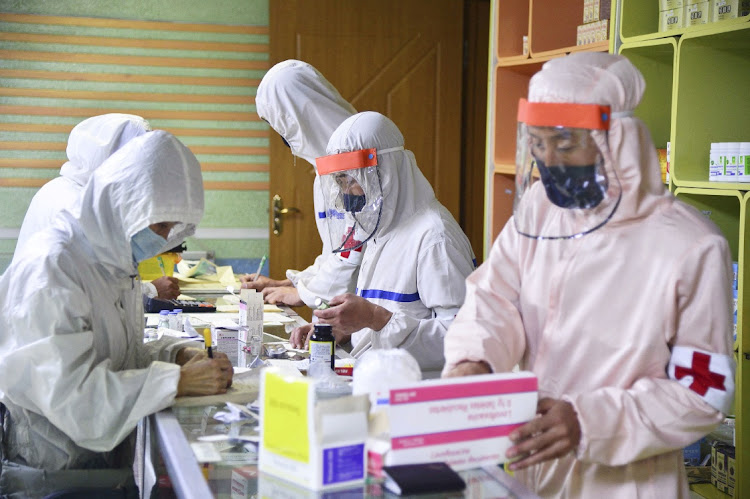 Members of the North Korean army supply medicines to residents at a pharmacy, amid growing fears over the spread of the coronavirus disease (Covid-19), in Pyongyang, North Korea, in this photo released by Kyodo on May 18, 2022.
Image: Mandatory credit Kyodo/via REUTERS

North Korea is ramping up production of drugs and medical supplies including sterilises and thermometers as it battles an unprecedented coronavirus outbreak, state media KCNA said on Thursday.

The isolated country, which has imposed a nationwide lockdown, is also increasing production of traditional Korean medicines used to reduce fever and pain, KCNA said, calling them “effective in prevention and cure of the malicious disease.”

A sweeping Covid-19 wave, which North Korea first confirmed last week, has fanned concerns over a lack of medical resources and vaccines, with the UN human rights agency warning of “devastating” consequences for its 25 million people.

The outbreak spread after Pyongyang held a massive military parade on April 25 and was expected to peak between late May and early June, South Korea's Newsis news agency said on Wednesday, citing lawmakers briefed by Seoul's spy agency.

KCNA had said only that a wave of fever of unidentified origin began in late April.

At least 262,270 more people reported fever symptoms, and one additional person died as of Wednesday evening, KCNA said, citing data from the state emergency epidemic prevention headquarters. It did not specify how many people had tested positive for the virus.

Factories are churning out more injections, medicines, thermometers and other medical supplies in the capital Pyongyang and nearby regions “in a lightning way,” while more isolation wards were installed and disinfection work intensified around the country, KCNA said.

The reports came after North Korean leader Kim Jong Un criticised ineffective distribution of drugs and slammed officials for their “immature” responses to the epidemic.

Without a national vaccination campaign and Covid-19 treatment, state media have encouraged patients to use painkillers and antibiotics as well as unverified home remedies, such as gargling salt water, or drinking lonicera japonica tea or willow leaf tea.

North Korea's state television recommended wearing two masks outdoors, a practice Kim followed on a weekend pharmacy visit, though not in TV images of a politburo meeting of the ruling Workers' Party on Tuesday.

Dale Fisher, a professor of medicine at National University of Singapore, said the crisis might be underestimated because of the absence of testing and the more asymptomatic Omicron variant, and could cause greater social and economic fallout in an unvaccinated community.

“The best health systems in the world struggled in most countries, so I think it's likely that the true health impact is not being accurately described,” Fisher said.

“An urgent vaccine rollout is imperative, and significant public health measures and social interventions should be introduced in the meantime to slow the spread,” he added.

South Korea and the US have respectively offered to help North Korea fight the virus, including sending aid, but have not received a response, Seoul's deputy national security advisor said on Wednesday.

However, three aircraft from North Korea's Air Koryo arrived in China and returned to Pyongyang on Monday carrying medical supplies, a diplomatic source said on condition of anonymity.