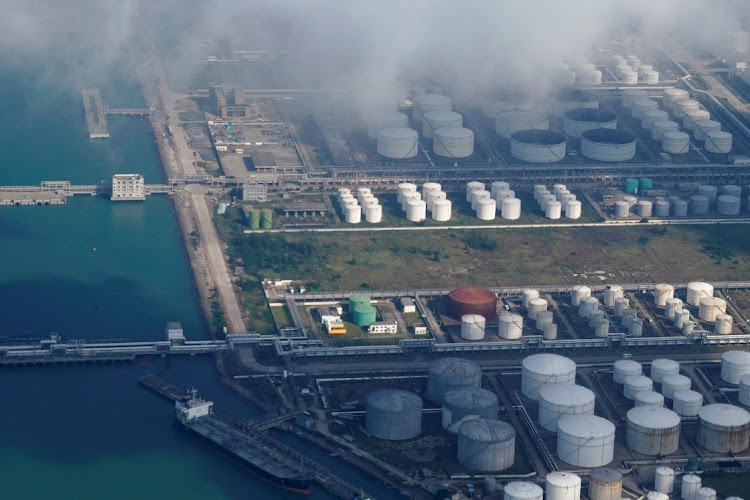 Oil and gas tanks are seen at an oil warehouse at a port in Zhuhai, China.
Image: REUTERS/Aly Song/File Photo

Iran's crude exports to China have fallen sharply since the start of the Ukraine war as Beijing favoured heavily discounted Russian barrels, leaving almost 40 million barrels of Iranian oil stored on tankers at sea in Asia and seeking buyers.

US and European sanctions imposed over Moscow's invasion of Ukraine on Feb. 24 have pushed more Russian crude east, where China has snapped it up, cutting demand for oil from Iran and Venezuela, which are also both under Western sanctions.

About 20 vessels with oil from Iran were at anchor near Singapore as of mid-May, shippers' data showed.

Some tankers have been anchored since February but the number storing Iranian oil climbed swiftly since April, trading and shipping sources said, as more Russian oil headed east.

The US banned imports of Russian oil shortly after Moscow's invasion, while the European Union is considering a phased embargo, pushing more Russian oil cargoes towards Asia.

“Russia can switch almost half of its exports to Southeast Asia, especially China ... and that is a huge potential threat for Iranian crude exports,” Hamid Hosseini, board member of Iran's Oil, Gas and Petrochemical Products Exporters' Union in Tehran, told Reuters.

Iran, whose oil industry has struggled for years under US sanctions imposed over Tehran's nuclear work, has long relied on Chinese oil purchases to keep the economy afloat.

Iran's exports to China were estimated at 700,000 to 900,000 barrels per day (bpd) in March, according to data and consultancy firm calculations.

But in April those exports were estimated to have dropped by between 200,000 and 250,000 bpd, according to Iman Nasseri, MD for the Middle East with FGE consultancy, suggesting a drop of roughly a quarter or a third.

Kpler said Iran had on average exported 930,000 bpd, mainly to China in the first quarter, while its preliminary estimate for April was 755,000 bpd, although it said that estimate could be revised because of the difficulty of tracking Iranian sales.

“China is now clearly buying more (Russian) Urals cargoes. Exports of Urals to China have more than tripled. That comes despite a weakening in Chinese imports,” said Homayoun Falakshahi, a senior analyst at Kpler.

China, where total oil imports have fallen recently because of Covid-19 restrictions, is also the largest buyer of Russian ESPO Blend crude.

Iran and Russia have been in close contact in recent weeks to discuss how to trade oil under sanctions, three sources told Reuters. One source said the Russian side wanted to learn how Iran had navigated transport, trade and banking, while the two sides also discussed creating joint companies, banks and funds.

Another of the sources said more talks were planned when Russian Deputy Prime Minister Alexander Novak visits Iran next week.

But the talks have not eased the competition to find buyers for Russian Urals and Iranian crudes, which are usually heavier with higher sulphur content, tending to make them more expensive to process than Russian oil.

“Nobody's looking at Iranian crude any more as Russian grades are of much better quality and at lower prices. Iranian oil sellers are under severe pressure,” said a trader with a Chinese refiner.

“You can legally buy Russian oil at discount, but Iranian oil continues to be the subject of sanctions, so naturally people go for the easier option,” a European trader said, referring to the tighter US sanctions on Iran's exports.

Russian oil and refined products are also flowing into other markets, especially India and the United Arab Emirates (UAE).

Russian fuel oil arrivals in the UAE storage hub of Fujairah are set to climb to about 2.5 million barrels in May, about 125% higher than April levels.

India, meanwhile, has increased purchases of Russian crude. By early June, India will have imported more than 30 million barrels in the past three months, according to Kpler, more than double the volume imported in the whole of 2021.