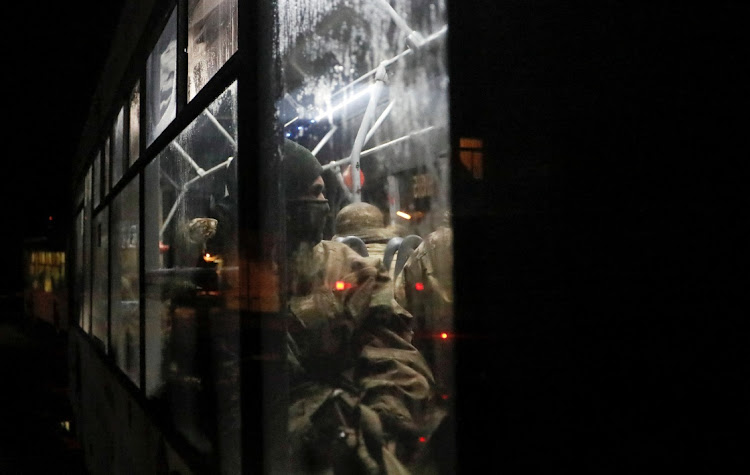 A view shows buses carrying service members of the Ukrainian armed forces, who surrendered at the besieged Azovstal steel mill in Mariupol in the course of Ukraine-Russia conflict and arrived under escort of the pro-Russian military in the settlement of Olenivka in the Donetsk region, Ukraine May 20, 2022.
Image: REUTERS/Alexander Ermochenko

The region, home to the Russian Baltic Fleet and a deployment location for Russian nuclear-capable Iskander missiles, is sandwiched between NATO members Lithuania and Poland.

Putin launched an LNG import ship in Kaliningrad in January 2019, hailing it as energy security for the exclave against gas pipeline disruptions.

The U.S. is spanning a sea bridge over the Atlantic to support Ukraine with crucial equipment in its war against Russia, a senior official said on Friday, as a huge cargo ship at the Belgian port of Antwerp got ready to set sail for Germany.

Carol Petsonk, the United States' Assistant Secretary for Aviation and International Affairs, was shown around the loading dock of the vehicles carrier "Arc Integrity" where the military gear was tied with straps to the floor.

"What we see is the vessel's carrying two types of equipment: One is the personal vehicles, belongings of service members who are going to serve in U.S. forces in Europe," Petsonk told reporters.

"The other is military equipment, including defensive capability equipment, medical vehicles for providing medical supplies to injured."

Vehicles, medical supplies and temporary bridges would be offloaded at the German North Sea port of Bremerhaven and then transported over land to Ukraine, Petsonk said.

"Ukraine desperately needs medical supplies and capability to move those supplies into the country to the points where they are needed, and that's what these vehicles will provide."

The commander of Ukraine's Azov Regiment said in a video published on Friday that civilians and heavily wounded fighters had been evacuated from Mariupol's Azovstal steelworks, giving no further clue about the fate of the rest of its defenders.

"We have constantly emphasised the three most important conditions for us: civilians, wounded and dead," Lieutenant Colonel Denys Prokopenko, the commander, said in the video shared on the Telegram messaging app.

"The civilians have been evacuated. The heavily wounded received the necessary assistance and they were evacuated, to be later exchanged and delivered to territory controlled by Ukraine," Prokopenko said.

Ukraine ordered its garrison in Mariupol to stand down on Monday but has since given few details of what it describes as an effort to rescue fighters from Azovstal, the last bastion of Ukrainian resistance the ruined port.

Ukrainian officials have not confirmed that number and Reuters has not been able to verify it.Britain said on Friday around 1,700 fighters had surrendered and an unknown number remained inside.

A full abandonment of the bunkers and tunnels of the bombed-out plant would end the most destructive siege of a war that began when Russia invaded Ukraine on Feb. 24.Prokopenko said the process of removing the dead from Azovstal was still under way.

"I hope that in the near future, relatives and Ukraine will be able to bury their soldiers with honour," he said.

Russia needs Mariupol, one of Ukraine's main seaports, to cement its control of land it has seized along the coast, reaching all the way west to annexed Crimea.

The city is now an urban wasteland shattered by artillery and street-by-street fighting.

Ukrainian President Volodymyr Zelenskiy says Mariupol's last defenders - regular soldiers as well as members of the National Guard, to which the Azov Regiment belongs - are national heroes, and that he hopes they can be exchanged for Russian prisoners.

Moscow calls the Azov Regiment "Nazis". The unit, formed in 2014 as a militia to fight Russian-backed separatists, denies being fascist, and Ukraine says it has been reformed from its radical nationalist origins.

The Kremlin has said the Azovstal defenders would be treated in line with international norms. Some Russian lawmakers have demanded they be tried for war crimes and one said they should face the death penalty.

The International Committee of the Red Cross says it has been given access to register hundreds of prisoners from the plant, but has not specified how many there are.

The U.S. Embassy in Moscow said on Friday that it was surprised but not offended by a proposal to name a nearby intersection "Defenders of Donbas Square", suggesting disingenuously that it was to honour Ukrainian soldiers fighting Russian aggression.

The Moscow city assembly said on Wednesday that its members were considering naming the intersection after soldiers fighting against alleged "Nazism" in the largely Russian-speaking Donbas region of eastern Ukraine.

Russia says one of the reasons why it sent its armed forces into Ukraine on Feb. 24 was to protect its Russian-speakers from "Nazi" or "fascist" persecution.

Kyiv and the West say the allegation of fascism is a baseless pretext for an unprovoked act of aggression, and the United States has led Western allies in supporting Ukraine with money and heavy weaponry as well as sanctions against Russia.

"Surprised but not offended by the Russian government's proposal to rename a part of downtown Moscow near the US. Embassy 'Defenders of Donbas Square', presumably in honour of Ukrainian soldiers bravely defending their homeland from Kremlin aggression," the embassy said. "The country should know its heroes."

A 21-year-old Russian soldier told a court on Friday he had not wanted to kill an unarmed civilian and that he sincerely repented, as he delivered his final words at the first war crimes trial arising from Russia's February 24 invasion.

Vadim Shishimarin, a tank commander, has pleaded guilty to killing Oleksandr Shelipov, a 62-year-old civilian, in the northeast Ukrainian village of Chupakhivka on Feb. 28.

“I sincerely repent. I was nervous at the time, I did not want to kill... that's how it happened,” Shishimarin said.

Flows of Russian gas to neighbouring Finland will stop on Saturday morning, Finnish state-owned gas wholesaler Gasum said in a statement on Friday.

The European Union has disbursed 600 million euros ($634.98 million) to Ukraine as part of a macro financial assistance program, Denis Shmyhal, the Prime Minister, said on Friday.

"Today, #EU disbursed a new tranche of €600 million under the emergency Macro-Financial Assistance Program to #Ukraine," Shmyhal wrote on his Twitter account.

Shmyhal also said he was grateful to the European Commission and its President Ursula von der Leyen. "We will win and rebuild Ukraine together," he said.

EU leaders to agree to set up Ukraine reconstruction fund, vague on detail

European Union leaders will agree on May 30 to set up a fund for the reconstruction of Ukraine once the war with Russia ends, but will remain vague on how it would be financed, draft conclusions of the summit, seen by Reuters, showed on Friday.

The European Commission proposed on Wednesday to set up a "RebuildUkraine" facility of grants and loans of unspecified size, modelled on the EU's existing recovery fund for which the bloc jointly borrowed on the market.

"A Ukraine reconstruction platform should be set up, bringing together the Ukrainian government, Member States, the European Union as well as partners, financing institutions and organisations," the draft leaders' conclusions said.

Economists' estimates of the cost of rebuilding Ukraine vary widely between 500 billion euros and 2 trillion euros ($524 billion to $2.1 trillion), depending on the assumptions on the length of the conflict and the scope of destruction.

With sums of such magnitude, the EU is also considering seizing frozen Russian assets in the EU as sources of financing and EU leaders will be supportive, the draft showed.

"The European Council welcomes the efforts made with a view to providing for appropriate confiscation measures, including exploring options aimed at using frozen Russian assets to support Ukraine’s reconstruction," the draft said."

In this context, it calls on the Council (of ministers) to act swiftly on the recent Commission’s proposal on criminal law measures in case of violation of EU sanctions," it said, though the sentence is in brackets, meaning it could still be changed.

Ukraine's industrial Donbas region, the focus of recent Russian offensives, has been destroyed, President Volodymyr Zelenskiy said as some of the world's richest countries pledged to bolster Kyiv with billions of dollars.

Since turning away from Ukraine's capital, Russia is using massed artillery and armour to try to capture more territory in the Donbas, comprises the Donetsk and Luhansk areas, which Moscow claims on behalf of separatists.

“The occupiers are trying to exert even more pressure. It is hell there — and that is not an exaggeration,” Zelenskiy said in a late Thursday address.

"(There are) constant strikes on the Odesa region, on the cities of central Ukraine. The Donbas is completely destroyed,” he said.

Moscow calls its invasion a “special military operation” to rid Ukraine of fascists, an assertion Kyiv and its Western allies say is a baseless pretext for an unprovoked war.

Iran's crude exports to China have fallen sharply since the start of the Ukraine war as Beijing favoured heavily discounted Russian barrels, leaving almost 40 million barrels of Iranian oil stored on tankers at sea in Asia and seeking buyers.

US and European sanctions imposed over Moscow's invasion of Ukraine on Feb. 24 have pushed more Russian crude east, where China has snapped it up, cutting demand for oil from Iran and Venezuela, which are also both under Western sanctions.

About 20 vessels with oil from Iran were at anchor near Singapore as of mid-May, shippers' data showed.

US President Joe Biden welcomed congressional passage of $40 billion in aid for Ukraine and announced a new package of weapons he said would be sent “directly to the front lines.”

A top Kremlin official said Russia is intent on taking all of the Donetsk and Luhansk regions of Ukraine. The US and United Nations are looking at ways to help Ukraine ship its grain by rail to a port in Lithuania, the Wall Street Journal reported, in the face of a global grain crunch caused by the war.

Russia is likely to reinforce its operations in the industrial Donbas region once they secure the city of Mariupol, British military intelligence said early on Friday.

As many as 1,700 soldiers are likely to have surrendered at the Azovstal steel factory in Mariupol, the report added.

Moscow also said on Thursday that 1,730 Ukrainian fighters had surrendered from the steel factory so far, including 771 in the past 24 hours. Ukrainian officials, who have sought a prisoner swap, had declined to comment, saying it could endanger rescue efforts.

Russian shelling in Ukraine's eastern region of Luhansk has killed 13 civilians over the past 24 hours, the regional governor, Serhiy Gaidai, said on Friday.

Twelve were killed in the town of Sievierodonesk, where a Russian assault has been unsuccessful, he said. The town and the city of Lysychansk are in an area where Russian troops have launched an offensive.

Sky News' Alex Crawford joins Shep Smith to report the latest from Ukraine, including a medic who documented the horrors of Mariupol and Russian attacks in the Donbas region.