Talk to Ukraine about ports, not us, says Russia ahead of UN talks in Moscow 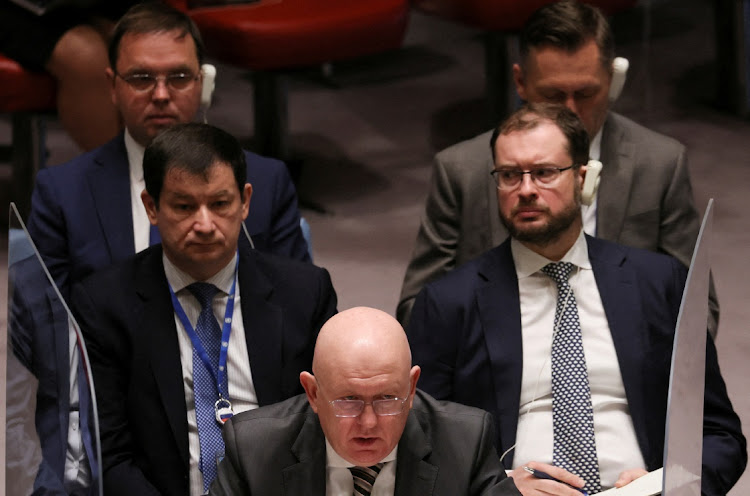 Russian Ambassador to the United Nations Vassily Nebenzia reads a statement as he sits with other Russian diplomats during a meeting of the United Nations Security Council to discuss the Russian invasion of Ukraine at UN. headquarters in New York, US, May 12, 2022.
Image: REUTERS/Mike Segar/File Photo

A senior UN official is due to visit Moscow in the coming days to discuss reviving fertiliser exports, Russia's UN Ambassador Vassily Nebenzia said on Wednesday, stressing that the talks were not linked to a resumption of Ukrainian grain shipments.

Since Russia invaded Ukraine on Feb. 24, Ukrainian grain shipments from its Black Sea ports have stalled and more than 20 million tonnes of grain are stuck in silos, while Moscow says the chilling effect of Western sanctions imposed on Russia over the war have disrupted its fertiliser and grain exports.

The conflict is fuelling a global food crisis with prices for grains, cooking oils, fuel and fertiliser soaring. Russia and Ukraine account for nearly a third of global wheat supplies, while Russia is also a key global fertiliser exporter and Ukraine is a major exporter of corn and sunflower oil.

Nebenzia said that “formally fertilisers and grain are not under sanctions, but there are logistical, transport, insurance, bank transfer problems” created by Western sanctions that “prevent us from exporting freely”.

“We are prepared to export fertilisers and grain from our ports to the world market,” he said, adding that when it came to Ukrainian grain exports — “I think that should be negotiated with the Ukrainians, not with Russians.”

However, Western officials say any deal on access to Ukrainian ports would need Russian agreement, citing what they say is a Russian blockade and a need for security guarantees.

UN Secretary-General Antonio Guterres, who visited Moscow and Kyiv last month, is in “intense contact” with Russia, Ukraine, Turkey, the US and the European Union in a bid to broker what he calls a “package deal” to resume both Ukrainian food exports and Russian food and fertiliser exports.

“Turkey is ready to contribute to a kind of monitoring of these exports from Odesa through the Black Sea because Turkey traditionally is very strong in the Black Sea and they are ready to help,” said a senior European diplomat, speaking on condition of anonymity.

Nebenzia said that top UN trade and development official Rebecca Grynspan was due to discuss Russian exports during a visit to Moscow in the coming days. She is coordinator of the UN Global Crisis Response Group on Food, Energy and Finance that aims to combat global economic shocks from the Ukraine war.

Nebenzia also said he believed UN aid chief Martin Griffiths was due to visit Moscow sometime in early June, but that he did not know “to what extent” Griffiths was involved in the discussions on grain and fertiliser exports.

The US and others accuse Russia of blockading Ukraine's ports. Nebenzia has said there is an 80 nautical mile (148km) long and 3 nautical mile (5.5km) wide “safe corridor” allowing access to the major Ukrainian Black Sea port of Odesa, but that Ukraine needs to remove mines from the waters.

“They mined the ports, not us,” Nebenzia said on Wednesday. “There is a corridor which exists, which they don't use.”

Ukrainian Foreign Minister Dmytro Kuleba poured scorn on the suggestion that Moscow wanted to allow Ukraine to ship grain, telling the World Economic Forum in Davos: “You could not find a better example of a blackmail in international relations.”

Odesa is Ukraine's main deepwater port and used to handle almost all its grain exports. It has suffered a number of Russian missile attacks, and Kyiv fears that Moscow wants to capture it, potentially through an amphibious assault.

Russia's defence ministry said the port of Mariupol, the Ukrainian city on the shallow-water Azov Sea which was taken by Russia after a long siege, was operating normally after Russian forces finished removing mines.