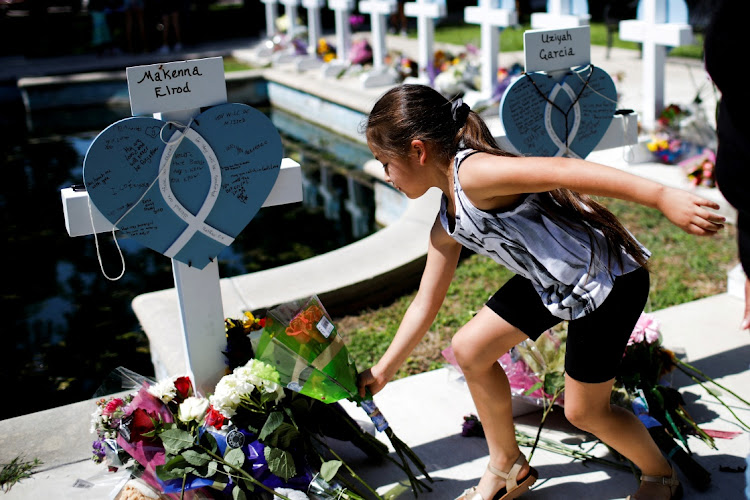 A girl leaves flowers at a memorial in Town Square in front of the county courthouse, two days after a gunman killed nineteen children and two adults, in Uvalde, Texas, US May 26, 2022.
Image: REUTERS/Marco Bello

A trauma doctor tending to three children wounded in the school shooting in the Texas City of Uvalde said it is “crushing” to treat victims of the second mass shooting in the area within the last five years.

“It's a little bit crushing that, you know, you're talking about a trauma centre that's had two events in the last five years,” Dr. Lillian Liao, the paediatric trauma medical director at University Hospital in San Antonio, told Reuters in a Zoom interview on Thursday.

Liao, who is a mother of two children herself, said she is treating one nine-year-old and two 10-year-olds wounded in the Uvalde shooting at the trauma centre. She said one child is in serious but stable condition, and the other two are in stable condition. It could be days or up to a month until they are able to leave the hospital.

On November 5, 2017, a man who was thrown out of the U.S. Air Force for beating his wife and stepson shot 26 people dead at a church in Sutherland Springs, about 30 miles (50km) east of San Antonio, before killing himself. Uvalde is about 80 miles west of San Antonio.

“Unfortunately or fortunately ... it's really challenging because we had the experience of Sutherland Springs in 2017,” Liao said.

Since the pandemic began in 2020, Liao said she has seen an uptick in firearm-related injuries, not just from gun violence, but from accidents which could be avoided by safely storing weapons and having a gun lock.

She said about 10% of the injuries she sees each year are firearm-related and that number has steadily increased over the last couple of years.

In the deadliest school shooting in nearly a decade, Salvador Ramos, 18, shot his grandmother on Tuesday and then crashed his car while fleeing near Robb Elementary School in Uvalde.

He made his way into the school and fatally shot at least 21 people before police apparently shot and killed him. At least 17 people, including children and the gunman's grandmother, were wounded.

The human toll of the rampage deepened with news that the husband of one of the slain teachers died of a heart attack on Thursday while preparing for his wife's funeral.

Pope Francis on Wednesday said he was “heartbroken” by the shooting at a school in Texas that killed at least 19 children and two teachers, calling ...
News
1 month ago

The Texas gunman who murdered 19 children and two teachers posted on Facebook that he was going to shoot up an elementary school about 15 minutes ...
News
1 month ago

‘We can, must do better’: Matthew McConaughey leads celeb reactions to Texas shooting

American actor Matthew McConaughey has urged Americans to "rearrange our values" and find "common ground" following a mass shooting at a Texas, US, ...
Lifestyle
1 month ago

WATCH | 'What are we doing?' US senator pleads for action after Texas shooting claims 21

"Spare me the bullshit about mental illness," Murphy said, anticipating that response to Tuesday's massacre, which killed two teachers and 19 ...
News
1 month ago