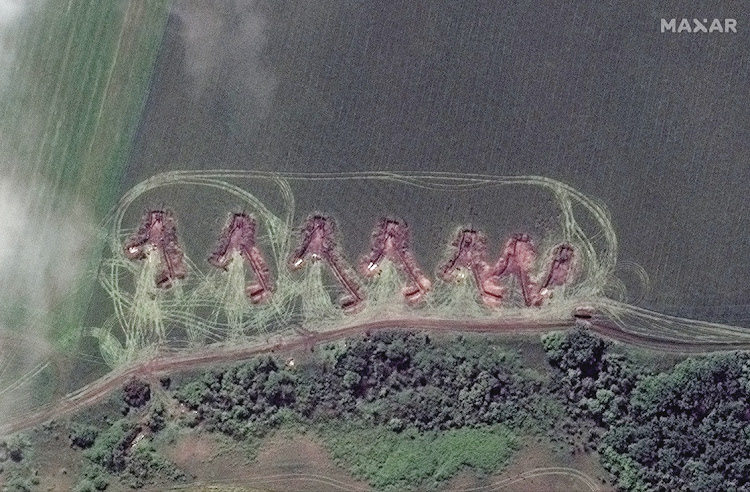 Russia said this month that almost 2,000 Ukrainians had surrendered after making a last stand in the ruins of Mariupol, where they had held out for weeks in bunkers and tunnels beneath the vast Azovstal steelworks.

Macron and Scholz also insisted on the urgency of lifting the Russian blockade of the port of Odesa to allow Ukrainian grain exports, the palace said.

The Kremlin said Putin told Macron and Scholz in the call that Russia was willing to discuss ways to make it possible for Ukraine to resume shipments of grain from Black Sea ports.

Russia invaded Ukraine on February 24 in what it called a "special operation" to demilitarise and "denazify" its southern neighbour. Ukraine and Western nations have dismissed this as a baseless pretext for war.

Former Ukrainian President Petro Poroshenko was prevented from leaving Ukraine to take part in a meeting of a NATO body in Lithuania, his party's parliamentary faction said on Saturday.

Poroshenko was stopped twice at a border crossing with Poland while he was on his way to the meeting of NATO's Parliamentary Assembly, a consultative interparliamentary organisation, the statement said.

Ukrainian media reported Poroshenko could not cross the border due to "technical problems" with a permit allowing him to leave the country.

"Poroshenko had received all the formal permissions to leave the country and had been included ... in the official delegation of the Parliament of Ukraine for this event," his European Solidarity parliamentary faction said.

Poroshenko was to have a number of high-level meetings in Vilnius, including with the President of Lithuania Gitanas Nauseda.

He was also scheduled to participate in a meeting of the European People's Party in Rotterdam, it said.

In January, Poroshenko won a court ruling allowing him to remain at liberty while being investigated for treason in a probe he says was a politically motivated attack linked to allies of his successor, President Volodymyr Zelenskiy.

Poroshenko is being investigated in connection with the financing of Russian-backed separatists in the east of the country through illegal coal sales in 2014-15.

Russian President Vladimir Putin told the leaders of France and Germany in a phone call on Saturday that Russia was willing to discuss ways to make it possible for Ukraine to export grain from Black Sea ports, the Kremlin said.

A branch of Ukraine's Orthodox Church that remained loyal to Moscow after a 2019 schism has said it will break with the Russian church over the country's invasion of Ukraine.

Ukraine was given permission by the spiritual leader of Orthodox Christians worldwide to form a church independent of Moscow in 2019, largely ending centuries of religious ties between the two countries.

However many parishes, especially in Ukraine's east, elected to remain loyal under the umbrella of the Ukrainian Orthodox Church-Moscow Patriarchate.

Following a meeting of of its leadership the church announced that it would declare its "full independence" from Russia.

The statement condemned Russia's Feb. 24 invasion of Ukraine and the support of Patriarch Kirill, the head of Russia’s church, for what Moscow calls its "special military operation" to combat anti-Russian nationalists. Ukraine says the full-scale invasion was entirely unprovoked.

A 2020 survey by the Kyiv-based Razumkov Centre found that 34% of Ukrainians identified as members of the main Orthodox Church of Ukraine, while 14% were members of Ukraine’s Moscow Patriarchate Church.

Ahead of Friday's decision, more than 400 parishes had left the Ukrainian Orthodox Church-Moscow Patriarchate in the aftermath of the invasion.

Russia's defence ministry said on Saturday that the eastern Ukrainian town of Lyman had fallen under the full control of Russian and Russian-backed forces in the region.

Pro-Russian separatists from the self-proclaimed Donetsk People's Republic had said on Friday that they had fully captured the town, a railway hub west of Sievierodonetsk.

Ukraine said on Friday that Russia had captured most of Lyman but that its forces were blocking an advance to Sloviansk, a city 20 kilometres (12 miles) southwest.

Ukrainian and Russian forces have been fighting for Lyman for several days.

In a daily update, Russia said it had used missile strikes to destroy Ukrainian command posts in Bakhmut and Soledar.

Both towns lie on a strategically important road running southwest from Lysychansk and Sievierodonetsk, where the main Russian offensive is now concentrated.

The ministry also said it had destroyed five command and observation posts, hit areas where Ukrainian soldiers and equipment were located and destroyed four ammunition depots near the towns of Nyrkove, Bakhmut and Myronivka.

Reuters could not independently confirm the Russian claims.Russia forces turned their focus to the Donbas region after running into fierce Ukrainian resistance in other parts of the country and abandoning an assault on Kyiv.

Russia says it is waging a "special military operation" to demilitarise the country and rid it of nationalists threatening Russian-speakers there. Kyiv and Western countries say Russia's claims are a false pretext to attack the country.

"The coastal defence of our country will not only be strengthened by Harpoon missiles – they will be used by trained Ukrainian teams," Reznikov wrote on his Facebook page.

He said Harpoon shore-to-ship missiles would be operated alongside Ukrainian Neptune missiles in the defence of the country's coast including the southern port of Odesa.

After launching its invasion of Ukraine on Feb. 24, Russia imposed a naval blockade of Ukrainian ports, hampering vital grain exports.

It has also used its Black Sea fleet to launch missile attacks against Ukraine, which has since started receiving Western military aid.

Reznikov said the supplies of Harpoon missiles were the result of cooperation between several countries, saying the deliveries from Denmark took place "with the participation of our British friends".

US Defense Secretary Lloyd Austin said on Monday that Denmark would provide a harpoon launcher and missiles to Ukraine.

Reznikov said Ukraine had also received a range of heavy artillery pieces, including modified US-made M109 self-propelled howitzers that will allow the Ukrainian military to strike targets from longer distances.

Last month, a senior US defense official said the US military had started training a small number of Ukrainian troops on using howitzer artillery, adding that the training was being conducted outside of Ukraine.

Ukraine has said it wants to secure deliveries of U.S.-made long-range M270 multiple-rocket launchers (MLRS) and use them in repelling Russian troops in the east of the country.

The Harpoon is an all-weather, over-the-horizon, anti-ship missile that uses active radar homing and flies just above the water to evade defences. It can be launched from ships, submarines, aircraft or coastal batteries.

Russia says its forces are on a special operation to demilitarise Ukraine and rid it of radical anti-Russian nationalists. Ukraine and its allies call that a false pretext to invade Ukraine on February 24.

A ship has entered the Ukrainian port of Mariupol for the first time since Russia completed its capture of the city to load metal and ship it east to Russia, TASS news agency reported on Saturday, in a move that Kyiv decried as looting.

A spokesperson for the port told TASS that the vessel would be loading 2,700 tonnes of metal before travelling 160 km (100 miles) east to the Russian city of Rostov-on-Don on Monday.

The spokesperson did not say where the metal being shipped had been produced.

"Looting in the temporarily occupied territories of Ukraine continues," she wrote on the Telegram messaging app."

Following the theft of Ukrainian grain, the occupiers resorted to exporting metal products from Mariupol.

"Ukraine's largest steelmaker Metinvest on Friday said it was concerned that Russia may use several ships stranded in Mariupol to "steal and smuggle metallurgical products" belonging to the group. It accused Russia of piracy.

Asked on Saturday whether the metal due to be shipped out belonged to Metinvest, a company spokesman said: "We said yesterday that our metal is in the port of Mariupol, yes."

Russia seized full control of Mariupol last week when more than 2,400 Ukrainian fighters surrendered at the besieged Azovstal steelworks on the Azov Sea. It said on Thursday that the port had been demined and was open again to commercial vessels.

Moscow's capture of Mariupol helped it secure full control of the Sea of Azov coast and create a land bridge linking mainland Russia to Crimea, which it annexed from Ukraine in 2014.

Russia sent tens of thousands of troops into Ukraine on February 24 in what it called a special operation to demilitarise its southern neighbour and rid it of nationalists threatening Russian speakers there.

Kyiv and Western countries have dismissed Russia's claims a baseless pretext to invade.

Ukrainian presidential adviser and peace talks negotiator Mykhailo Podolyak said on Saturday that any agreement with Russia cannot be trusted and Moscow can only be stopped in its invasion by force.

"Any agreement with Russia isn't worth a broken penny, Podolyak wrote on the Telegram messaging app. "Is it possible to negotiate with a country that always lies cynically and propagandistically?"

Russia and Ukraine have blamed each other after peace talks stalled, with the last known face-to-face negotiations on March 29.

The Kremlin said earlier this month Ukraine was showing no willingness to continue peace talks, while officials in Kyiv blamed Russia for the lack of progress.

On Monday, Ukrainian President Volodymyr Zelenskiy said that President Vladimir Putin was the only Russian official he was willing to meet with to discuss how to end the war.

Putin says Russian forces are on a special operation to demilitarise Ukraine and rid it of radical anti-Russian nationalists. Ukraine and its allies call that a false pretext to invade Ukraine on Feb. 24.

"Russia has proved that it is a barbarian country that threatens world security," Podolyak said. "A barbarian can only be stopped by force."

The governor of Ukraine's Luhansk region, Serhiy Gaidai, said early on Saturday that there are some 10,000 Russian troops in the eastern region.

"These are the (units) that are permanently in Luhansk region, that are trying to assault and are attempting to make gains in any direction they can," Gaidai said on Ukrainian television.

Reuters could not independently verify the report.

Russian gas producer Gazprom said on Saturday its supply of gas to Europe through Ukraine via the Sudzha entry point stood at 43.96 million cubic metres (mcm), slightly up from 43.6 mcm on Friday.

An application to supply gas via another major entry point, Sokhranovka, was rejected by Ukraine, Gazprom said.