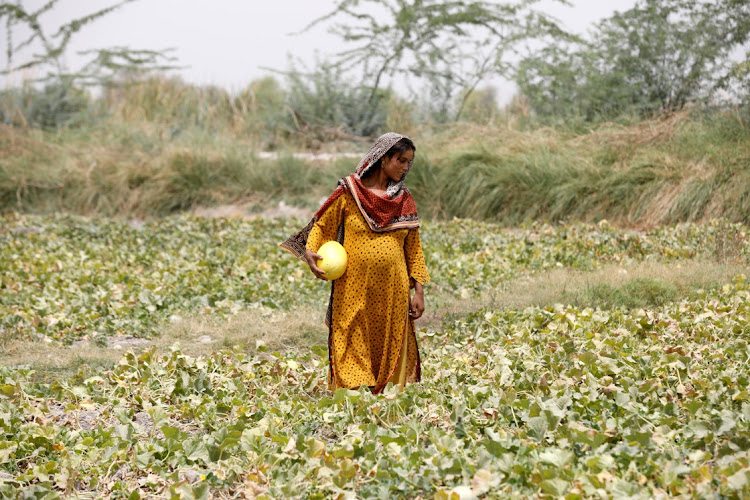 Heavily Pregnant, Sonari, collects muskmelons during a heatwave, at a farm on the outskirts of Jacobabad, Pakistan, May 17, 2022. "When the heat is coming and we're pregnant, we feel stressed," said Sonari.
Image: REUTERS/Akhtar Soomro

Heavily pregnant Sonari toils under the burning sun in fields dotted with bright yellow melons in Jacobabad, which last month became the hottest city on Earth.

Her 17-year-old neighbour Waderi, who gave birth a few weeks ago, is back working in temperatures that can exceed 50 Celsius (122 Fahrenheit), with her newborn lying on a blanket in the shade nearby so she can feed him when he cries.

“When the heat is coming and we're pregnant, we feel stressed,” said Sonari, who is in her mid-20s.

These women in southern Pakistan and millions like them around the world are at the searing edge of climate change.

Pregnant women exposed to heat for prolonged periods of time have a higher risk of suffering complications, an analysis of 70 studies conducted since the mid-1990s on the issue found.

For every 1 degree Celsius in temperature rise, the number of stillbirths and premature deliveries increases by about 5%, according to the meta-analysis Global Consortium on Climate and Health Education at Columbia University, which was carried out by several research institutions globally and published in the British Medical Journal in September 2020.

Cecilia Sorensen, director of the Global Consortium on Climate and Health Education at Columbia University, said the unfolding impact of global warming on the health of women was “highly underdocumented”, partly because extreme heat tended to exacerbate other conditions.

“We're not associating health impacts on women and often times it's because we're not collecting data on it,” she said. “And often women in poverty are not seeking medical care.”

“Heat is a super big deal for pregnant women.”

Women are especially vulnerable to rising temperatures in poor countries on the front lines of climate change because many have little choice but to work through their pregnancies and soon after giving birth, according to interviews with more than a dozen female residents in the Jacobabad area as well as half a dozen development and human rights experts.

Further adding to the risks, women in socially conservative Pakistan — and many other places — typically cook the family meals over hot stoves or open fires, often in cramped rooms with no ventilation or cooling.

“If you're inside cooking next to a hot open fire you have that burden of that heat in addition to the ambient heat which makes things that much more dangerous,” Sorensen added. 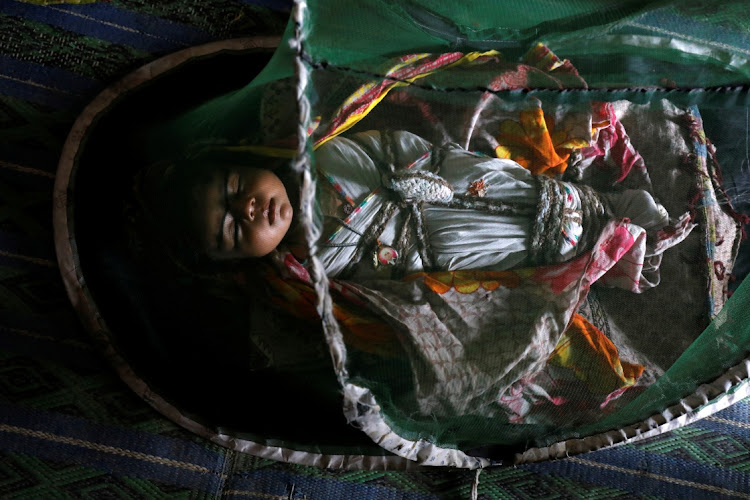 One-month-old Vamar Kumar, sleeps at home under a mosquito net, during a heatwave, on the outskirts of Jacobabad, Pakistan, May 17, 2022. Last month Jacobabad became the hottest city on Earth. Women are especially vulnerable to rising temperatures in poor countries on the frontlines of climate change because many have little choice but to work through their pregnancies and soon after giving birth, according to interviews with more than a dozen female residents in the Jacobabad area as well as half a dozen development and human rights experts.
Image: REUTERS/Akhtar Soomro

South Asia has suffered unseasonably hot temperatures in recent months. An extreme heatwave that scorched Pakistan and India in April was 30 times more likely to happen due to climate change, according to scientists at World Weather Attribution, an international research collaboration. Global temperatures have risen by about 1.2 °C above pre-industrial levels.

As temperatures continue rising, extreme heatwaves are only expected to increase.

Jacobabad's roughly 200,000 residents are well aware of their reputation as one of the world's hottest cities.

“If we go to hell, we'll take a blanket,” is a common joke told in the area.

Few places are more punishing. Last month, temperatures hit 51 Celsius (124 Fahrenheit) on May 14, which local meteorological officials was highly unusual for that time of year. Tropical rains can also conspire with warm winds from the Arabian Sea to drive up humidity later in the year.

The more humid it is, the harder it is for people to cool down via sweating. Such conditions are measured by “wet bulb temperatures,” taken by a thermometer wrapped in a wet cloth. Wet bulb temperatures of 35C or higher are considered the limit to human survival.

Jacobabad has crossed that threshold at least twice since 2010, according to regional weather data. And, globally, such “extreme humid heat events” have more than doubled in frequency in the last four decades, according to a May 2020 study in the journal Science.

Sonari, who is in her 20s, and Waderi work alongside about a dozen other women, several of them pregnant, in the melon fields about 10km from Jacobabad's centre.

They begin work each day at 6am with a short afternoon break for housework and cooking before returning to the field to work until sundown. They describe leg pains, fainting episodes and discomfort while breastfeeding.

“It feels like no-one sees them, no-one cares about them,” aid worker Liza Khan said more broadly about the plight facing many women in Jacobabad and the wider Sindh region which straddles the border of Pakistan and India.

Khan's phone rings constantly as she drives to one of three heatstroke response centres she has helped set up in recent weeks as part of her work with a non-profit group called the Community Development Foundation.

With a finance degree, Khan has lived in cooler cities across Pakistan but returned to her hometown because she wanted to be a voice for women in the conservative area.

“Nowadays I'm working 24/7,” said the 22-year-old, adding that her organisation was finding the impact of extreme heat increasingly intertwining with other social and health issues affecting women. Women and children wash themselves after work at a muskmelon farm, during a heatwave, at a hand pump on the outskirts of Jacobabad, Pakistan, May 17, 2022.
Image: REUTERS/Akhtar Soomro

THE FRONTLINES OF SUFFERING

The harsh conditions facing many women were brought into tragic focus on May 14, the day temperatures in Jacobabad hit 51C, making it the world's hottest city at that time.

Nazia, a young mother of five, was preparing lunch for her visiting cousins. But with no air conditioning or fan in her kitchen, she collapsed and was taken to a nearby hospital, where she was pronounced dead from a suspected heat stroke

District health officials did not answer requests for comment about Jacobabad's record of heat-related deaths in recent years, or more specifically about Nazia's case.

Her body was taken the following day to her ancestral village to be buried and her children, the youngest a one-year old who was still breastfeeding, regularly cry for their mother, a relative said.

Widespread poverty and frequent power cuts mean many people can't afford or use air conditioning or at times even a fan to cool down.

Potential strategies recommended by experts include providing clean-energy stoves to replace open-fire cooking, offering women's medical and social services during early morning or evening hours when it is cooler and replacing tin roofs with cooler material in white to reflect solar radiation away from the home.

Climate Change Minister Sherry Rehman told Reuters that women were likely bear the brunt of rising temperatures as they continued to scorch the country, adding that climate change policies in the future needed to address the specific needs of women.

“A megatrend like climate change ... poses a significant threat to the wellbeing of unempowered women in rural areas and urban slums,” she added. “Pakistani women, especially on the margins, will be impacted the most.”

Some in Jacobabad find it galling that Pakistan is responsible for just a fraction of the greenhouse gases released in the industrial era and now warming the atmosphere.

“We are not contributing to the worsening, but we are on the front lines as far as suffering is concerned,” said Hafeez Siyal, the city's deputy commissioner. 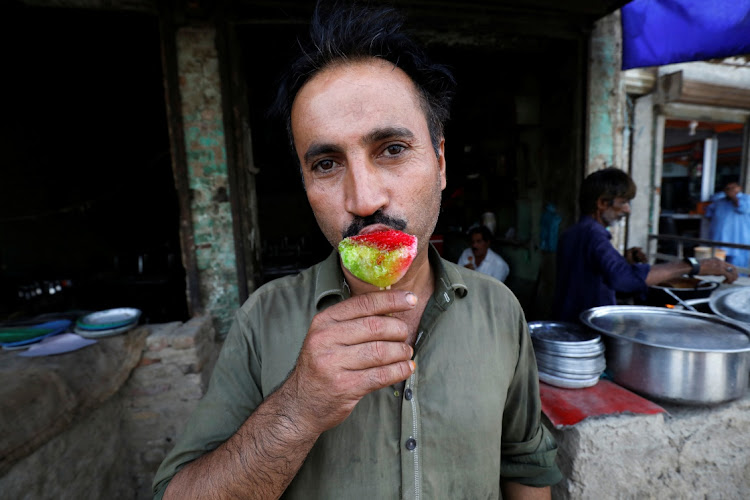 A man poses for a photo as he eats gola ganda, a shaved ice dessert, to cool off outside a cafe in Jacobabad, Pakistan, May 16, 2022. Jacobabad's roughly 200,000 residents are well aware of their reputation as one of the world's hottest cities. "If we go to hell, we'll take a blanket," is a common joke told in the area. Few places are more punishing. Last month, temperatures hit 51 Celsius (124 Fahrenheit) on May 14, which local meteorological officials was highly unusual for that time of year.
Image: REUTERS/Akhtar Soomro

NO WATER, NO POWER, WE PRAY

In a residential neighbourhood of the city, a donkey-drawn cart stacked with blue plastic jerrycans stops near the entrance to warren-like lanes leading to a cluster of homes. The cart's driver runs back and forth delivering 20-litre containers of water from one of a few dozen private pumps around the city.

Most residents of Jacobabad rely on such water deliveries, which can cost between a fifth and an eighth of a household's meagre income. Still, it's often not enough, and some families are forced to ration.

For young mother Razia, the sound of her six-month-old Tamanna crying in the afternoon heat was enough to persuade her to pour some of her precious water over the baby. She then sat Tamanna in front of a fan, and the child was visibly calmer, playing with her mother's scarf.

Local officials said water shortages were partly due to electricity cuts, which mean water cannot be filtered and sent via pipes throughout the city. There are also severe water shortages across Sindh, with climate change minister Rehman flagging shortfalls of up to 60% of what is needed in the province's key dams and canals.

Rubina, Razia's neighbour, fried onions and okra over an open fire, explaining she usually felt dizzy in the heat and tried to soak herself in water each time she cooked to prevent herself from fainting.

There was not always enough water to do so, though.

“Most of the time, it ends before it's time to buy more and we must wait,” Rubina said as she closely supervised her children and grandchildren sharing a cup of water. “On the hot days with no water, no electricity we wake up and the only thing we do is pray to God.”