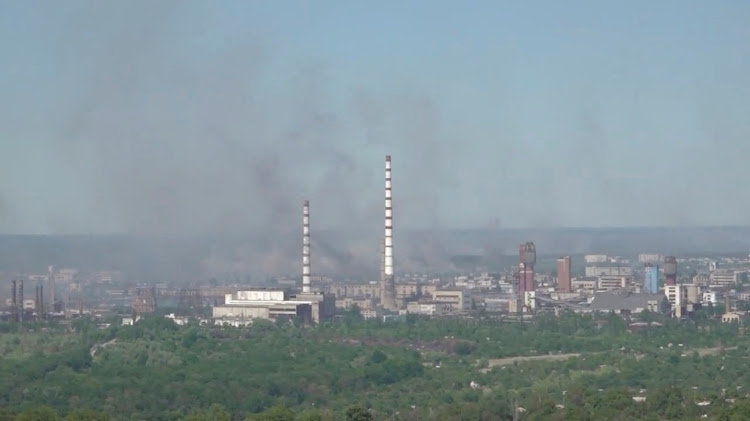 Ukraine says more than 500 civilians, including 40 children, are trapped alongside soldiers inside the Azot chemical factory, where its forces have resisted weeks of Russian bombardment that has reduced much of Sievierodonetsk to ruins.
Image: Luhansk Region Police/Handout via REUTERS / File photo

Russia had told Ukrainian forces holed up in a chemical plant in the shattered city to stop “senseless resistance and lay down arms” from Wednesday morning, pressing its advantage in the battle for control of eastern Ukraine.

Plans announced by Moscow to open a humanitarian corridor for civilians stuck in the plant were disrupted by Ukrainian shelling, Russian-backed separatists were quoted by RIA news agency as saying. The separatists had planned to take the civilians to territory under their own control.

Ukraine says more than 500 civilians, including 40 children, are trapped alongside soldiers inside the Azot chemical factory, where its forces have resisted weeks of Russian bombardment that has reduced much of Sievierodonetsk to ruins.

The mayor of Sievierodonetsk, Oleksandr Stryuk, said after the early morning deadline passed that Russian forces were trying to storm the city from several directions but Ukrainian forces continued to defend it and were not completely cut off.

“We are trying to push the enemy towards the city centre,” he said on television, without referring to the ultimatum. “This is an ongoing situation with partial successes and tactical retreats.”

“The escape routes are dangerous, but there are some,” he said.

Serhiy Gaidai, governor of the Luhansk region containing Sievierodonetsk, said the army was defending the city and keeping Russian forces from Lysychansk, the twin city held by Ukraine on the opposite bank of the Siverskyi Donets river.

“Nevertheless, the Russians are close and the population is suffering and homes are being destroyed,” he posted online just before Russia's 8am. Moscow time (0500 GMT) deadline.

Luhansk is one of two eastern provinces Moscow claims on behalf of separatist proxies. Together they make up the Donbas, an industrial Ukrainian region where Russia has focused its assault after failing to take Ukraine's capital Kyiv in March.

British intelligence said the fighters in the chemical plant could survive underground and Russian forces would likely remain focused on them, keeping them from attacking elsewhere.

Reuters could not immediately verify the battlefield accounts.

The Azot bombardment echoes the earlier siege of the Azovstal steelworks in the southern port of Mariupol, where hundreds of fighters and civilians took shelter from Russian shelling. Those inside surrendered in mid-May and were taken into Russian custody.

The sprawling ammonia factory was founded under Soviet leader Josef Stalin. Those inside were surviving from water from wells, generators and supplies of food that had been brought in, the city's mayor, Stryuk, said, but the situation was critical.

Sievierodonetsk — home to around 100,000 people before the war — has become the main focus of what has been called the battle of the Donbas.

Kyiv has said 100-200 of its soldiers are killed each day, with hundreds more wounded in some of the bloodiest fighting since Russia's Feb. 24 invasion.

“We have to hold strong ... The more losses the enemy suffers, (the) less strength it will have to pursue its aggression,” Zelensky said in an address late Tuesday. On Wednesday, he called for more European sanctions against Russia.

'BRUSSELS, WE ARE WAITING'

Western countries have promised NATO-standard weapons — including advanced US rockets. But deploying them is taking time and Zelensky said Ukraine does not have enough anti-missile systems and there was no justification for delays.

His adviser, Mykhailo Podolyak, said the defenders of Sievierodonetsk wanted to know when the weapons would arrive. “Brussels, we are waiting for a decision,” he wrote on Twitter.

“We are extremely focused on stepping up support,” NATO Secretary General Jens Stoltenberg said before the meeting in Brussels led by U.S. defence Secretary Lloyd Austin. It is the third time the group of nearly 50 countries are meeting to co-ordinate assistance to Ukraine.

In May, the U.S. Senate passed a bill to provide $40 billion in additional aid to Ukraine and has promised longer-range rocket systems, drones and advanced artillery.

Russia gives no regular figures of its own losses but Western countries say they have been massive as President Vladimir Putin seeks full control of the Donbas and a swathe of southern Ukraine. Putin calls the war a special military operation against Ukrainian nationalists.

Elsewhere in the Donbas, Ukraine says Russia plans to attack Sloviansk from the north and along a front near Bakhmut to the south. The sound of shelling could be heard 40km (25 miles) south of Bakhmut near the town of Niu-York, where Ukrainian forces said Russia was throwing everything into the battle.

“For three and a half months we have been standing against the biggest country in the world,” a 22-year-old Ukrainian serviceman nicknamed “Viking” said. “They have taken heavy casualties in vehicles and personnel, but they don't retreat.”

The conflict has sent grain prices soaring and Western sanctions against Russia have driven up oil prices. Ukraine's agriculture minister told Reuters the invasion would create a global wheat shortage for at least three seasons by keeping much of the Ukrainian crop from markets.