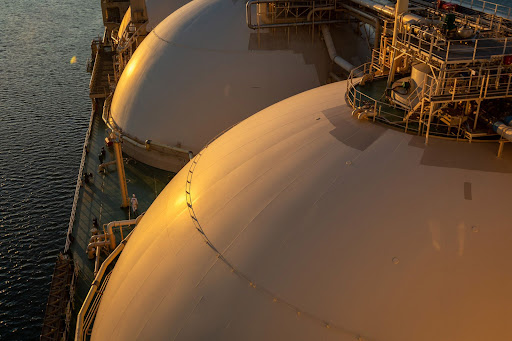 As LNG prices are rising, more and more LNG projects globally are trying to speed up their launches, narrowing opportunities for new supplies from Russia, which is already under pressure due to the lack of foreign equipment, says Novatek's CEO. File photo.
Image: Bloomberg

Western sanctions imposed on Moscow after it sent troops into Ukraine saw Russia largely blocked from the global financial system and from foreign equipment essential for its energy sector, airspace, car industry and many other industrial areas.

Before the recent conflict in Ukraine which Moscow calls a "special military operation", Russia planned to produce as much as 140-million tonnes of LNG by 2035, or a quarter of current global LNG exports, and up from 40-million tonnes now.

Russia is sticking to its goal of 140-million tonnes of supercooled gas annually, or 15-20% of the global LNG market, Pavel Sorokin, Russia's first deputy energy minister, told a forum on Friday, but added that the target date may have to shift.

He did not say when Russia now plans to reach that target.

As LNG prices are rising, more and more LNG projects globally are trying to speed up their launches, narrowing opportunities for new supplies from Russia which is already under pressure due to the lack of foreign equipment, Novatek's CEO said.

“We need to develop a local liquefaction technology for which a full-scale localisation, backed by a full (state) financing is needed,” Leonid Mikhelson told the same forum.

Novatek, Russia's top LNG producer followed by the state gas company Gazprom, has nearly completed the first LNG production line at its second project, the Arctic LNG 2, but its second and third lines face difficulties due to the sanctions and logistics, Mikhelson has said.

According to Mikhelson, investments into a LNG production line stand at around 400-billion roubles (R112.4bn) and equipment offered by some Russian companies costs as much as twice as Novatek used to pay in Japan before the sanctions.

Novatek has said it expects a slight delay to the launch of its Arctic LNG 2 project due to supply bottlenecks.

Europe steps up support for Ukraine as Russia presses offensive

Britain will host talks on Friday on rebuilding key infrastructure in Kyiv, a day after the leaders of Germany, France and Italy visited Ukraine and ...
News
1 month ago