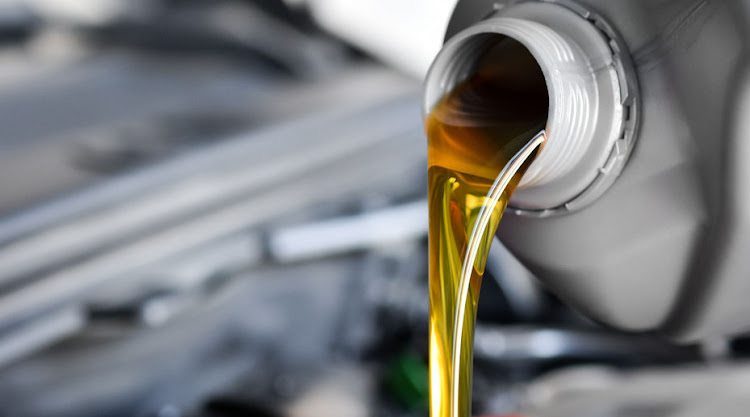 The US has become the world's oil barrel of last resort, single-handedly keeping prices in the energy market from exploding even higher by selling a large chunk of its Strategic Petroleum Reserve. Washington can’t use the reserve forever: it’s a finite stockpile fighting a potentially unlimited flow shortage. More worryingly, the US is depleting its cache a lot faster than it looks.

And that matters. The International Energy Agency earlier this week warned that “global oil supply may struggle to keep pace with demand next year.” The SPR may be the final cushion late this year and in 2023 to put a lid on oil prices — and global inflation. What Federal Reserve Chair Jerome Powell and his peers around the world do with interest rates hinges in large part on energy market developments.

To understand the limits of the SPR, one has to go into the plumbing of the reserve itself, and the inner workings of the US oil-refining industry. Over the past year, the White House has sold almost 115 million barrels from its hoard, with the releases surging to a record high of nearly one million barrels per day since mid-May. At the current rate, the US is selling more barrels from its reserve than the production of most medium-sized Opec countries, such as Algeria or Angola.

If Washington sticks to its current pace, the reserve will shrink to a 40-year low of 358 million barrels by the end of October, when the releases are due to stop. A year ago, the SPR, located in four caverns in Texas and Louisiana, contained 621 million barrels. As the oil market looks today, it’s difficult to see how Washington can halt sales in October. Removing that additional supply would mean commercial inventories quickly deplete, putting upward pressure on oil prices. 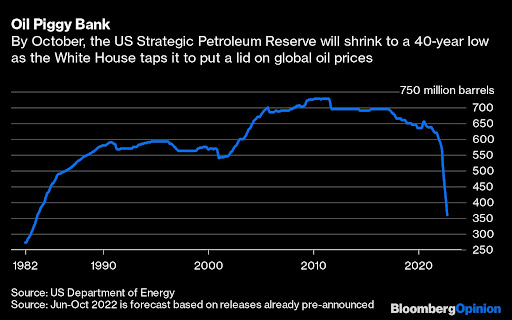 The composition of the US crude cache will be the next key development for energy markets.
Image: Bloomberg

In theory, what’s going to be left beyond October would still allow the White House to sell more crude in November and December, and into next year. But there’s an important catch: Not all of the crude set aside is equal, and what’s left is, increasingly, far less useful than what’s already gone.

Broadly speaking, the SPR contains two kinds of crude: medium-sour, and light-sweet. The first adjective refers to the oil’s density, the second is about sulphur content. Typically, US refiners prefer medium-sour crude, which is denser and has more sulphur but is a variety they can easily process into gasoline and other products thanks to their highly sophisticated plants.

The medium-sour the US has set aside matches the kind of crude its domestic refiners process. The stockpiled medium-sour has a density of 31.9 API degrees and a sulphur content of 1.44%, mirroring the average crude Americans refiners have processed over the last five years, which has a density of 32.6 degrees and 1.34% sulphur. The light-sweet in the reserves has a much higher density, at 35.8 degrees, and far less sulphur, at 0.4%. Medium-sour is the quality of crude pumped by Russia, most Middle Eastern countries and Venezuela.

For that reason, the White House has prioritised the sale of medium-sour barrels, satiating the refiners’ appetite for their favourite crude. Over the last year, 85% of the oil the SPR has sold has been medium-sour, according to an analysis based on government data. Considering that refining is one of the biggest bottlenecks right now in the oil market, satisfying the preferred diet of American oil refiners is crucial. The biggest companies — Marathon Petroleum Corp. and Valero Energy Corp. — have been big buyers at SPR auctions in the last six months, helping the industry to profit from record-high refining margins.

What’s left still leaves the White House with some ammunition — but not a lot. Already, the government has started to offer more light-sweet crude than medium-sour in its most recent tender for SPR barrels. Regardless of the preference of refiners, any barrel is still better than no barrels. But with the good stuff already nearly gone, the world can’t keep relying on the US strategic reserve to keep oil prices in check.

With that in mind, next month’s trip by President Joe Biden to Saudi Arabia makes a lot more sense. The Saudis, and their neighbours in the United Arab Emirates, pump medium-sour crude. That’s all what you need to know.