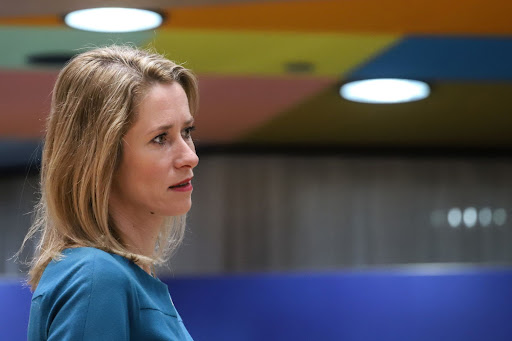 Estonian Prime Minister Kaja Kallas, known for her fierce criticism of Vladimir Putin and his war in Ukraine, is fighting to stay in power after she dismantled her ruling coalition, saying it lacked unity to face the dangers of Russia.
Image: Bloomberg

Estonia expects next week's Nato summit in Madrid to designate additional units for its defence, but the troops would not be hosted on its soil in a compromise from demands for boots on the ground, Estonian Prime Minister Kaja Kallas told Reuters.

Since Russia invaded Ukraine in February, the Baltic states of Estonia, Latvia and Lithuania have been calling for their region to receive the biggest build-up of combat-ready Nato forces in Europe since the end of the Cold War, fearing they could be next.

Senior diplomats and officials from Nato allies have told Reuters the Baltic demand is unfeasible, partly because the proposals come as the Nato alliance faces a slew of demands not seen in decades: from countering Russia and China in the Arctic to quelling Islamist insurgencies in the Sahel, and tackling new frontiers in space.

Acknowledging Estonia would not be receiving Nato troops stationed there, Kallas said the allied troops could be deployed in Estonia “within hours” if needed.

“Considering how mobile the forces right now are, and how very difficult it is to send permanently troops, we have proposed such a structure of allocated forces,” Kallas said on Wednesday night from Tallinn.

“There troops are, for example, in the UK or other allies, but ... if something happens, they are immediately able to come here and defend us from the first day.”

Though the approval of the Kyiv government's application by EU leaders meeting in Brussels is just the start of what will be a years-long process, it ...
News
1 week ago

Reuters has contacted Nato for comment. Britain said last week it could send more troops to Estonia and lead a brigade there, echoing German plans in Lithuania ahead of the Nato summit to agree deployments on the alliance's eastern flank in response to Russia's war in Ukraine.

The set-up would include equipment for incoming troops warehoused in Estonia, Kallas said.

Kallas said she believed Nato would name Russia as a persistent threat to the allies.

“If we have plans together, if we have troops allocated to us, it means our neighbour aggressor knows there is no point to take up this fight, because you will never win this fight,” she said.

Baltic states do not operate fighter jets and a Nato mission is patrolling their airspace, but Kallas said the Nato jets should be given right to combat a hostile aircraft if needed. She pointed to a short incursion of Russian military helicopters to Estonian airspace earlier this week.

“We feel that the current air policing mission should be turned into air defence mission”, she said. “So far[Russian aircraft] haven't been hostile but if they are hostile, these Nato planes should have the right to use force as well.”

Estonia, Lithuania and Latvia were part of the Russian empire before breaking off in the aftermath of World War 1. In 1940 the Soviet Union annexed the trio, which did not regain their independence until 1991.

Leaders from the Group of Seven rich democracies and the Nato alliance will work to increase pressure on Russia over its war in Ukraine next week, ...
News
1 week ago

The actor travelled to Poland and Ukraine to meet people who had fled their homes since Russia's invasion began.
Lifestyle
1 week ago