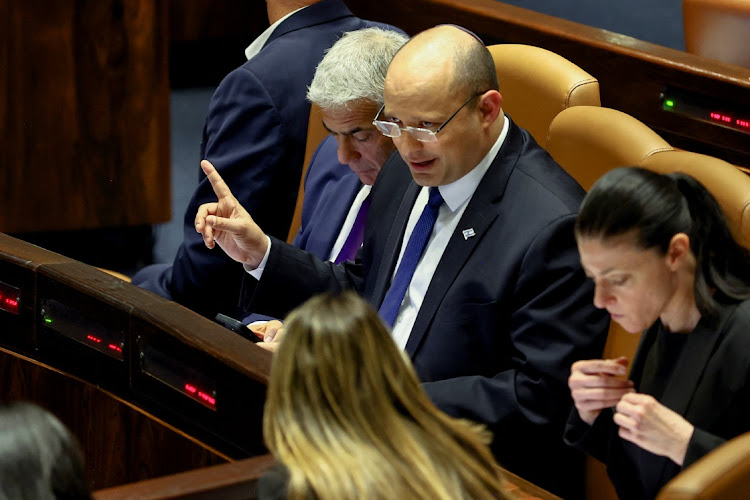 Israeli Foreign Minister Yair Lapid and Prime Minister Naftali Bennett attend a preliminary reading at the Israeli parliament, the Knesset, of a bill to dissolve the parliament, in Jerusalem, June 22, 2022.
Image: REUTERS/Ronen Zvulun

Israel's economy is expected to be resilient during yet another election cycle, but households will suffer as reforms to reduce the cost of living are likely to be shelved and state spending will be scaled back until a 2023 budget is approved.

Prime Minister Naftali Bennett moved this week to dissolve parliament and call Israel's fifth election in less than four years after infighting made the ruling coalition no longer tenable. The poll is expected to take place some time between late September and early November — which means months of policy paralysis.

Fixed capital investment and private spending are on the rise and exports are expected to bounce back after a weak start to the year.

“Further political uncertainty is somewhat negative for markets, though Israel unfortunately has much experience with this scenario,” said Jonathan Katz, chief economist at Leader Capital Markets. “The major downside is the lack of fiscal reforms and policy.”

Foreign Minister Yair Lapid will head a caretaker government once an election date is decided next week. After a vote it typically takes weeks for a coalition to be formed.

“We now assume a more limited role of the government in the policy space with respect to inflation this year. We ... think the Bank of Israel will be emboldened to take firmer action against inflation,” said JPMorgan economist Jessica Murray.

Inflation has reached an 11-year high of 4.1%, which is lower than most Western countries and the central bank has started to raise interest rates but public anger is growing about what Israelis see as steep price rises across goods and services.

The government had responded with planned reforms to boost construction starts and expand a discount scheme aimed at restraining rapidly rising property prices as demand continues to outstrip supply.

It also announced plans to open up the food and agriculture sector to more imports rather than protecting local industry. However, these reforms and measures have yet to receive final parliamentary approval, and will now be on hold until at least next year.

Public sector wage agreements will also likely be delayed, as will an initiative to boost the minimum wage and spending on public sector infrastructure projects.

Citi economist Michel Nies said moving projects to the back burner could affect Israel's growth potential, and fiscal and monetary policies in the longer term.

A vote on the 2023 budget, which had been expected by November, has likely been pushed back until a new government is formed.

The economy, though, is supported by improving public finances thanks to rising tax revenue this year, which enabled the government to balance its budget in May.

“The fiscal stance is one of consolidation and this will continue through the election period and probably into next year,” Murray said.

“The strong improvement in Israel's balance of payments has reduced the sensitivity of Israel's economy to political developments in the region,” said Goldman Sachs economist Tadas Gedminas.

Bank of Israel Governor Amir Yaron said on Tuesday that the country's institutional system makes it possible for the economy to function properly during election campaigns.

“The Israeli economy has proven to have an impressive ability to grow and prosper even under conditions of uncertainty — political and otherwise,” he said.