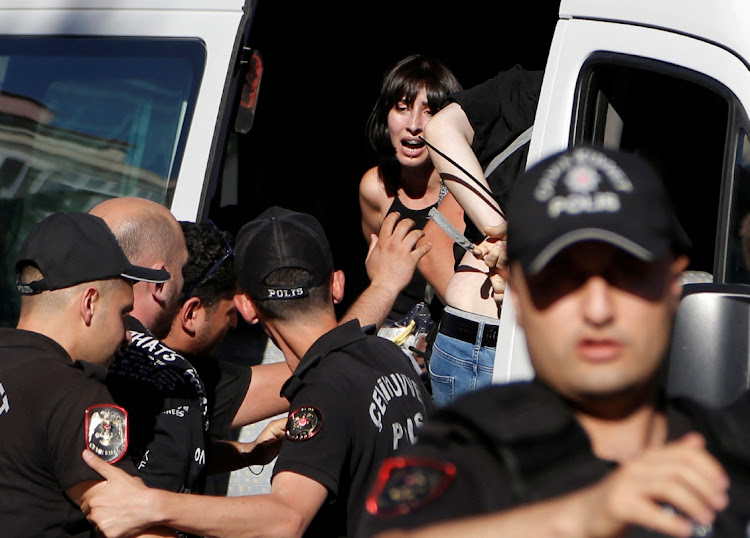 Police officers detain activists to prevent them from marching in a pride parade, which was banned by local authorities, in Ankara, Turkey July 5, 2022.
Image: REUTERS/Cagla Gurdogan

Turkish police used teargas and pepper spray to halt an LGBTQ+ Pride march in the capital Ankara on Tuesday, detaining at least 36 people after authorities banned such marches in cities across the country for security reasons.

Reuters journalists saw police pepper spraying activists and dragging them across the ground before handcuffing them and putting them in buses. UniKuir, an Ankara based group of LGBTQ+ activists, said at least 36 people were detained.

Thousands of people used to attend annual Pride marches on Istanbul's main Istiklal Avenue, but in recent years the government led by President Tayyip Erdogan and his Islamist-rooted AK Party has toughened its stance on gay rights.

Homosexuality is not a crime in Turkey, but hostility to it is widespread and police crackdowns on Pride parades have been increasingly tougher over the years.

"My mom wasn't celebrated enough and I want people to remember her " - Coachella Randy on his career.
TshisaLIVE
1 month ago

Despite gay relationships being banned, the community is set to celebrate the global event
World
1 month ago

I was arrested because I’m a lesbian, says Groblersdal murder accused

Simoné Papapavlou, who allegedly killed her husband, is seeking support from the LGBTQI+ community
News
1 month ago