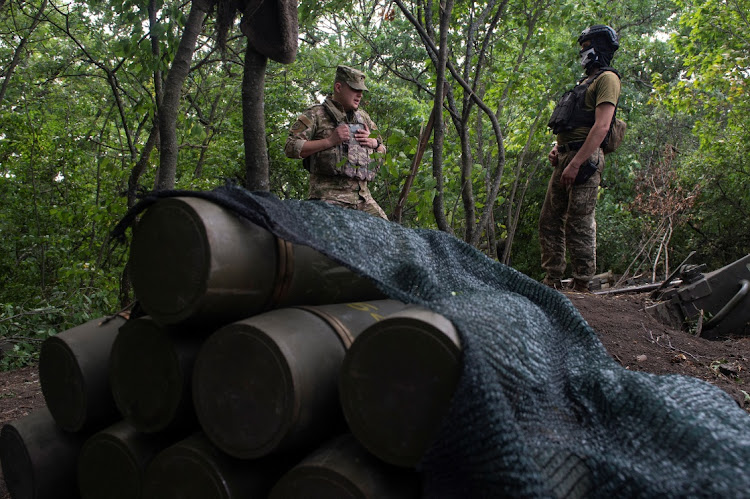 Ukrainian servicemen stand near shells for an M777 howitzer at a position on a front line, as Russia's attack on Ukraine continues, in Kharkiv region, Ukraine August 1, 2022.
Image: REUTERS/Sofiia Gatilova

Ukraine's state-owned gas company Naftogaz laid out a new debt payment freeze plan on Tuesday, a week after becoming the first government entity to default since the start of the Russian invasion in late February.

With one proposal already rejected by bondholders, Naftogaz's plan offered additional incentives, including added interest payments, in a bid to secure backing for a two-year moratorium on debt payments.

The solicitation, made by Naftogaz through its financial arm Kondor Finance, includes deferral of principal payments for two years on notes due on 2022, 2024 and 2026.The default on the 2022 bond payment may trigger acceleration of payments on the other notes, but does not trigger a sovereign cross default.

Holders have until Aug. 12 to cast their vote on the solicitation, the document showed.

A long queue of Russians snaked through a Moscow shopping centre on Tuesday, waiting to get into H&M as the fashion retailer flung open its doors for a final time to sell inventory before making a full exit from the Russian market.

Scores of consumer brands suspended operations in Russia after Moscow sent tens of thousands of troops into Ukraine on Feb. 24, with H&M, IKEA and Nike among the companies to have announced plans for a permanent exit.

"Well, it is closing, that's why we are standing here," one customer, Irina, told Reuters. "I'm going to buy whatever there is."

"Sadly, the reason why all this is happening is awful," another customer, Ekaterina said.

"Everything else is meaningless, like how we are going to manage (without H&M).

"Furniture giant IKEA has reopened for an online-only sale, but H&M opted to allow customers back in person. Exiting Russia, H&M's sixth-biggest market, is expected to cost the company almost $200 million and affect 6,000 staff.

H&M did not immediately respond to a request for comment on Tuesday.

A company spokesperson in July said H&M would temporarily reopen physical stores in August to sell the remaining inventory in Russia. H&M, the world's second-biggest fashion retailer, rents its 170 physical stores in the country and operates them directly.

kraine has recaptured 53 settlements in the mostly Russian-occupied southern region of Kherson since the start of Moscow's invasion, the regional governor said on Tuesday.

Russia captured swathes of southern Ukraine in the first phase of its Feb. 24 invasion. Ukraine is now pledging to conduct a major counter-offensive to retake land and has used Western-made long-range weapons to hit Russian supply lines.

"As of now, 53 settlements have been confirmed as liberated," acting governor Dmytro Butriy said on national television.

That figure was nine settlements more than the number he gave on Monday, which appeared to indicate a quickening tempo of Ukrainian gains in the region.

The British government said on Tuesday it had reimposed sanctions on two former board members of oil company Rosneft: Didier Casimiro and Zeljko Runje.

The two had been included in an initial wave of sanctions announced in March under rules that allowed Britain to copy sanctions imposed by allies, but they were delisted in July.

The reason for the July delisting was not published and the government did not immediately respond to a request for comment.

Canada said on Tuesday it was imposing more sanctions on Russia that would impact 43 military officials and 17 entities.

"The Russian war machine's egregious actions will not be forgotten, and Canada will continue to work with its partners in the international community to hold it to account," Canadian Foreign Minister Melanie Joly said in a statement.

Canada has imposed sanctions on more than 1,150 individuals and entities in response to Russia's invasion of Ukraine on Feb. 24.

Russia said on Tuesday it had carried out deadly strikes against Ukrainian forces in Ukraine's southern Mykolaiv region and eastern Kharkiv region.

The defence ministry also said it destroyed seven ammo depots in the east and south of the country, including in Zaporizhzhia region.

Reuters was not able to immediately verify battlefield reports.

Ukraine, which has stepped up its drive to retake Russian-controlled regions in the south, said last week it saw evidence Moscow was redeploying its forces to defend the captured territory.

Russia's supreme court on Tuesday designated Ukraine's Azov Regiment as a terrorist group, a Reuters correspondent in the courtroom reported.

The Azov Regiment, which has far-right and ultra-nationalist roots, has been one of the most prominent Ukrainian military formations fighting against Russia in eastern Ukraine.

Russia has regularly cited Azov in support of its assertion that Ukraine is controlled by "fascists". Russian state propaganda has compared Azov fighters to World War Two-era Nazis, whose defeat by the Soviet Union remains a core part of Russian national identity.

Previously based in the eastern Ukrainian port city of Mariupol, many of the regiment's personnel were captured by Russian forces when the city fell in May after an almost three month long siege.

Officials in the Donetsk People's Republic, the Russian-backed entity which claims Mariupol as part of its territory, said in May that captured Azov Regiment fighters could face the death penalty under the self-proclaimed republic's laws.

Kremlin: No replacement for New START would have negative impact on global security

The Kremlin said on Tuesday that if the New START nuclear arms reduction treaty expired without a replacement in 2026 then it would have a very negative impact on global security.

The number of border crossings from Ukraine has surpassed 10 million for the first time since Russia invaded the country, the UN Refugee Agency reported on Tuesday.

A total of 10,107,957 border crossings from Ukraine have been recorded since Feb. 24, the agency's tally showed.

Turkey's representative at the Joint Coordination Centre (JCC) in Istanbul said on Tuesday that the first ship carrying Ukrainian grain to world markets was expected to anchor at Istanbul on Tuesday night.

At a briefing held at the JCC, general Ozcan Altunbudak said the course of the ship was going as planned.

On Monday, the first shipment of Ukrainian grain departed from the Port of Odesa via the Sierra Leone-flagged ship Razoni, marking the first time in months that Kyiv has transported its goods to purchasing nations.

The Russian and Belarusian operations of Raiffeisen Bank International posted the sharpest gains in profit among its subsidiaries in the first half of this year, figures on Tuesday showed, even as the Austrian bank weighs a possible withdrawal from the region.

The profitability of the Russian operations complicates the picture for the Vienna-based bank as it maps out its future in the wake of the war in Ukraine.

RBI, one of Europe's banks most exposed to Russia, has been studying strategic options for the business, including a possible withdrawal from Russia, following the nation's invasion of Ukraine.

"Due to the complex situation and the constantly changing framework conditions, the process will still take some time," Chief Executive Johann Strobl said. He told reporters he couldn't provide a timeframe.

Profit rose 201% in Russia during the first six months of the year to 630 million euros ($645.25 million). RBI attributed the rise to factors including higher interest rates and a stronger rouble.

At the same time, RBI has been reducing its lending volume in Russia, but the profit in Russia nevertheless made up about a third of the entire group's in the first half of the year.

In Belarus, profit rose more than 1700% during the period, though from a low level.

Russia's former president dismissed a call by US President Joe Biden on Monday to press on with talks on a new nuclear arms treaty, saying the appeal was out of place in a changed world.

Dmitry Medvedev, now deputy head of Russia's Security Council, said he had told Washington repeatedly that major issues, like a framework to replace the New START treaty, could not be done without Russian involvement.

Medvedev, writing on his Telegram channel, said Biden had "reluctantly spat out" the call for new talks, referring to Soviet-U.S. arms agreements concluded despite difficulties in the Cold War era."

All this, of course, is good.

But let me say it once again - the situation now is much worse than in the Cold War," wrote Medvedev, who served as president for four years while Vladimir Putin was prime minister.

"A lot worse! And through no fault of our own. The main thing is. ... do we really need this? The world is a different place."

A Russian foreign ministry source had earlier expressed puzzlement about Biden's proposal to negotiate the New START Treaty when it expires in 2026.Biden said in a statement on Monday that his administration was ready to "expeditiously" negotiate a new framework but that Russia should demonstrate that it is ready to resume work on nuclear arms control with the United States.

"Is this a serious statement or has the White House website been hacked?" a Russian foreign ministry source told Reuters. "If this is still a serious intention, with whom exactly do they intend to discuss it?"

It also put limits on nuclear warheads on those deployed missiles and bombers and the launchers for those missiles. Both sides reached the central limits of the treaty by Feb. 5, 2018, and the treaty has been extended to the end of Feb. 4, 2026.

US Secretary of State Antony Blinken on Monday called Russia's actions around Ukraine's largest nuclear power plant "the height of irresponsibility," accusing Moscow of using it as a "nuclear shield" in attacks on Ukrainian forces.

Russia was previously accused of firing shells dangerously close to the Zaporizhzhia plant in March as its forces took it over in the first weeks of the invasion of Ukraine.

Washington was "deeply concerned" that Moscow was now using the plant as a military base and firing on Ukrainian forces from around it, Blinken told reporters after nuclear nonproliferation talks at the United Nations in New York.

"Of course the Ukrainians cannot fire back lest there be a terrible accident involving the nuclear plant," he said.

The Russian mission to the United Nations in New York did not immediately respond to a request for comment on Blinken's remarks.

Ukrainian officials have previously accused Moscow of basing troops and storing military equipment on the grounds of the power station.

On July 20 Russia accused Ukraine of firing two drones at Zaporizhzhia, which is also the largest nuclear plant in Europe, but said the reactor was undamaged.

At a U.N. Security Council meeting on Ukraine on Friday, Russia's deputy U.N. Ambassador Dmitry Polyanskiy accused his Western counterparts of "deliberately" ignoring the July 20 attack and use of "explosive-laden drones of foreign manufacture to attack the plant."

Ukraine's state nuclear company Energoatom did not comment on the purported drone impact.

The International Atomic Energy Agency (IAEA), the U.N.'s atomic watchdog, should be given access to the plant, Blinken said.

"While this war rages on, inaction is unconscionable," IAEA Director General Rafael Grossi said on Twitter. "If an accident occurs at #Zaporizhzhya Nuclear Power Plant in #Ukraine we will not have a natural disaster to blame. We will have only ourselves to answer to."