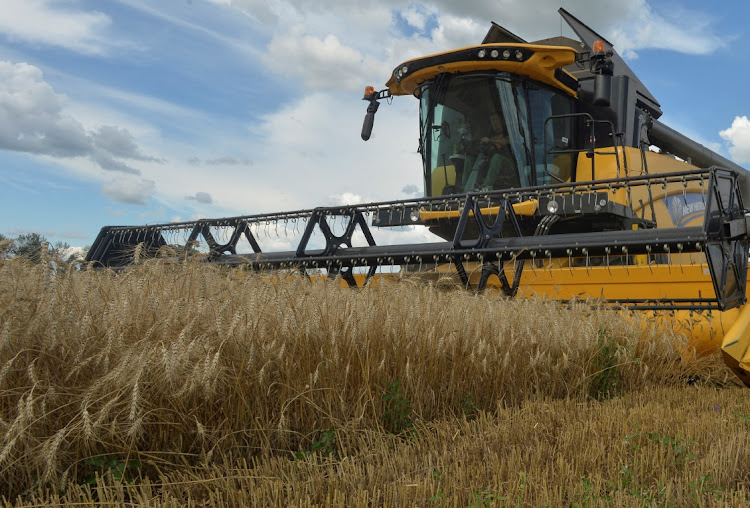 An employee operates a combine as he harvests wheat in a field in Kharkiv region, Ukraine, on July 19 2022. File photo.
Image: REUTERS/Sofiia Gatilova

Russia has accused the US of direct involvement in the Ukraine war, while the first ship carrying Ukrainian grain to world markets since Moscow's invasion is due to be inspected in Turkey on Wednesday.

Russia's defence ministry, headed by an ally of President Vladimir Putin, said comments made by Vadym Skibitsky, Ukraine's deputy head of military intelligence, to Britain's Telegraph newspaper showed Washington was entangled in the conflict despite assertions it was limiting its role to arms supplies.

Skibitsky told the paper there was consultation between US and Ukrainian intelligence officials before strikes and Washington had an effective veto on intended targets, but US officials were not providing direct targeting information.

“All this undeniably proves Washington, contrary to White House and Pentagon claims, is directly involved in the conflict in Ukraine,” the Russian defence ministry said on Tuesday.

“It is the [US President Joe] Biden administration that is directly responsible for all Kyiv-approved rocket attacks on residential areas and civilian infrastructure in populated areas of Donbas and other regions which have resulted in mass deaths of civilians.”

There was no immediate reaction from the White House or Pentagon to the ministry's assertions.

However, the Pentagon did deny Moscow's claims that Russia had destroyed six US-made Himars missile systems since the start of the Ukraine war. Russia regularly claims it has hit Himars but has yet to show proof.

Ukraine and the West accuse Russia of carrying out devastating missile attacks on civilian targets on an almost daily basis. Both sides deny deliberately targeting civilians.

Ukrainian President Volodymyr Zelensky on Tuesday said despite arms supplies from the West, his country's forces could not yet overcome Russian advantages in heavy guns and manpower.

“This is very much felt in combat, especially in the Donbas. It is just hell there. Words cannot describe it.”

Donbas, Ukraine's traditional industrial heartland in the country's east, has seen some of the war's heaviest fighting.

Russia sent tens of thousands of troops into Ukraine on February 24 in what it calls a “special military operation”. Kyiv and the West have condemned it as an unprovoked war of aggression.

At a UN conference on Tuesday, Igor Vishnevetsky, deputy director of the department for non-proliferation and arms control of the Russian foreign ministry, refuted all allegations of “unprovoked aggression”. He said Moscow was convinced a nuclear war “must never be fought”.

When Russia invaded Ukraine in February, mother of two and HIV activist Valeriia Rachynska was already displaced after fleeing her home in Luhansk in ...
News
2 weeks ago

Russian diplomat Alexander Trofimov told the UN Moscow would only use nuclear weapons in response to weapons of mass destruction or a conventional weapons attack that threatened the existence of the Russian state.

“Neither of these two hypothetical scenarios is relevant to the situation in Ukraine,” said Trofimov, a senior diplomat in the non-proliferation and arms control department of Russia's foreign ministry.

The vessel, the Sierra Leone-flagged Razoni, was at the entrance of the Bosphorus Strait, which connects the Black Sea to world markets, around 36 hours after leaving the Ukrainian port of Odesa.

A delegation from the joint co-ordination centre in Istanbul, where Russian, Ukrainian, Turkish and UN personnel work, is expected to inspect the ship early on Wednesday, Turkey's defence ministry said.

UN spokesperson Stephane Dujarric told reporters in New York there were about 27 ships in the three Ukrainian ports covered by the export deal that were ready to go.

The exports from one of the world's top grain producers are intended to help ease a global food crisis.

Known as Europe's breadbasket, Ukraine hopes to export 20-million tonnes of grain held in silos and 40-million tonnes from the harvest under way, initially from Odesa and nearby Pivdennyi and Chornomorsk.

Russia has called the Razoni's departure “very positive” news. It has denied responsibility for the food crisis, saying Western sanctions have slowed its exports.

Putin says no one can win a nuclear war

Russian President Vladimir Putin said on Monday there could be no winners in a nuclear war and no such war should ever be started.
News
2 weeks ago

US President Joe Biden said on Monday he is ready to pursue a new nuclear arms deal with Russia and called on Moscow to act in good faith as his ...
News
2 weeks ago