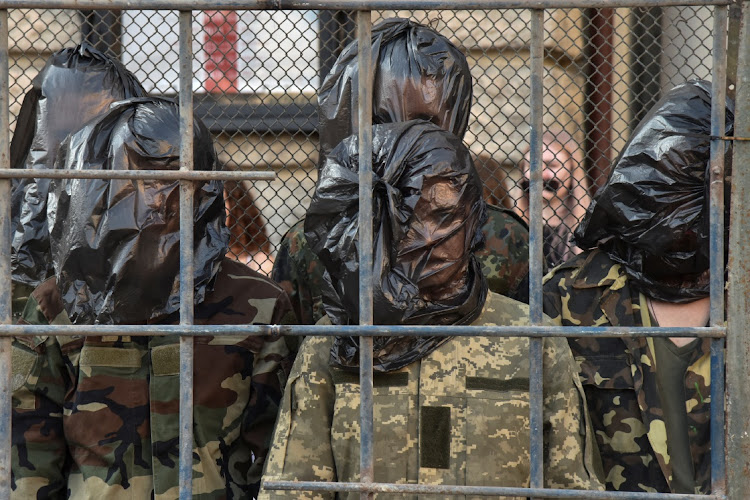 Participants stage a performance during a rally of relatives and friends of defenders of the Azovstal Iron and Steel Works in Mariupol, demanding to recognise Russia as a state sponsor of terrorism after killing Ukrainian prisoners of war (POWs) in a prison in Olenivka, outside of Donetsk, as Russia's attack on Ukraine continues, in Kyiv, Ukraine August 5, 2022.
Image: REUTERS/Pavlo Palamarchuk

Russia's war in Ukraine is about to enter a new phase, with most fighting shifting to a nearly 350 kilometre (217 mile) front stretching southwest from near Zaporizhzhia to Kherson, parallel to the Dnieper River, British military intelligence said on Saturday.

Russian forces are almost certainly amassing in the south of Ukraine, anticipating a counter-offensive or in preparation for a possible assault, the UK's Ministry of Defence said on Twitter.

Long convoys of Russian military trucks, tanks, towed artillery and other weapons continue to move away from Ukraine's Donbas region and are headed southwest.

Battalion tactical groups (BTG), which comprise between 800 and 1,000 troops, have been deployed to Crimea and would almost certainly be used to support Russian troops in the Kherson region, the update said.

Ukraine's forces are focusing their targeting on bridges, ammunition depots, rail links with growing frequency in its southern regions, including the strategically important railroad spur that links Kherson to Russian-occupied Crimea, it said.

The Moscow Exchange on Friday said it would not be able to meet a promise to allow access to its stock market next week to clients from "friendly" jurisdictions, those which have not deployed sanctions against Russia.

In July, the exchange said non-residents from countries that have not imposed sanctions would be permitted to trade on its stock and derivatives markets from Aug. 8.But in a statement issued late on Friday, the exchange said it needed more time to prepare for access to the stock market.

It cited a decree signed earlier in the day by President Vladimir Putin, which banned investors from so-called unfriendly countries from selling shares in key energy projects and banks until the end of the year.

Non-resident investors from friendly nations should be able to trade on the derivatives market from Aug. 8, it added.