White children grow up with the idea that black people cannot do anything sophisticated, ANC Youth League president Julius Malema said on Thursday. 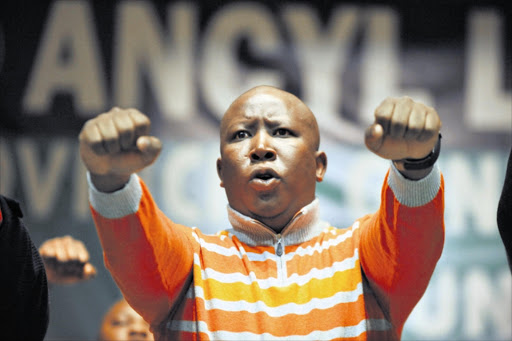 White children grow up with the idea that black people cannot do anything sophisticated, ANC Youth League president Julius Malema said on Thursday.

Tabling his political report at the Youth League conference in Midrand he said the first interaction a white child had with a black person was when the black person was a domestic worker or a gardener, who were referred to as "the girl or "the boy."

"The second interaction is when a white child meets a black person at a street corner begging," he said.

He said the former apartheid regime had managed to inculcate the racist ideology within the white community.

"Those who have benefited from apartheid cry foul when we call for affirmative action, they think we are denying them jobs," he said.

Malema also used the opportunity to dismiss suggestions that the league's "outbursts" had driven away white votes from the ANC.

"This is an uninformed analysis," he said.

He explained that the Youth League was playing the role it used to play when the league was led by Nelson Mandela.

He questioned why the majority of black people owned little land while the majority of land was in the hands of the white minority. The 1948 founding documents of the ANCYL had declared that the land should be redistributed to the majority.

"The land question must be resolved, if needs be the hard way," he said , quoting ANC leader O R Tambo.

He said the ANC had tried for the past 17 years to reform the land issue through the willing seller/willing buyer approach - which had failed.

"The only option is to take the land without compensation, if you refuse to give us an alternative," he said to the applause of the delegates.

Malema in the report also highlighted that economic opportunities should be made for the youth, but not compromising the quality of the end product.

"Economic freedom means we must be educated, free education must be a reality. It should not be in the budget speech year in and year out," he said.

Taking a swipe at the SA Communist Party without mentioning a name, he said the organisation of Moses Kotane had turned out to be a losing group within the ANC.

"It is preoccupied with who became a mayor, councillor or a secretary."

"An ANC-led municipality in the Free State built toilets without enclosures and the ANC was not aware of such incidents," he said, highlighting this as an example.

Young people should brace themselves to take up positions within the ANC.

"The time is right for young people to occupy leadership positions within the ANC."

Malema concluded the report by singing the controversial song Dubula ibhunu, whose lyrics have been translated as "shoot the boer".