I was abandoned to assassins: Malema 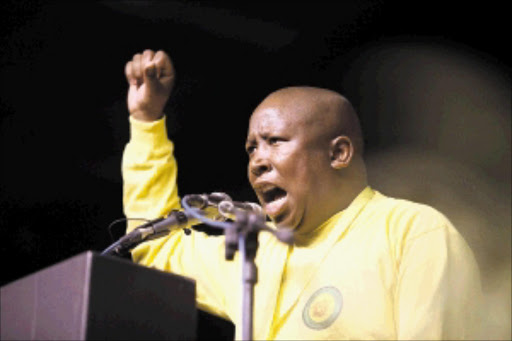 ANC Youth League president Julius Malema has an axe to grind with leaders in President Jacob Zuma's government whom he believes deliberately exposed him to death when they withdraw his personal security guards for what he believes were political reasons.

Confident from his uncontested re-election as leader of the league for another three years, Malema told delegates at the closing yesterday of the league's national congress in Midrand, Johannesburg, that the guards assigned to him after he was threatened that his house would be bombed were abruptly recalled without his being told.

He said he believed the bodyguards were withdrawn because some leaders in the government had been irritated by his views about racial minorities handing over power to blacks.

"The government and the ANC gave me protectors because they thought my life was in danger. As we were going on with the programme of engaging our people in the economic struggle, our government withdrew security from me on bases that were unfounded.

"They just said they conducted a study and that I was no longer under threat and therefore I did not need to be protected. I had no reason to worry because I am not the first one. They can do that. If that makes them sleep at night, it's fine," Malema said.

He said that two of the guards assigned to protect him refused to follow orders to dump him.

Malema warned yesterday that "karma" would deal with those who made the decision to withdraw his security when he needed it most.

"[The two bodyguards] pleaded with their boss to say 'Let us take him to work and we will tell him later that we are no longer with him'. They were told to 'leave that man and that is an instruction'. They said they would 'protect this man with or without you'," Malema said.

"I know that even the posture that people may take regarding the youth league is very problematic. They will leave those positions. They come and go and one day they will be walking without protectors and all the benefits they have.

"We are not bitter about anything. Let them continue treating people the same way they do, there is absolutely no problem. Everybody will have his turn in life. This is our turn to be treated like this, it is no problem.

"I am fine. I do not need those police any more - not now, not ever.

"Whether my life can get taken away or not, it is a cheap life. It is a life of a child of a single mother; it's not worth being protected by the police. You can take it away. Any time you want to take this life away, you can take it away.

"I am not scared of anything or anybody, and nobody is going to threaten me."

Earlier, Malema blasted ANC leaders in Mpumalanga and KwaZulu-Natal for offering bribes and for telling youth league delegate's to the congress from those provinces to vote against him.

Malema said that he would report these leaders to the ANC and that action should be taken against them.

He called for the ousting of Mpumalanga Premier David Mabuza for his alleged involvement in the moves against him.

The youth league leader told delegates that the league should intensify its struggle to attain economic freedom and that the expropriation of land without compensation from "criminals" [whites] who stole the land from blacks was non-negotiable.

"[ANC leaders] say we should not say that land was stolen [from blacks] but they are the ones who told us that.

"When you steal you are a criminal and should be treated as such.

"The real enemy is white capital. They are the ones we are fighting against. Those are the people we want to take from and give to the majority. It's not racism, it is written in every document of the ANC," Malema said.

He said that the league would support only those leaders who agreed with its policy proposals when it came to leadership elections at the ANC national congress next year.

"We are going forward and there is nobody going to stand in [front] of this moving train of economic freedom fighters.

"The leadership of the ANC should lead us. We are asking for radical policy shift. We want more action.

"We need courageous men and women who have the political will to change the lives of our people," Malema said.