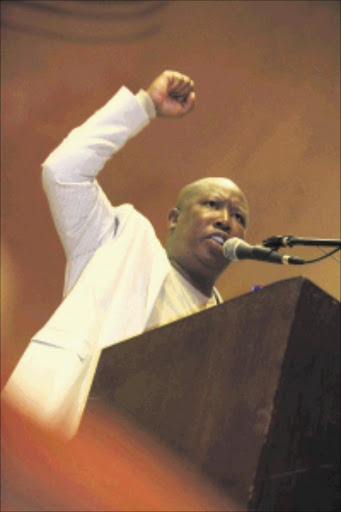 Julius Malema has come out of his shell to say "illiterate and uneducated" journalists could not reach the standards of the ANC Youth League .

The league president was speaking publicly for the first time since last week's City Press report in which it was alleged that a businessman had paid money into his trust fund after securing government tenders.

The newspaper report intimated that Malema used the trust fund to bankroll his lavish lifestyle.

Malema yesterday spoke to a crowd at Queenstown Magistrate's Court, where the case is being heard of Gerdus Greyvenstein, alleged to have shot Siyambonga Ndabeni three times in the chest in a racially fuelled argument about Malema.

Malema said: "How many leaders have trust funds? Look at Tokyo [Sexwale] and his millions. This [trust] account helps the poor.

"If someone gave me a bribe, where is the receipt? There must be paper trail...you can trace that money," he said.

Referring to City Press's anonymous source, who claimed to have paid money into his family trust, Malema said: "If there is a baboon, come explain yourself, you coward.

"You don't have a face, you bloody ape. I will explain where you can put your money and it will be stinking money.

"What type of an irresponsible person would I be to link my son and grandmother's name to illegal activities?"

He castigated DA leader and Western Cape Premier Helen Zille and her party, saying: "Driving a Corolla does not make you [a] politician. They are fake...what does that mean...down with Helen Zille...fools can't speak politics."

The firebrand reiterated his position on nationalising mines: "We are looking for economic freedom and an end to poverty. By nationalising the mines we will do this."

Malema said the "willing buyer, willing seller" concept had to be thrown out of the window.

"They [white people] must pay for making us slaves . we must punish them. And now they must pay. If we don't, we are paying them for calling us k*****s," he said.

"They must appreciate the fact that we have forgiven them, but must know we will never forget."

Turning to the media, he said: "Since I have become the youth league president, I have received no peace. If I go to the toilet they [the media] follow me. They say 'He went to the toilet but he didn't s**t'.

"Small minds that discuss people and not issues suffer from the mind of a rat. Illiterate, uneducated journalists are unable to reach youth league standards."