Malema on the ropes 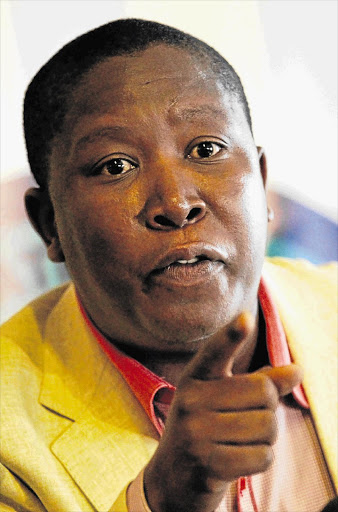 Top ANC and government officials will demand that tough action be taken against the ANC Youth League at a meeting on Monday.

At Monday's session, the ANC heavyweights are expected to question Malema about a series of statements he made about supporting "forces" in Botswana to unseat that country's ruling party, headed by President Ian Khama.

The youth league also described the Botswana Democratic Party as a "security threat to Africa".

Zuma's international relations adviser, Lindiwe Zulu, told the Sunday Times that the ANC had to act against Malema if it was to regain the respect of neighbouring countries.

She said: "I was in Zimbabwe not so long ago and people there were saying: 'What's wrong with you? What's happening? Tell us whether the youth league is the one in charge so that we can talk to the youth league and not you.' You don't like getting to places and getting such statements.

"I feel they should be disciplined. We can't keep talking about this discipline in corners ... there were issues that the ANC agreed upon in as far as comrade Malema is concerned. I sit here and ask myself: 'Where is that process? Does (Malema) really understand the impact of some of his utterances?'" Zulu said.

The Sunday Times has established that Luthuli House was inundated with complaints from its structures after the league made the statement.

Pallo Jordan, who is a member of the ANC's national executive committee, said the ruling party was right to slam the league's statements.

When asked if ANC veterans should not be advising the league to tone down its rhetoric, he said: "You can only be a voice of reason to people who are reasonable."

But the top brass are likely to face resistance from a stubborn ANCYL national executive committee, whose members are saying that tomorrow's meeting should be confined to the induction of the new officials - and that political differences should not be discussed.

This week Mantashe suggested that disciplinary action could be taken as the league had "transgressed" party policy.

He told the Sunday Times: "How we deal with transgressions is clear in the constitution ... obviously in the meeting on Monday, we will discuss it."

"When you begin to attack a neighbouring country... it's more serious than meets the eye because you complicate the party-to-party relations ... you also complicate diplomatic relations," Mantashe said.

ANC leaders perceive the league's utterances as part of a campaign to embarrass and undermine Zuma's leadership ahead of next year's crucial ruling party national conference.

But despite threats of discipline, Malema has remained defiant, telling a youth league gathering on Thursday evening that its position on Botswana did not contradict ANC policy.

He said: "The ANC Youth League reaffirms the position of the ANC that they will never struggle for a regime change in any government.

"But we will openly associate with political parties that shape ideological outlooks with us."

The league was unhappy with the ANC's public rebuke, arguing that the ruling party should first have spoken to its leaders privately before issuing a statement.

But Mantashe said the "top-six" did call in the league's new secretary-general, Sindiso Magaqa, on Monday to tell him that a statement would be issued.

Magaqa hit back, however, saying the ANCYL would have expected a copy of the statement before it was disseminated - and that party bosses should have issued the communiqué in their names and not in the name of ANC spokesman Jackson Mthembu.

The youth league's secretary-general said: "I was told about the statement. I never saw any statement ... Jackson is not the officials; the statement from Jackson we don't know because we never saw it."

The showdown between the ruling party and its errant youth league comes in the same week that cabinet ministers - like the Minister of Public Enterprises, Malusi Gigaba, and the Minister of Mining, Susan Shabangu, criticised the league's views on nationalisation.

Gigaba said the "reckless" debate on nationalisation was deterring investment.

Shabangu also questioned why the league focused only on nationalisation when it alone was not enough to cure the ills of society.

The league responded by accusing Gigaba of pandering to the whims of "imperialists".

Gigaba said: "I think we have arrived at a point where the ANC leadership needs to take a stand about how these issues are being handled in public."