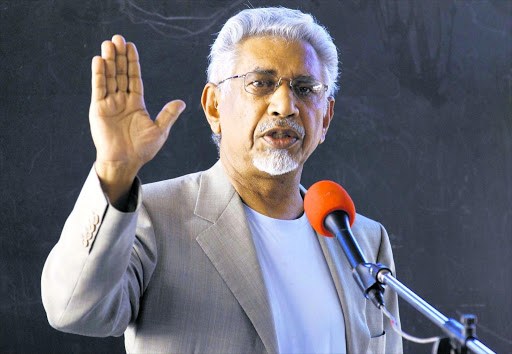 Presidential spokesman Mac Maharaj said the Democratic Alliance is "reducing the fight against corruption to a political party game".

The DA lodged the complaints in Cape Town over R1.78-billion in "dodgy" leases of buildings for police headquarters in Pretoria and Durban. Public Protector Thuli Madonsela investigated and issued reports in February and last month. Madonsela found the leases were improper and unlawful.

DA federal chairman James Wilmot said his party was concerned about President Jacob Zuma's lack of decisiveness and leadership on the issue and questioned if he had the will to fight graft.

Maharaj hit back saying: "It's a great pity that they didn't check their facts and rushed for publicity. To have expected a kneejerk response would have done a great injustice to the reports and the office of the president.

"The president's statement to media owners on Friday shows that he is systematically attacking the problem of corruption.

"In the past financial year, he had issued no less than 18 proclamations authorising the Special Investigating Unit to probe cases of corruption . if we are serious about the fight against corruption we should take note of what is being done."

The DA wanted Madonsela to spend time in court instead of dealing with real issues, he said. "It is deflecting attention from the real issues."

James said: "We have waited for the president to take appropriate action, but after a long silence all that has been forthcoming was an announcement that he would submit his 'preliminary response' to the National Assembly next Friday and that he believes there are 'some aspects that . need further clarity'."

"The response of the president is with the speaker, let us hear from the speaker. It's up to the speaker what to do with it. The speaker will make it public." Zuma had asked those involved for further information.

The Sunday Independent yesterday quoted Madonsela's spokesman, Kgalalelo Masibi, as saying: "The president has affirmed the report and accepts the findings and request for remedial action."