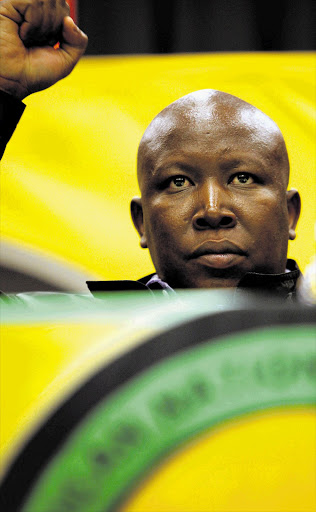 Julius Malema was paid R1.2-million by businessman Steve Bosch who scored tenders worth tens of millions of rands in Limpopo.

This is the first proof to emerge confirming that tenderpreneurs in Malema's home province finance the ANC Youth League leader's lavish lifestyle, adding fuel to claims that he assists them in scoring government business.

The Sunday Times can today reveal that Bosch's company, Sizani Build It, made at least two payments from its Standard Bank account - and on behalf of Malema - to an Investec bank account belonging to Aurielo Cimato, the architect building Malema's multimillion-rand house in Sandton.

The first R900000 was deposited on March 4 this year, and another R300 000 on June 4. "J Malema" is listed as the beneficiary reference for the payment - with the bank sending payment confirmations to Malema that same day via sms.

It remains unclear how many other payments Bosch, who was a founding member of the Polokwane branch of the ANC Youth League in 1995, might have made for Malema.

When contacted for comment Malema denied receiving any benefit from Bosch, saying he "can't be answering for other people".

Malema added: "There is no money that came to me or any of my entities."

Bosch's company has scored a number of plum government tenders from Limpopo - tenders over which Malema's Ratanang Trust has influence.

Ratanang Trust is a shareholder in On-Point, a company which provides advice on tenders doled out by Limpopo's Department of Roads and Transport, to which he admitted in the Mail & Guardian newspaper.

Bosch's Sizani Build It has won tenders from that department, mostly recently on July 14.

When asked why Bosch appeared to be picking up the tab for his house, Malema said: "I don't know how Bosch conducts his transactions, I don't know if Bosch gets business from On-Point, I know nothing."

He referred all questions to Bosch, adding: "I don't care whether he answers you or not, it's none of my f**king business!"

Bosch refused to explain the payments, saying "the only payments made to Cimato is for my private business dealings with him".

The Polokwane businessman also refused to say why Malema was listed as the "beneficiary reference" for the payment, or why Sizani Build It's bank sent smses to Malema confirming payments.

Initially, Bosch denied that any sms confirmations were sent to Malema, then asked: "Do you know how many Malemas are here in Polokwane and Botswana?"

He would not reveal who the other "J Malema" might be, and said the transfers to Cimato remained "private and confidential".

He refused to say whether he had made any other payments to Malema, saying this was "a fishing expedition" that he "would not dignify" with an answer.

When contacted in Italy, Cimato said he was "not interested" in discussing Malema with the Sunday Times.

He referr ed queries to his business partner, Adriano Moraldo, and ignored all further questions and smses from the Sunday Times.

Moraldo said he did not know Bosch, nor was he aware of any payment made by him to Cimato. "It must be a private thing," he said.

Notable among Bosch's tenders was a R41.3-million deal awarded in October last year to build RDP housing in the province. Sizani Build It was the main contractor in this deal.

He scored other tenders, including a building supply deal in July from the department of roads - two months after his registration from the construction board had expired.

Bosch did reveal that he had made donations to Malema's Ratanang Trust. He said he "pledged both money and building materials" to Ratanang "after it had made out a case for such donations". The donated goods and money were used to build a Baptist church in 2009.

Sizani Build It also donated cash and building materials to the Jacob Zuma Education Trust in 2007, when it launched in Limpopo.

If it is proved that Malema had a hand in directing the awarding of tenders in the province, the youth leader could face prosecution under the Prevention and Combating of Corrupt Activities Act.

Professor Raylene Keightley, director of the University of the Witwatersrand's Centre for Applied Legal Studies, said police could investigate anyone who received gifts for influencing the awarding of government tenders - a crime, in terms of the act.

"You don't even have to actually receive the tender. Police can investigate as long as you attempt to influence the award," she said.

Keightley said the benefit need not be cash - it could be giving someone an airplane ride in the expectations of receiving favourable treatment.

"A person need not even be employed by government. They need just be in a position to influence the award of a tender, whether directly or indirectly" she said.