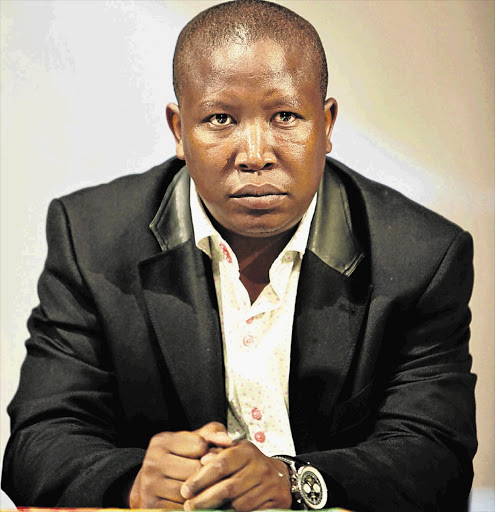 A defiant ANC Youth League dug in its heels and declared that it will bring Johannesburg to a standstill when Julius Malema appears before an ANC disciplinary committee next week.

According to at least three members of the league who attended a special meeting of its national executive committeeto discuss the ruling party's action against their leader, a decision was taken to bus thousands of members from all provinces to support Malema and league spokesman Floyd Shivambu when they appear before the disciplinary committee.

Malema and Shivambu were on Friday charged by the ANC with bringing the party into disrepute.

"The ANC Youth League special NEC [meeting] reaffirmed its total support for the leadership of the ANC Youth League and [is] convinced that the issues contained in the charges are political issues, which require discussion in the structures of the ANC," said the league.

It said it would always subject itself to the disciplines and policies of the ANC.

The league will ask the ruling party for an urgent meeting in which it intends arguing that the controversy over Malema's "misconduct" could have been resolved through discussion.

The Times has established that the league has also resolved to insist on its entire executive being charged.

The league is also expected to write to the ANC challenging the impartiality of some members of the disciplinary committee, including Mineral Resources Minister Susan Shabangu and Science and Technology Deputy Minister Derek Hanekom.

As the league put together its battle plan, the ANC held its national executive committee meeting in which issues of discipline took centre stage.

On Friday, the ANC charged Malema with "sowing divisions" in its ranks and bringing the ruling party into disrepute.

Last month, Malema said the youth league would establish a "command team" to work towards a united opposition against the "puppet regime" of President Ian Khama and his ruling Botswana Democratic Party.

The ANC publicly rebuked the league, but Malema and his executive stood their ground, saying their statements on Botswana were not against party policy.

They later issued an apology.

Political analyst Steven Friedman said Malema's woes could signal the beginning of the end of his political career.

"We may be beginning to reach a stage where the people who find him useful no longer find him useful. The kind of protection he enjoyed may be wearing thin.

"He has kept going because people in the national working committee found him useful," Friedman said.

"In the end, his financial dealings may be the last straw.

"People will start questioning his extravagance."

As political pressure continues against Malema, he also has to deal with investigations into his business dealings by the public protector and Hawks.

Public Protector Thuli Madonsela said she would investigate the awarding of tenders by the Limpopo government to On-Point Engineering, a company linked to Malema.

On Saturday, the Hawks announced it had launched a full investigation into his financial dealings, the Ratanang family trust and companies linked to him.

If the ANC finds Malema guilty, he faces expulsion or suspension from the party.

If he is suspended, it will derail the youth league's plans to have President Jacob Zuma removed as party leader and secretary-general Gwede Mantashe replaced by former league leader Fikile Mbalula at the ANC national conference in Mangaung next year.

The youth league last week said it would organise marches to the JSE, Chamber of Mines and Union Buildings to demand "economic freedom".

This will be the second time that Malema has to face an ANC disciplinary committee .

Last year, he was forced to make a public apology following a trip to Zimbabwe during which he declared the ANC's support for President Robert Mugabe.

His comments were made during mediation efforts by Zuma to heal rifts within Zimbabwe's government of national unity. - Additional reporting by Sipho Masondo