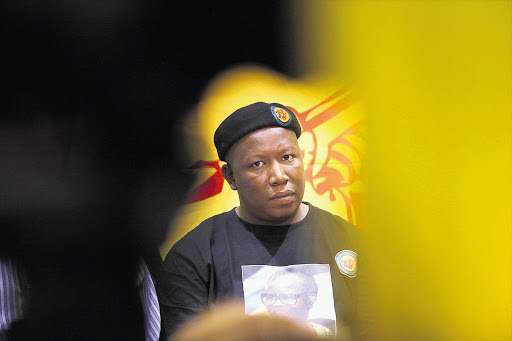 Pandemonium has broke out at the ANC's eThekwini regional offices in Durban when a handful of ANC Youth League protesters opposed to Julius Malema tried to storm the league's regional general council meeting.

Trouble started when regional youth league leaders allowed only chairmen and secretaries into the closed meeting. Incensed youth league members claimed they had been invited to attend and expressed outrage that they had been locked out.

As the regional youth league leaders were about to start the meeting, the protesters started singing songs in support of President Jacob Zuma. They also chanted slogans branding Malema a "gangster" and isibhanxa, a Xhosa word for a fool.

Moments after the meeting started, the disaffected members tried to push their way in. Heavily armed security guards used tear gas to disperse them.

On Sunday, the youth league suspended and laid disciplinary charges against its KwaZulu-Natal provincial leadership, which is known to support Zuma. The suspension is widely believed to be linked to the ANC's decision to bring disciplinary charges against Malema. His supporters say it is a deliberate strategy to clip Malema's wings ahead of the ruling party's elective conference next year.

"We know that what happened to you was brutal. But you must know that these are trying times for the youth league and the ANC. There are people who think they are bigger than the organisation."

Suspended provincial chairman Mthandeni Dlungwane told supporters that the ANC's provincial leadership had called "for us to remain united". .