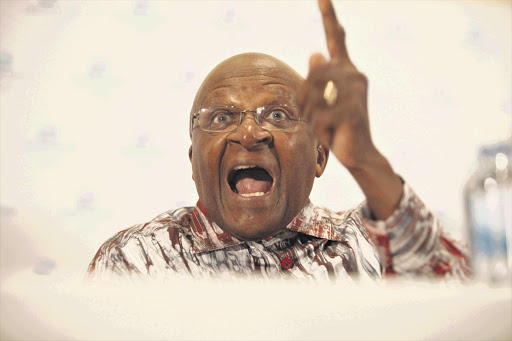 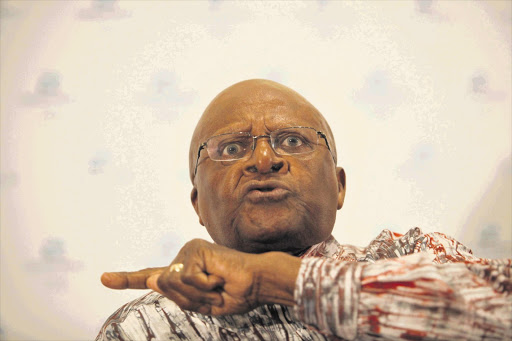 Archbishop Emeritus Desmond Tutu has launched a blistering attack on President Jacob Zuma's government, saying he would go as far as praying for the ANC's demise.

Yesterday, two days before Tutu's 80th birthday, the Dalai Lama - who first applied in June for a visa to visit South Africa - withdrew his application because he did "not want to create any inconvenience to anyone, individuals or governments," his office said.

Included in the Tibetan leader's South African itinerary was delivering the inaugural Desmond Tutu International Peace Lecture at the University of the Western Cape.

The Times has learnt reliably that the government was to inform him yesterday that his application had been denied.

This is the second time in two years that the Dalai Lama, a Nobel Peace Prize laureate, has been refused entry into the country.

The Times understands that the Department of Home Affairs tried to advise the Department of International Relations and Co-operation on how to deal with the Buddhist leader's visa application, as Home Affairs Minister Nkosazana Dlamini-Zuma is a former minister of foreign affairs and presided over the refusal of his visa in 2009.

Home Affairs sought a meeting with the Presidency and the International Relations and Co-operation Department on the matter but the meeting never took place.

At a press conference called by the Desmond Tutu Peace Centre late yesterday afternoon, Tutu sent shivers through the audience.

"The trouble I think is that the ANC reckons that the freedom that we enjoy is due to them. They reckon everyone else is just a sideline," he said.

Tutu, who shouted and wagged a finger as he spoke, said Zuma did not represent him.

"Hey Mr Zuma, you and your government don't represent me. You represent your own interests."

The retired archbishop spoke of how disgusted he had been when he had sat in parliament during Zuma's state of the nation address, listening to "this president of ours" failing to pay tribute to the religious leaders who helped in the fight against apartheid.

He reminded the gathering that it was religious leaders who in 1989 organised 30000 people to march against oppression.

"Let the ANC know that they cannot airbrush us out," he said.

ANC spokesman Jackson Mthembu said last night: "We are appealing to the archbishop to calm down and work together with the ANC and its government, first, on the Dalai Lama issue and, second, we appeal to the archbishop not to pray for the demise of the ANC-led government, but instead to work together with the ANC and pray for the ANC-led government to deliver a better life for all the people of South Africa.''

Earlier yesterday, International Relations spokesman Clayson Monyela said the authorities had been processing the Dalai Lama's visa application when the South African High Commissioner's office in New Delhi received a statement from the Tibetan spiritual leader saying he was cancelling his trip.

"We have not denied him a visa. There was no refusal by the South African government to grant him a visa. He has, for the reasons he has expressed in the statement, decided to cancel the trip when the process was still under way," said Monyela.

"There is no country in the world that can process a visa without the original passport," he said.

Ntsebeza said he had written to the Deputy Minister of International Relations, Ebrahim Ebrahim, and contacted the director-general of the Department of Home Affairs, Mkhuseli Apleni, and even Dlamini-Zuma.

Wits University has organised a march of protest at the government's "silencing [of] the voice of His Holiness the Dalai Lama".

Vice-Chancellor Loyiso Nongxa said: "The university condemns the state for once again not granting a visa for this stalwart of peace to enter our country."

Matthew McDonald, a research analyst for the Centre for Chinese Studies at the University of Stellenbosch, said the issue had escalated "beyond proportion".

"There is now suspicion about Chinese pressure, even if we don't know if there was any in this case. There are questions around the declared value basis of South Africa's foreign policy - and a question about how sovereign South Africa is in its decisions. There is an unhappy civil society ." he said.

Paul Graham, executive director of Idasa, said it was difficult to understand why the government had not granted a "tourist visa".

"Of course visas are always at the discretion of the state to whom an application is made, but on the assumption that a correct and timely application was made, a refusal must inevitably raise questions about whether the decision was influenced by a wish not to offend a critical trading partner," he said.