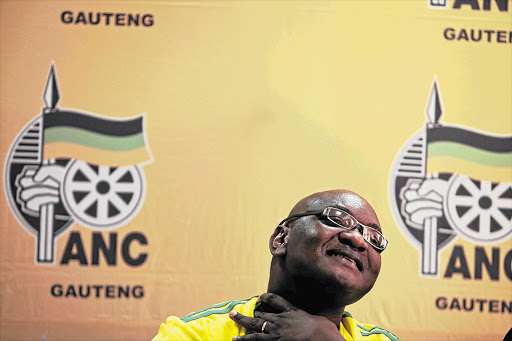 Proceeds of cash-in-transit robberies are being used to fund factional battles in the ruling party, the ANC in Gauteng has warned.

ANC provincial secretary David Makhura said the party was worried that proceeds from crime were being used to sow divisions and anarchy in party ranks.

Speaking to journalists in Johannesburg, Makhura said a "notorious gang of anarchists" was trying to hijack the ANC to further a factional agenda.

"They have lots of money and we don't know where it comes from. We suspect that they have dirty money."

There was particular concern about the use of heist money in Tshwane.

His accusations were made only a few weeks after ANC secretary-general Gwede Mantashe warned members of the party's national executive committee of deep divisions in the party. He said the ANC would celebrate its 100th year more divided than in 2007.

Factional battles have come to prominence in recent months with party members divided over whether President Jacob Zuma should serve another term as ANC president.

Makhura added fire to the debate with his accusations yesterday.

He accused Mafika Mahlangu of being the leader of the "anarchist" group with links to heist gangs.

Mahlangu, Chauke and others were arrested after a R12-million robbery in 1997 at the premises of a security company in Pretoria. However, Mahlangu was acquitted.

Last week, he was elected chairman of the Tshwane region of the ANC at a meeting convened by his grouping in parallel with the official ANC meeting. The ANC in Gauteng said yesterday that he and other leaders of his faction had been suspended and would be called to a disciplinary hearing.

"We are not going to be blackmailed by anarchists. We will not allow them to destroy the ANC," Makhura said.

"Mafika is the brains behind this disruption."

Makhura said the parallel meeting last week was organised by a notorious gang of anarchists, most of whom faced disciplinary action.

"They are armed and some of them were involved in heists," Makhura said.

He said the Gauteng ANC had told Mantashe of the "drastic actions" it was taking to restore order to the party's Tshwane region.

Mahlangu could not be reached for comment. But Joel Mphahla, one of the six members suspended with Mahlangu, said last night they could not deal with suspicions.

"Makhura should go and lay a charge because we can't clear this thing; it will keep on hanging with suspicion," he said.

"I didn't expect Makhura to actually labour under suspicion.

"To me, he is senior and mature enough to actually start dealing with issues rather than suspicions."

Madonsela is investigating the claim.

Makhura said the ANC was worried about dubious members using money to get elected. "You don't know how worried the ANC is about dirty money, every conference has money hanging around.''

Despite a clampdown by the ruling on the leadership succession debate, intense lobbying and discussion is in full swing among ANC structures.