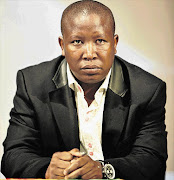 The ANC Youth League has been thrown into turmoil - its president, Julius Malema, lying in hospital a day before his disciplinary hearing.

Adding to the tension were claims by youth league secretary-general Sindiso Magaqa that he had received death threats.

A senior doctor yesterday confirmed that Malema had been admitted to ward F at a Polokwane private hospital.

Patients with conditions such as stress, high blood pressure and chest problems are usually treated in this ward.

Malema reportedly told a public meeting on Tuesday at the University of Polokwane - where he delivered the Oliver Tambo Memorial Lecture - that he had flu.

It is understood that the ANC's disciplinary committee will resume its hearings in his absence to avoid drawing out the proceedings.

Malema's lawyers are expected to list for the committee the witnesses they intended calling.

"We strongly believe that his health is a private matter and should be treated as such," spokesman Floyd Shivambu said.

Derek Hanekom, chairman of the disciplinary committee, yesterday said the committee expected Malema's lawyers to hand over a "proper report" on his health.

"We'll consider what the implications are on the continuation of the hearing," he said.

Magaqa said the death threats were received after the controversial disbanding of the youth league's KwaZulu-Natal executive committee.

He lambasted the disbanded provincial executive committee for sowing divisions in the ANC by introducing "tribalism".

"[Suspended chairman] Mthan-deni Dlungwane, in particular, is behind mobilising for tribalism in the ANC," he said.

But Dlungwane rubbished Magaqa's claims, saying tribalism in the ANC was defeated in 1912.

Malema was charged with sowing division and bringing the ANC into disrepute. He also faces a charge of misconduct along with Shivambu, Magaqa, league deputy president Ronald Lamola, treasurer-general Pule Mabe and deputy secretary-general Kenetswe Masenogi.

Today's testimony was expected to deal with charges specific to Malema's case.

Human Settlements Minister Tokyo Sexwale was due to testify on the youth leader's behalf.

Business Day reported that Sexwale warned the ANC not to use the hearing as a means of settling political scores.

Malema supporters have consistently argued that the charges against him are an attempt to have him removed from office before the ANC's 2012 national elective conference.