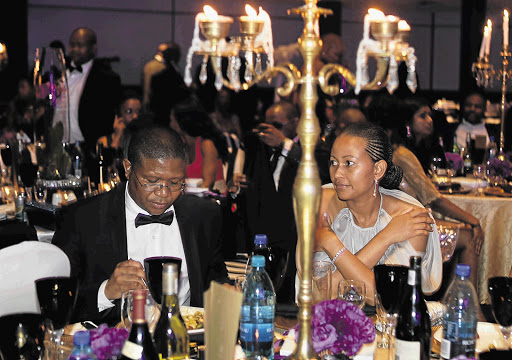 Sports Minister Fikile Mbalula's "razzmatazz" birthday weekend celebrations ended on a sour note yesterday when he had to apologise to his wife for his philandering ways.

"I have apologised to my family, particularly to my wife, as I should have known better," Mbalula said in a statement yesterday.

He added: "I have been trying to deal with this matter, in a private manner, for the past three months and when it became clear to me that this woman was prepared to extort money from me, I then decided to cease all communication with her as I was not prepared to be blackmailed."

On Saturday, Mbalula's lawyer Themba Langa sent a response to City Press in which he referred to Molamu as an "extortionist" seven times, and accusing it and other newspapers of relying on "untested and baseless allegations".

Langa was quoted as saying: "It is false and defamatory for the extortionist to allege that she had a sexual encounter with our client, and City Press cannot become a source of publication to such spurious and false allegations".

But, eventually, Mbalula was forced into the apology after weekend newspapers splashed details of his romps with Molamu - despite first denying knowing who she was.

It was reported yesterday that Mbalula had had unprotected sex with Molamu on "at least two occasions in August".

Mbalula said he had given Molamu R10000 for an abortion, but that she later asked for R40000 - and threatened to go public if he didn't pay up.

In the statement yesterday, Mbalula said Molamu had still not provided any evidence that she was pregnant.

"Her claims of being pregnant remain unproven to me," he said.

He seemed eager to put the matter to bed, saying he wanted to save his family from media speculation, and would not lay a complaint of "extortion or blackmail".

Mbalula also apologised to the country, government and the ANC. He asked for his family to be given "time and space" to deal with the matter privately.

In what seems to be a growing trend, Mbalula is the latest in a line of ANC politicians to apologise to the nation for their less-than-exemplary behaviour.

Five years ago, after being acquitted of rape, then axed deputy president Jacob Zuma apologised to the nation for not wearing a condom during sex with the HIV-positive woman who had laid the complaint against him.

Last February, he again apologised - this time for "the pain" he'd caused by having an extra-marital relationship with Sonono Khoza - the mother of his 20th child.

Just one month after that, ANC spokesman Jackson Mthembu made a public apology to the nation after he was convicted of drunken driving.

Unathi Kondile tweeted: "One can conclude Zizi Kodwa doesn't like Fikile Mbalula. A gentleman always warns another about window-breaking/tyre-slasher exs."

Jacques Rousseau agreed with Mdungwa, saying: "Quite surprised to find that knowing Mbalula is an unfaithful husband is in my (ie the public) interest."

Zama Ndlovu sympathised with Mbalula's wife, Nozuko, saying: "The whole day I've been thinking: 'I hope Mrs Mbalula gets herself tested.' Married people are so vulnerable to HIV."

Shiraz Makadam: "I just can't see how the Mbalula story is of any news benefit to SA. This will only create more animosity between ANC & media."

What Mbalula and Molamu said in texts:

Molamu: "Gettin out of you life wit pleasure, gvn u back yo R10k with pleasure. But I'm keeping my child, I'll survive! I dnt wana speak to u anymr."

Mbalula: "U go around sleeping with everyone without a condom spreading aids, then u want sympathy go to hell u such a cheap free loadder... u act tramatise yet u were not when u were forcing yself to a married men."