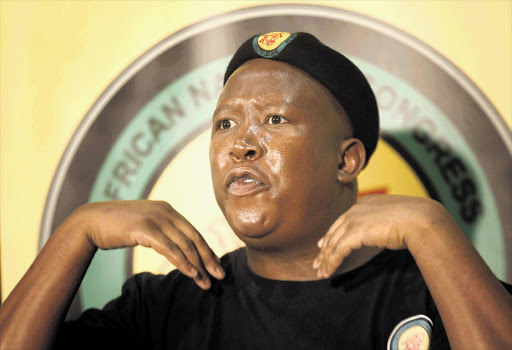 Julius Malema believes he has punched holes in the ANC's disciplinary case against him and has vowed to fight to the bitter end.

He challenged the ANC to fire him because, he said, he had no intention of resigning.

Malema's membership of the party was suspended for five years and his top executives got suspended sentences pending their appeal.

Yesterday, Malema and his executives turned the tables and accused senior ANC leaders of using the national disciplinary committee as a platform "to settle political scores", for "personal problems" and "to stifle debate".

They questioned the legitimacy of the hearings.

ANC secretary-general Gwede Mantashe and disciplinary committee chairman Derek Hanekom were singled out. Mantashe was accused of masterminding the charges against the youth league leadership; Hanekom of pursuing a political agenda.

"A decision to convict and sanction the ANC Youth League leadership was taken by the secretary-general, who made his intentions clear in all his statements."

Malema said that during the disciplinary hearings Hanekom had failed to control his temper.

He said the committee was convened "merely" to give his conviction legitimacy.

But the ANC yesterday rejected the claims and said issues raised by the youth league should be taken to its appeals committee.

Malema's accusations were made as the ANC leadership race is hotting up. Youth League structures are pushing behind the scenes for Zuma to be replaced by his deputy, Kgalema Motlanthe, and for their former president, Fikile Mbalula, to replace Mantashe as secretary-general next year.

In their defence yesterday, Malema and his executives said the ANC's national officials, led by Zuma, were not empowered by the party's constitution to institute disciplinary charges against them, and that they should have allowed the party's national executive committee to prefer the charges.

But the ANC yesterday said its constitution fully empowered its national officials to prefer charges against any member.

Malema said Hanekom had used an outdated youth league constitution to effect his removal from office.

He said a new constitution, which was amended at the youth league's national conference, in June, gives his national executive committee the right to subject a ruling party conviction to a youth league inquiry.

But senior ANC leaders who spoke to The Times rejected Malema's stance.

"If we use [Malema's] logic it will mean that a magistrate's court can overrule the Constitutional Court. It cannot be like that. That amendment they made is invalid," said a senior party official last night.

Malema said that, despite his conviction, he will not give up the helm of the youth league. He said the ANC did not have the power to suspend him and he would appeal.

Malema questioned the composition of the national disciplinary committee, and accused Collins Chabane, Susan Shabangu and Hanekom of conflict of interest. He said they had expressed views against the youth league's campaigns for the nationalisation of mines and land expropriation.

"Hanekom is recorded as having publicly said that one of the policy positions of the ANC Youth League on expropriation of land without compensation will not happen as long as he is in the ANC," Malema said.

He warned that if ANC leaders were allowed to use the party's constitution to solve personal problems, then the party would be in danger of disintegrating.

As the battle between the ANC and its youth wing continues, ANC Gauteng chairman and Arts and Culture Minister Paul Mashatile yesterday conceded that the ruling party had "enormous" challenges.

Mashatile threw down the gauntlet, saying that the ANC was "going through a lot of challenges", and intimating that the organisation was at a crossroads.

Referring to the youth league's war with the ANC's leaders, Mashatile said Albert Luthuli would not have allowed such "shenanigans".

"He [Luthuli] would be the one going to young leaders to tell them to focus on the objectives of what the ANC set many years ago.

"There are a lot of new people in the organisation that still need to be taught the ways of the ANC," said Mashatile.

He warned that it was imperative that the ANC re-focus its energy on unity ahead of next year's centenary celebrations in January and the elective conference in Mangaung in December.

Malema said that, despite the verdicts against him, he would not give up his leadership of the youth league, and said the ANC had no power to suspend him. He said he would appeal his suspension.

"Resigning is not an option. I must be fired. It is not only me [who was charged] it was the entire leadership," he said.

Malema said his resignation would set a precedent for those who succeeded him, forcing them to resign if they were accused of making radical statements.

"So, to save many generations, we have to soldier on in defence of the autonomy of the youth league and its leadership.

"We are a radical and militant voice. It has not started with us, it started with the founding generation in 1944. When you want to destroy this youth league because you are irritated by Malema, then you are wrong. You are destroying the legacy of Nelson Mandela and OR Tambo.

"Why didn't Madiba resign even when he was in a difficult situation like that . 27 years in prison, five years of loitering in the streets. Why must I resign?

"We are fighting a political battle, not a personal battle. Let the enemies celebrate; their celebration will be short-lived. You will never destroy the radical politics of the ANC."