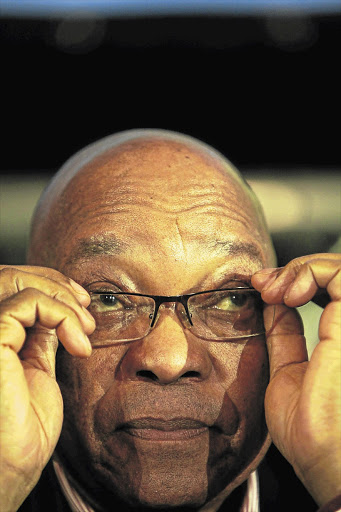 "Government is like God. Quick to hear, but slow to respond."

That was the message President Jacob Zuma had for villagers in Qumbu in the Eastern Cape at the weekend when he encouraged them to return to farming - and not to wait for government hand-outs.

At Tsilitwa village after visiting Gqunu village to promote the Masibambisane agricultural project on Saturday, Zuma said the government - like God - helped those who helped themselves.

"People must go back to farming. They must decide on their own and not be dependent," he said.

"Then they can go to government and ask for assistance with fencing, seeds and so on. We want to improve the lives of rural people. We must not complain about hunger when there is so much land."

Zuma said: "Masibambisane is for the people, it is not political. God helps those who help themselves. He softens the hearts of government and of business owners ."

Accompanied by Minister of Agriculture, Forestry and Fisheries Tina Joemat-Pettersson and Eastern Cape premier Noxolo Kiviet, Zuma promised 1000 goats would be delivered in instalments of 100 to the Gqunu community.

He emphasised the importance of the government and the business sector joining hands to eradicate poverty.

"Our policy at Masibambisane is to sell what we do not use from our gardens. We want to bring back the dignity of our people. We need to reduce meetings and increase action," he said.

Other ministers there made promises to the community on behalf of their respective departments.

Public Works Minister Thembelani Nxesi said they had learnt that there was a river that sometimes overflowed and as a result children drowned.

"We have identified that the river needs a bridge and the road leading to Gqunu is really bad, so those are the instantaneous things that we have acknowledged that need to be fixed. We will also not be using machinery because we want people to get jobs," Nxesi pledged.

Water and Environmental Affairs Minister Edna Molewa promised that her department would spend R2-million in the area.

"We saw a child fetching water from a very dirty well. So we will spend R2-million to bring water tanks to the villagers. There will be other schemes that we will be involved in," Molewa said.

Community member Zandile Mthini said the villagers were glad Zuma had come to visit them.

"We are not a lazy community but we lack resources. I am happy the president has recognised that and is here with people from government and they are ready to help us," Mthini said.