Information bill needed - just not this one 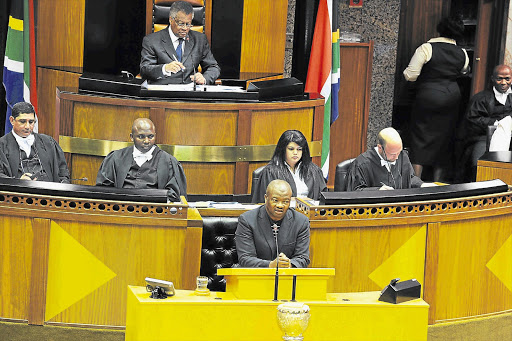 United Democtratic Movement leader Bantu Holomisa explaining on Tuesday why his party would vote against the Protection of State Information Bill Picture: GCIS

It is not too late to remedy the dangers and absurdities in the proposed legislation, writes Dario Milo

ON Tuesday this week, against the background of widespread protests across South Africa, the majority of the parliamentarians in the National Assembly voted in favour of the controversial Protection of State Information Bill.

This does not mean that the bill has become law: it must go to the National Council of Provinces and, if the NCOP rejects the bill or passes it with amendments, it must be reconsidered by the National Assembly.

It then goes to President Jacob Zuma for his assent; he can refer the bill back to parliament if he has reservations about its constitutionality, and, if he is not satisfied that his reservations have been accommodated, can refer it to the Constitutional Court.

In recent weeks, the debate about the bill has become clouded by emotions and wild allegations on both sides of the divide. It is time for a sober analysis.

First, it must be accepted that in principle a law that limits openness in the name of national security is justifiable in a democracy. Our constitution itself permits such a result.

Secondly, the very fact that a bill such as this necessarily limits fundamental constitutional values of openness, transparency and accountability, and restricts access to quintessentially political speech, means that its provisions must be subjected to rigorous interrogation. Its provisions must be truly necessary in our democracy, and must limit constitutional rights in the least restrictive manner possible. In other words, the challenge is to achieve maximum openness while permitting secrecy in very limited and justifiable contexts, where a genuine and real threat to national security arises.

Thirdly, the current draft is a significant improvement both on the first draft introduced in parliament in 2008 by former minister of intelligence Ronnie Kasrils, and the draft introduced by the current Minister Siyabonga Cwele in 2010. Gone is the indefensibly vague notion of the "national interest", which would have resulted in chronic over- classification. Also jettisoned is the original attempt to permit the classification of commercial information. We also now have better thresholds for classifying information, based on demonstrable and not speculative harm to national security, and a Classification Review Committee which, while certainly not beyond criticism, is a step in the right direction.

Fourthly, despite these welcome developments, even a cursory analysis of the bill will reveal that the criminal sanctions it seeks to impose are very stiff indeed:

The wide ambit of these criminal offences is cause for grave concern. The unjustifiably wide net of liability is rendered constitutionally intolerable by the fact that there is no general public interest defence to be invoked by a whistle-blower to disclose information that has been classified (whether correctly or incorrectly) and which the public has a genuine right to know.

Fifthly, the only concession in the bill is that it envisages that employees who are protected under the Protected Disclosures Act, and certain company stakeholders who are entitled to protection under the Companies Act, will have a defence in very limited circumstances to one of the crimes, that of disclosing classified information. But the "protection" afforded in this context is illusory: it will generally only apply to disclosures to a limited category of recipients, such as the public protector and the Companies Tribunal. And it is, of course, not a defence for investigative journalists, community leaders, trade unions or NGOs, for instance, to publish the information to the public at large.

So if classified information revealing wrongdoing is leaked to a journalist, will that information ever see the light of day? The journalist must first report his or her possession of the information and return it to the authorities. He or she must then formally request access to the information, and it will only be declassified by the head of the organ of state which classified the information in the first place, if certain requirements are met.

If the delays that are customary in litigating under the Promotion of Access to Information Act are any indication, it could be years before such information ever sees the light of day, even though the public has a right to know the information immediately.

A public interest defence would allow the journalist in this example to publish without the fear of being arrested for exposing wrongdoing. Of course, careful decisions will need to be made by the journalist and editor concerned about whether the public interest indeed justifies disclosure, and if this decision is wrong, there will be criminal law consequences.

But there is no basis for the suggestion that a public interest defence will simply open the floodgates. If this were so, one would have expected widespread disclosure in recent years of information which truly harmed national security, with no public interest justification. This has not happened.

Finally, the bill is entirely out of touch with the reality of how information is disseminated in our global, digital village. If there is disclosure of classified information in the newspapers of our neighbours, or on a foreign website, this cannot be repeated by South Africans without incurring criminal liability. The bill contains no acknowledgement that once the information has been made public (an act which itself may in the circumstances attract liability), it would be absurd to criminalise its repetition.

The Supreme Court of Appeal last year affirmed that "open and transparent government and a free flow of information concerning the affairs of the state is the lifeblood of democracy". It is not too late for our government to change the bill to ensure that we do not cut off this blood supply.