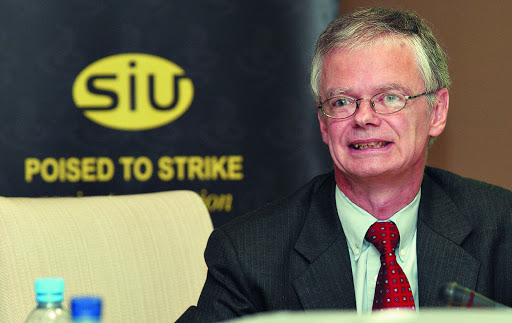 A desperate hunt is under way to trace the secret spy tapes that got President Jacob Zuma off the hook on corruption charges.

In a renewed attempt to get hold of the digital recordings that paved the way for Zuma to become the country's president, the former head of the Special Investigating Unit, Willie Hofmeyr, has written to the Office for Interception Centres asking for its help in obtaining a copy of the 2007 tapes.

"I would also appreciate your guidance on how the SIU can obtain a copy of the recording. I appreciate that an intercept of this nature will be classified," Hofmeyr wrote.

Hofmeyr and Davids have been locked in a bitter legal wrangle since Hofmeyr fired Davids in November 2010 because of what was described as a breakdown in trust and in their professional relationship.

Hofmeyr submitted his request for a copy of the tapes to Koopedi a month after Commission for Conciliation, Mediation and Arbitration commissioner Bart Ford ruled, on September 27 last year, that the Zuma spy tapes and intercepts of the conversations between Davids and McCarthy were obtained in contravention of the Regulation of Interception of Communication Act.

The tapes have since become a nightmare for Zuma, with the DA now also having lodged a Supreme Court of Appeal application to overturn the 2009 decision to halt the president's prosecution.

The case is due to be heard on February 15.

Ford found that evidence relating to the McCarthy/Davids recordings was "detrimental to the administration of justice".

Hofmeyr, however, on December 7 lodged an application with the Johannesburg Labour Court to have Ford's ruling reviewed and set aside.

Central to the alleged recordings that Hofmeyr now seeks - of which there is no transcript or copy - is a telephone conversation Davids is alleged to have had with McCarthy about the ANC's leadership battle. It was this conversation that led to Davids' sacking.

During this conversation - in which Davids recounted a confidential conversation between him, Hofmeyr and former NPA head Bulelani Ngcuka, at East London Airport on December 15 2007 - Hofmeyr alleged that Davids accused him of being disloyal because he did not want to use the unit to support President Thabo Mbeki's bid to retain the leadership of the ANC. Hofmeyr further alleges that Davids had said that "Hofmeyr's neutrality showed that he had switched to the Zuma camp".

During the CCMA hearing, Hofmeyr testified that he and senior National Prosecuting Authority advocate Sibongile Mzinyathi had listened to tapes given to them by Zuma's lawyer, Michael Hulley, in 2009, but they did not receive copies.

In the absence of the tapes, Ford found that there was no tangible evidence, other than Hofmeyr's testimony, that the recordings existed.

Hofmeyr said he had explored all avenues to obtain the tapes but had been unsuccessful.

Last year he testified that the National Intelligence Agency at that time did not have the recordings, and now Hulley, who first made then available, "will not give it to the SIU".

The police's crime intelligence unit has also not responded to a request about whether it has the recordings.

Said Hofmeyr in his letter to Koopedi: "The SIU is prepared to submit a formal application in terms of the Promotion of Access to Information Act for access to the recording, if the OIC has it."

Davids has continued to dispute the existence of the recordings or that he made the statements to McCarthy imputed to him.

This saved his political life and paving the way for him to become South Africa's president.

Mpshe had found that connivance between McCarthy and former NPA boss Bulelani Ngcuka in relation to the Zuma case amounted to "intolerable abuse", and that the charges had been influenced by the political infighting of the time.

No date has been set yet for the review application and both Ford and Davids are yet to respond to Hofmeyr's affidavit.

Hofmeyr's affidavit is scathing of Ford's ruling, with the SIU claiming that Ford committed several gross irregularities during the CCMA proceedings.

VOICE FROM THE 'ZUMA SPY TAPES'

"Davids, uh McCarthy here; just give me a ring please. You sent me a gevaarlike SMS here just before Christmas. I am a Thabo man; I mean we are still wiping the blood from our faces, or egg, or egg and blood, from our faces. Saw the man on Friday evening; we planning a comeback strategy. And once we have achieved that we will clean up all around us my friend. Bye." - Transcript of voicemail: McCarthy to Davids