Zuma tells critics to toe the line or else 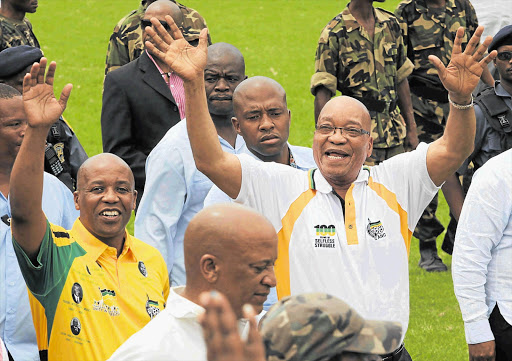 President Jacob Zuma has issued his sternest rebuke to his detractors, warning them they have no future in the ANC if they are ill-disciplined.

Zuma, addressing provincial ANC centenary celebrations in East London yesterday, also took a swipe at those "who defend wrongdoing" within the party.

In what could be interpreted as a veiled attack on errant ANC Youth League leader Julius Malema and his allies, Zuma said: "We must reach a point where discipline is exercised irrespective of the position you hold ... this thing must end where if one comrade is doing wrong things, there are comrades who defend him. That must come to an end."

Zuma was speaking a week after ANC treasurer Mathews Phosa broke ranks with the party's top leadership by appearing to back the embattled youth leader in an address at a centenary rally in Limpopo.

Zuma said to loud applause: "Let's not destroy this organisation of [John] Dube, [Oliver] Tambo and [Nelson] Mandela, you can't be bigger than them."

Zuma received a rapturous welcome when he addressed a capacity crowd at the 16000-seat Absa Stadium.

He did not mince his words as he denounced ill-discipline.

In a speech that could be compared to one he delivered at the ANC national general council in Durban in September 2010, the president said discipline was central to the ruling party's growth.

He warned that those who did not understand the ANC soon found themselves outside the party.

"The ANC is a big party, if you don't understand it you may find yourself on the wrong side of things ... you say stupid things, thinking you are speaking on behalf of the ANC, but soon you find out you are merely blabbing.

"It's a complex organisation ... very difficult to understand," he said.

The ANC, said Zuma, should fight to stamp out factionalism and build political discipline.

The crowd sang "Zuma my president" as he did his walkabout around the stadium.

Zuma's warm reception was significant within the context of the ANC Mangaung conference in December, where he is to seek re-election as party leader.

The positive reception he received in East London will boost his campaign because the Eastern Cape is one of the key provinces he will have to secure if his campaign is to succeed.

The province, with 222000 members, is the second biggest for the ANC after Zuma's home province, KwaZulu-Natal, which has 244000.