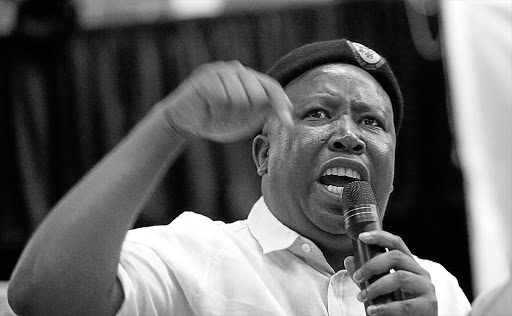 About hundred people demonstrated outside Luthuli House in Johannesburg on Monday, but the protest was unrelated to ANC Youth League leader Julius Malema's disciplinary hearing.

Several police vehicles blocked off parts of Sauer and President streets around the building in anticipation of a greater turnout of supporters.

Prisoner rights activist Golden Miles Bhudu stood on a nearby wall, holding up a placard in support of Malema.

"Cde Cyril [Ramaphosa] do the right thing. There is no case here, only shackles," it read.

Ramaphosa, in his capacity as ANC appeals committee chairman, would hear oral arguments at Malema's hearing at Luthuli House on Monday. Supporters were unsure if the hearing had begun. SABC radio news reported by 11am that it was underway.

"I have been here since six this morning. And I will wait here until we are told what is happening inside," Bhudu said.

The 49-year-old activist said he supported the ANCYL because it was raising issues that "elderly" ANC members had not spoken out on.

"The youth need wisdom from people like us. They have raised very crucial and sensitive issues like land reform and economic freedom... Issues that the elders should have raised."

At noon on Monday a police convoy escorted several vehicles out of the building. Officials nearby refused to confirm whether Malema was one of the passengers.

African National Congress spokesman Keith Khoza said on Monday that party members were instructed not to comment on the hearing.

"The media have been kept out, and we don't know anything about it. The media might receive information once the hearing is completed."

"Don't trouble me with this. I will not say anything about the hearing."

Advocate Patrick Mtshaulana said these detailed why Malema's five-year suspension should be overturned. Malema and other senior ANCYL leaders were suspended in November last year after being found guilty of sowing division within the ANC and of bringing the party into disrepute. This was due to, among other things, comments about bringing about regime change in Botswana.

Mtshaulana said they would try to convince Ramaphosa that they were not given a chance to argue in mitigation of their sentences.

This was because they had previously publicly disagreed with the ANCYL's positions on land reform and the nationalisation of mines. They would further submit that the verdict and sanctions relied on an outdated section of the ANCYL constitution.