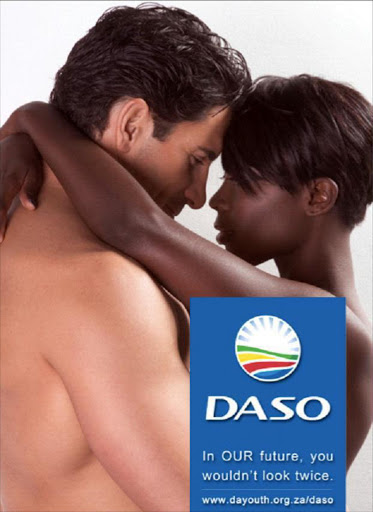 "There are many ways in which the DA could have projected its image as a non-racial party, rather than using a poster clearly promoting sexual promiscuity."

Botha said the poster was "distasteful to the extreme" and an insult to the many young people, black and white, who uphold high moral values.

"In a country with high levels of Aids and an overdose of crime, especially the high incidence of farm murders this year, this poster sends the opposite message to the country than needed."

The poster carried a tagline reading: "In our future you wouldn't look twice".

It received widespread attention on Monday after it was posted online by DA youth leader Makashule Gana.

Gana said the poster was part of a campaign to create debate about race.

"To say that the poster is sexual is taking it to the extreme. The poster is saying a lot. They are embracing each other, and it shows in this country that we can find an opportunity to embrace each other.

"I don't know why there are negative comments about it. It is a work of art that depicts a future that we [the DA] would want to build."

Gana put the picture up on his Facebook page, and briefly used it as his Twitter avatar.

The picture elicited differing comments on both social networking sites.

A Facebook user said: "The nakedness completely diverts from the intended message of political togetherness. Unless politics really is all about sex?"

Another user said: "I don't see something sexual. They did this pic [sic] very well. The pose, the embrace, their expressions. It looks convincing, it looks like love, it looks beautiful."

One Twitter user asked: "Is the DA campaigning on behalf of white sugar-daddies who go after young native chicks?"

Another tweeted: "In my future, I hope those damn townships are gone in Cape Town and all the blacks have moved into Camps Bay to share that view."