Malema's options for a comeback limited 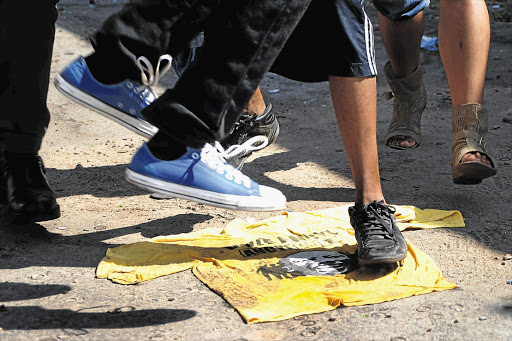 Supporters of Julius Malema's rivals in Polokwane jump on a T-shirt bearing his image in celebration of his suspension from the ANC at the weekend.
Image: CHESTER MAKANA

Embattled ANC Youth League president Julius Malema has few options to consider in his bid to reverse the ruling party's decision to suspend him from his position. He can:

Appeal to the ANC's national executive committee. If he decides to petition the disciplinary appeals body, he will have to lobby hard and make sure he has the numbers to overturn his suspension.

The executive committee, headed by party president Jacob Zuma, will be difficult to convince, following Ramaphosa's stinging rebuke and findings.

Finding friends within the committee, and convincing them to support him, will be a difficult task.

The executive committee, the highest decision-making structure between conferences, has powers to overturn any decision taken against a member, but the question remains whether Malema has enough support to achieve that outcome.

Use the Mangaung conference. But, to survive, he will have to convince ANC members in Mangaung in December to oust Zuma and ANC secretary-general Gwede Mantashe.

If members agree, and do remove Zuma, Malema could return and continue to fight for his nationalisation policies.

Go to court. Though many in the ANC have taken this route, no one has emerged as a winner.

If Malema opts to take the ANC to court he will immediately be expelled, in accordance with an ANC ruling forbidding members from taking this option.