ANC hits back at union over leadership ruckus 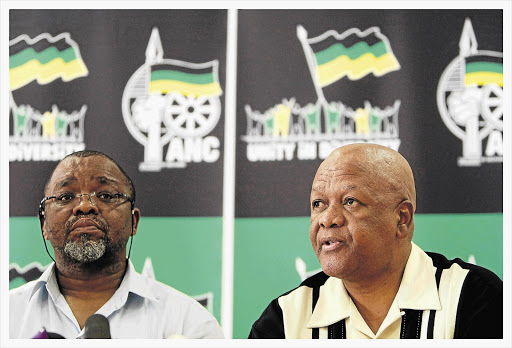 ANC secretary-general Gwede Mantashe has slammed the National Union of Metalworkers of SA, saying it was "politically dangerous" for it to seek changes in the ruling party's top leadership.

Last week, Numsa deputy general secretary, Karl Cloete, said the current ANC leadership should be replaced in Mangaung in December because it had failed to implement all the resolutions adopted at the ruling party's elective conference in Polokwane in 2007. Addressing journalists before the ANC's special national executive committee meeting at St George's Hotel in Centurion, Pretoria, yesterday, Mantashe said the union's statement that it would try to effect a leadership change at branch level was not only a "myth" but tantamount to dangerous politics. Mantashe said union leaders [must] familiarise themselves with ANC processes before making public statements.

Last week, President Jacob Zuma told the union that if it wanted to effect policy changes within the ANC, it should elect its members to the party's national executive committee.

Mantashe reminded Numsa of its status in the ANC alliance.

"I think when people decide to be bold about what should be changed, what should be said in the ANC is an exaggeration of the role of interaction of allies.

"I think it is a dangerous and an adventurous position taken by Numsa because, once you make statements like that to say because you [ANC] don't do this, there will be changes here, they make an assumption that there is no ANC, there is everybody else except the ANC," he said.

"It is a tendency to wait in the wings and think that at the right moment you will take over an organisation. It's not done, it's politically dangerous.

"So I don't want us to elevate the myth of the takeover of the ANC into reality. It is a myth. It can't happen in an organisation that has one million members already.

Mantashe also said discussion documents for the party's policy conference would be made public next week.