Deputy President Kgalema Motlanthe will attempt to unseat Jacob Zuma as president of the ANC at the party's national conference in December. 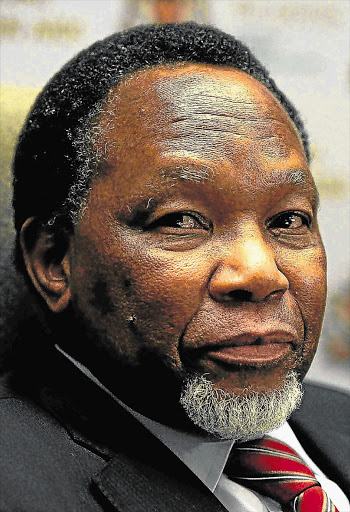 This is according to senior Motlanthe aides and party insiders, who say the deputy president has decided that he will stand for office if nominated by party branches.

"He will accept nomination even if he is nominated by only two [of the nine] provinces," said a Motlanthe aide, who asked not to be named because the ANC has not officially opened the leadership race.

The party's national executive committee decided last year that nominations for leadership posts ahead of the national conference in Mangaung, Free State, would be opened to branches only in October.

It is widely expected that Zuma will make himself available for a second term as party president, but until now it has been unclear whether Motlanthe was ready to challenge him, despite calls by the ANC Youth League to do so.

Those agitating for change in December want Motlanthe to take over, and are touting the Minister of Home Affairs, Nkosazana Dlamini-Zuma, and the Minister of Defence, Lindiwe Sisulu, as possible deputies.

Zuma's campaigners have said they will support Motlanthe's retention as deputy president on condition that he does not stand against the president.

Zuma is regarded as having the upper hand, as he enjoys the backing of the party's strongest province, KwaZulu-Natal, his home province.

He also commands considerable support in the Eastern Cape, which is the ANC's second-most influential province, although Zuma's support has declined at two recent conferences in that province.

Likely to throw their weight behind Motlanthe are party structures in Gauteng, Limpopo, North West and the Northern Cape.

Although the Free State and Mpumalanga have always been regarded as Zuma strongholds, his support hinges on the re-election next month of Ace Magashule and David Mabuza as chairmen of the two provinces, respectively.

Both provincial leaders face challenges by groupings aligned to a national campaign to oust Zuma.

ANC insiders in the past have said Motlanthe would accept the nomination only if he was guaranteed that Zuma would not run.

This was due to fears of another succession race so soon after the 2007 presidential race that nearly split the ANC.

Supporters of Zuma's second-term bid have also argued in the past that Motlanthe would not challenge his boss, as he knew that if he lost, Zuma would retaliate by sacking him from the government.

But a senior aide said Motlanthe - who served as South Africa's president for eight months following president Thabo Mbeki's forced resignation in 2008 - was not perturbed by the possible consequences of standing against Zuma.

"Remember, he is a retired president. He is a pensioner. So he has nothing to lose. Even now he doesn't get a salary from his position as deputy president. He accepted the position because the president asked him to.

"It can't be said that if he loses, will [Zuma] continue to work with him? He is not worried about that," said a senior aide.

Contacted for comment, Motlanthe's spokesman, Thabo Masebe, said the deputy president was not willing to entertain any talk of succession.

But ANC insiders close to Motlanthe insisted he would accept nomination. They said it was not his style to openly campaign for leadership positions.

"Motlanthe is of the view that structures of the ANC are free to think and say who they want. Leaders should not involve themselves in that process. If the structures want to nominate him, they will do so and he will accept," said a close ally.

He added: "He says you can't stand up as a leader and say, 'Here I am, vote for me.' His view is that when you are elected in that fashion, you'll be indebted to your campaign managers. Leaders must stay clear of lobby groups."

Uncertainty over whether Motlanthe would be willing to stand had left opponents of Zuma's second-term bid frustrated, as they did not know if their preferred candidate would avail himself for election.

But Motlanthe's aide said party structures did not need his permission to lobby for him.

"His view is that people don't need his permission to nominate him, so he won't get involved in campaigning. The minute he joins a lobby group, that means he can't lead the people who are not part of his lobby group."

The y outh league has been most vocal in campaigning against Zuma, but Motlanthe backers believe the imminent removal of its president, Julius Malema, will not weaken their campaign.

In fact, they argue, with Malema out of the picture, those who backed Zuma merely because they did not like Malema may be willing to look at other candidates on merit.